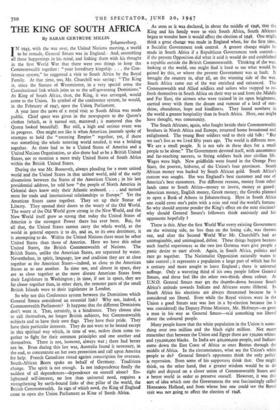 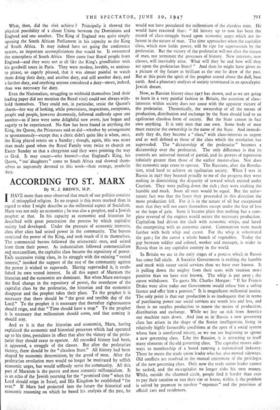 THE KING OF SOUTH AFRICA

IN 1945, with the war over, the United Nations meeting, a world to be remade, General Smuts was in England.- And, assembling all these happenings in his mind, and linking them with his thought in the first World War that there were two things to keep the Commonwealth together : " your hereditary kingship. . . . the Con- ference system," he suggested a visit to South Africa by the Royal Family. At that time, too, Mr. Churchill was saying : " The King is, since the Statute of Westminster, in a very special sense the Constitutional link which joins us to the self-governing Dominions." As King of South Africa, then, the King, it was arranged, would come to the Union. In symbol of the conference system, he would, in the February of 1947, open the Union Parliament.

A year later the news of a royal visit to South Africa was made public. Chief space was given in the newspapers to the Queen's clothes (which, as it turned out, mattered ; it mattered that the Queen looked beautiful). But still, a high and serious event was in progress. One might not like it when American journals spoke of attempts to hold the " tottering Empire " together, yet, if there was something the whole tottering world needed, it was a holding together. As there had to be a United States of America and a United Nations Organisation, so also there had to be a British United States, not to mention a more truly United States of South Africa within the British United States.

During the war Mr. Roosevelt, always pleading for a more united world and the United States in that united world, told of the early dissensions between the States of the American Union ; in his last presidential address, he told how " the people of North America in Colonial days knew only their Atlantic seaboard. . . . and turned most for trade and international relationships to Europe." Yet the American States came together. They set up their Statue of Liberty. They opened their doors to the weary of the Old World. The weary of the Old World grew strong in the New World, and the New World itself grew so strong that today the United States of America is the strongest Power there has ever been. But, for all that, the United States cannot carry the whole world, as the world in general expects it to do, and as, to its own detriment, it is attempting to do. Within the United Nations there must be other United States than those of America. Here we have this other United States, the British Commonwealth of Nations. The British States, unlike the American States, are separated by water. Nevertheless, in spirit, language, law and tradition they are as close together as the American States—indeed, as close to the American States as to one another. In time too, and almost in space, they are as close together as the more distant American States from their Legislature in Washington ; in time, if not in space, they are far closer together than, in other days, the remoter parts of the small British Islands were to their legislature in London.

So why not this Conference system between the Dominions which General Smuts considered an essential link? Why not, indeed, a Commonwealth Parliament? It happens that the different Dominions don't want it. That, certainly, is a hindrance. They choose also to call themselves, no longer British subjects, but Commonwealth subjects and to have their own flags. They have their pride. They have their particular interests. They do not want to be bound except in this spiritual way which, in time of war, makes them come to- gether to fight for their common principles and one another and themselves. There is not, however, always war ; there had better not be. Even during this last war, Australia found it necessary, in the end, to concentrate on her own protection and call upon America for help. French Canadians rioted against conscription for overseas. South-African Boers spoke on behalf of Germany. Traditions change. The spirit is not enough. Is not independence finally the saddest of all dependences—dependence on oneself alone? En- lightened self-interest, no less than universal need, requires a strengthening by earth-bound links of that pillar of the world, the British Commonwealth. In sign of which need, the King of England came to open the Union Parliament as King of South Africa. As soon as it was declared, in about the middle of 1946, that the King and his family were to visit South Africa, South Africans began to wonder how it would affect the election of 1948. One might think a great change was made in England when, for the first time, a Socialist Government took control. A greater change might be made in South Africa if a Republican Government took control— if the present Opposition did what it said it would do and established a republic outside the British Commonwealth. Thinking of the war, looking at the world, one might find it hard to see what would be gained by this, or where the present Government was at fault. It brought the country in, after all, on the winning side of the war. South Africa came out of the war enriched and enhanced. The Commonwealth and Allied soldiers and sailors who stopped to re- fresh themselves in South Africa on their way to and from the Middle and Far East; the airmen who were trained in its open brightness, carried away with them the dream and rumour of a land of sun- shine, abundance, hope and kindliness. They found nowhere in the world a greater hospitality than in South Africa. Here, one might have thought, was community.

The South Africans, again, who fought beside their Commonwealth brothers in North Africa and Europe, returned home broadened and enlightened. The young Boer soldiers said to their old folk : " But we can't live as we lived fifty years ago. The world is different now. We are a small people. It is not safe in these days for a small people to be alone." The Government devoted itself, with uncommon and far-reaching success, to fitting soldiers back into civilian life. Wages were high. New goldfields were found in the Orange Free State, the poorest, hitherto, of the Union's four provinces. South African money was backed by South African gold. South Africa's custom was sought. She was England's best customer and one of America's best customers. For different reasons, money from other lands came to South Africa—money to invest, money to guard: American money, English money, Greek money; the Greeks planned to open a Bank of Athens in Johannesburg. Here in South Africa one could cross one's palm with a coin and read the world's fortune. So why should anyone ponder the King's effect on the next election? why should General Smuts's followers think anxiously and his opponents hopefully ?

There is this. After the first World War every existing Government on the winning side, no less than on the losing s:de, was thrown out, and after. the Second World War Mr. Churchill's had an unimaginable, and unimagined, defeat. These things happen because such fearful experiences as the two last German wars give people a panic desire to start afresh. Again, in South Africa, politics and race go together. The Nationalist Opposition naturally wants tc take control ; it represents a population a large part of which has for a century and more sought to leave England ; there is universal suffrage. Only a wavering third of his own people follow General Smuts, and these feel like the other two-thirds about colour. At U.N.O. General Smuts may get the thumbs-down because South Africa's attitude towards Indians and Africans seems illiberal. In South Africa his elections are always threatened because he is considered too liberal. Even while the Royal visitors were in the Union a good Smuts seat was lost in a by-election because (so it was considered) the Deputy,Prime Minister, Mr. Hofmeyr—as great a man in his way as General Smuts—said something too liberal about the coloured people.

Many people know that the white population in the Union is some- thing over two million and the black eight million. Not many remember that between the Union and Egypt there are 15o,000 whites and 15o,000,000 blacks. In India are 420,000,000 people, and Indians come down the East Coast of Africa as once Bantus through the middle of Africa. In the circumstances, what are the Union's white people to do? General Smuts's opponents think the only policy is repression. Even some of his supporters think that. One might think, on the other hand, that a greater wisdom would be to do right and depend on a closer union of Commonwealth States and a better world in order to preserve oneself. However, it was this sort of idea which cost the Government the seat fascinatingly called Hottentots Holland, and from whose loss one could see the Royal visit was not going to affect the election of 1948.

What, then, did the visit achieve ? Principally it showed the physical possibility of a closer Union between the Dominions and England and one another. The King of England was quite simply opening the South African Parliament in his capacity as the King of South Africa. It may indeed have set going the conference system, an important accomplishment that would be. It sweetened the atmosphere of South Africa. Here came four Royal people from England—and they were not at all like the King's grandfather with his goodwill tours in Paris. They were modest, lovable, so anxious to please, so eagerly pleased, that it was almost painful to watch them doing their duty, and another duty, and still another duty, and a further duty, and anything anyone considered a duty—more, indeed, than was necessary for duty.

Even the Nationalists, struggling to withhold themselves (and their leading paper did not mention the Royal visit) could not always with- hold themselves. They could not, in particular, resist the Queen's charm—her way of looking, while processions, inspections, receptions, people and people, however decorously, followed endlessly upon one another—as if here were some delightful new event, just begun and eagerly to be experienced. No flaw has been found in anything the King, the Queen, the Princesses said or did—whether by arrangement or spontaneously—except that a cleric didn't quite like it when, once, the King played tennis on a Sunday ; though, again, this was more than made good when the Royal Family went twice to church on Easter Sunday so that a clergyman said they were pointing the way to God. It may count—who knows?—that England's King, his Queen, " our-daughters " came to South Africa and showed them- selves so supremely devoted to this work—their strange, symbolic duty.