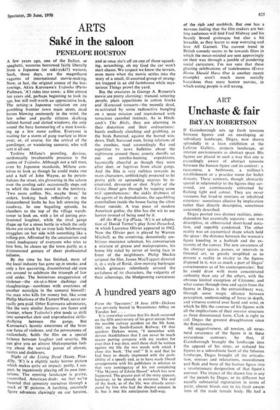 ARTS Sake in the saloon

A few years ago, one of the Italian, or spaghetti, westerns borrowed fairly liberally from a Japanese (or suki-yaki?) western. Such, these days, are the magnificent vagaries of international movie-making. Now, at last, the original source of the bor- rowings, Akira Kurosawa's Yojimbo (Paris- Pullman, 'A') rides into town: a film almost ten years old, perhaps beginning to look its age, but still well worth an appreciative look. The setting: a Japanese variation on any gambling frontier town main street, dead leaves blowing ominously in the wind, the few sober and pacific citizens skulking behind barred and slatted windows, the only sound the busy hammering of a man knock- ing up a few more coffins. Everyone is waiting for a storm of gang warfare to blow over; or, of course, for the arrival of the gunslinger, or wandering samurai, who will sort it all out.

Toshiro Mifune's prowling, devious, sardonically invulnerable presence is the centre of Yojimbo. Although not a tall man, even by Japanese standards, Mifune con- trives to look as though he could make one and a half of John Wayne, as he peram- bulates the street, sits glowering in the saloon over the cooling sake, occasionally steps out to whirl the fastest sword in the territory. 'Two more coffins. No, maybe three,' he orders, looking back reflectively at the dismembered limbs he has left strewing the roadway. In one beguiling episode, he clambers to the top of the village watch- tower to look on, with a lot of jeering pro- fessional laughter,. while the rival gangs shape up for a street battle in which the only blows are struck by an irate lady belabouring stragglers on her side with something like a rolling-pin. Affronted by the amateurism and venal inadequacy of everyone who tries to hire him, he cleans up the town Partly as a disinterested gesture of sheer professional tidiness.

By the time he has finished, most of the local industry has gone up in smoke, and only a few quavering, discomforted old men Are around to celebrate the triumph of law and order. The boisterous exaggeration of violence—the six-at-a-blow slashings and slaughterings—combines with overtones of another nostalgia in the samurai himself: the man who kills for money but, like some Philip Marlowe of the Eastern West, never ac- tually gets paid. Other Kurosawa adventures, like the very similar Sanjuro, are faster and funnier, where Yojimbo's plot tends to drift into somewhat slow and unproductive shilly- shallying between the gangs. But Kurosawa's laconic awareness of the brus- que farce of violence, and the permanence of melancholy, holds the film on a special balance between laughter and severity. He can give you an almost Shakespearian feel- ing about the survival power of clowns, rustics and dodderers.

Night of the Living Dead (Jacey, Pica- dilly, 'X') is a slightly tacky horror picture which makes quite an impact; partly, I sus- pect, by ingeniously playing off its own limi- tations. The opening landscape is grainy, countrified, American-drab: we feel we've haunted that cemetery ourselves through a stack of 'B' pictures. A lurching, uncomely figure advances clawingly on our heroine,

and at once she's off on one of those squeak- ing, scrambling, oh my God the car won't start chases. We suspect we know the terrain, even more when the movie settles into the story of a small, ill-assorted group of strang- ers trapped in an old farmhouse while mys- terious Things prowl the yard.

But the creatures in George A. Romero's movie are pretty alarming: tranced, tottering people, plain apparitions in cotton frocks and ill-creased trousers—the recently dead, re-activated by some radioactive bungling on a space mission and reawakened with voracious cannibal instincts. As in Hitch- cock's The Birds, they are alarming in their distortion and their ordinariness: hands endlessly clutching and grabbing, as the birds fluttered, against the barred win- dows. Dull, harassed men, living relations of the zombies, read astoundingly flat and repetitive Tv news bulletins about the nightmare around them; county sheriffs set out on zombie-hunting expeditions, laconically cheerful as though they were after deer, or fugitives from chain gangs. And the film is very ruthless towards its main characters, unblinkingly prepared to let pretty girls or upstanding negroes be in- cinerated, devoured or shot. Night of the Living Dead gets through by tapping some real apprehensions: the sickly drabness of the agents of its depredations, the squabbling cannibalism inside the house facing the silent threat outside. A true piece of modern American gothic, the film has the wit to use horror instead of being used by it.

All the Way Up (Plaza, 'A') is an adapta- tion of David Turner's play Semi-Detached, in which Laurence Olivier appeared in 1962. Now the Olivier part is played by Warren Mitchell, as the conniving, dementedly am- bitious insurance salesman, his conversation a mixture of grease and malapropisms, his home life ruled by terror of losing face in front of the neighbours. Philip Mackie scripted the film, James MacTaggart directed it, in a style of florid, slow-moving burlesque which grimaces relentlessly around the awfulness of its characters, the vulgarity of their schemings, the bludgeoning caricatures of the rich and snobbish. But one has a nervous feeling that the film-makers are bet- ting audiences will find Fred Midway and his beastly brood grotesque but also a bit loveable, as they learnt to stop worrying and love Alf Garnett. The current trend in British comedy seems to be towards films in which the mean-minded are sent approvingly on their way through a jumble of pandering social caricature. I'm not sure that these gloating celebrations of tastelessness (Every Home Should Have One is another recent example) aren't much more socially hazardous than mere horror movies, in which eating people is still wrong.