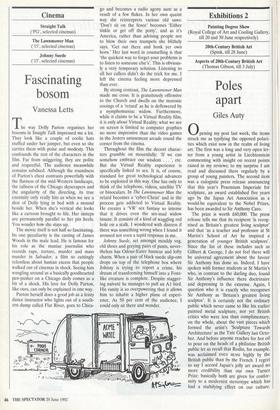 The way Dolly Parton organises her bosoms in Straight Talk impressed me a lot. They look like a couple of coolie hats stuffed under her jumper, but even so she carries them with poise and modesty. This confounds the rest of the characters in the film. Far from sniggering, they are polite and respectful. The audience meanwhile remains subdued. Although the roundness of Parton's chest contrasts powerfully with the flatness of the mid-Western landscape, the tallness of the Chicago skyscrapers and the angularity of the directing, its true enormity only really hits us when we see a shot of Dolly lying in bed with a mound beside her. When she's vertical she looks like a cartoon brought to life. Her insteps are permanently parallel to her pin heels. You wonder how she stays up.

The movie itself is not half so fascinating. Its one peculiarity is the casting of James Woods in the male lead. He is famous for his role as the maniac journalist who records rape, torture, murder and mass murder in Salvador, a filrn so cuttingly relentless about human excess that people walked out of cinemas in shock. Seeing him wangling around as a basically goodhearted pen-pusher on a Chicago daily comes as a bit of a shock. His love for Dolly Parton, like ours, can only be explained in one way.

Parton herself does a good job as a feisty dance instructor who lights out of a south- ern dump called Flat River, goes to Chica-

go and becomes a radio agony aunt as a result of a few flukes. In her own quaint way she reinterprets various old saws: 'Don't sit on the fence' becomes `Either tinkle or get off the potty', and as it's America, rather than advising people not to blow their own trumpets she blithely says, `Get out there and honk yer own horn.' Her last word in counselling is that `the quickest way to forget your problems is to listen to someone else's'. This is obvious- ly a very temporary solution. Listening to all her callers didn't do the trick for me. I left the cinema feeling more depressed than ever.

By strong contrast, The Lawnmower Man made me cross. It is gratuitously offensive to the Church and dwells on the moronic cooings of a `retard' as he is deflowered by a nymphomaniac widow. Furthermore, while it claims to be a Virtual Reality film, it is only about Virtual Reality: what we see on screen is limited to computer graphics no more impressive than the video games in the Jesters amusement arcade round the corner from the cinema.

Throughout the film the decent charac- ters grumble on mournfully: 'If we can somehow embrace our wisdom . . . ', etc. But the Virtual Reality experience is specifically linked to sex. It is, of course, standard for great technological advances to be exploited in this way. One has only to think of the telephone, videos, satellite TV or binoculars. In The Lawnmower Man the retard becomes a `cyber-Christ' and in the process gets addicted to Virtual Reality. He creates a `VR' sex fantasy so intense that it drives even the sex-mad widow insane. It consists of a kind of waggling red hole on a stalk. I wondered with distress if there was something wrong when I found it aroused not even a tepid response in me.

Johnny Suede, set amongst mouldy veg, old shoes and greying pairs of pants, never- theless has Odour-Eater hauteur and lofty charm. When a pair of black suede slip-ons drops on top of the telephone box where Johnny is trying to report a crime, his dream of transforming himself into a Fonz- like creature is complete. Despite stagger- ing naïveté he manages to pull an Al bird. His vanity is so overpowering that it allows him to inhabit a higher plane of experi- ence. As 50 per cent of the audience, I could only sit there and wonder.