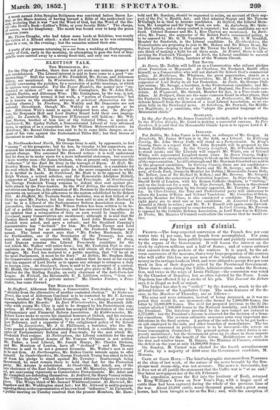 For the City of London, there does not yet seem

any serious prospect of new candidatures. The Liberal interest is said to have come to a good "un- derstanding." Still the names of Mr. Freshfield Mr. Bevan, and Alderman SidneY, are mentioned. In Westminster, inster, Mr. John Villiers Shelley is now ectirely canvassing the parishes, by a succession of public meetings, at which he appears very successful. For the Tower Hamlets, the names now "an- nounced or spoken of" are those of Mr. Coningham, Mr. W. John Hall, captain Burton, and Alderman Wire. [Mr. Coningham, by the way, is not, as we inadvertently termed it last week, a "patron of Communism," but be is known as the steadfast advocate of practical Association for the working classes.] In .Finsbury, Mr. Wakley and Mr. Duncornbe are not seriously threatened, though Mr. Wakley is not so popular as he was. Alderman Wire's name is again whispered here also. In Margie- bone, Sir Benjamin Hall and Lord Dudley Stuart hold their own impreg 'Ably. In Lambeth, Mr. Tennyson D'Eyncourt will hold on : Mr. Wil Ham Hawes, brother of him late of the Colonial Office, is spoken of. Southwark, Mr. Apsley Pellatt, a Nonconformist Liberal of very advanced views, is spoken of as a competitor for Sir William Molesworth's seat. In Middlesex, Mr. Bernal Osborne was said to be in some little danger, on ac- count of his vote against the Ecclesiastical Titles Bill ; but that breeze of discontent is now lulled.

In Northumberland North, Sir George Grey is said, by opponents, to feel "uneasy" at his prospects ; but he has, by circular to his supporters, an- nounced his intention to stand by his seat. At Carlisle there is to be an im- portant change. The esteemed Mr. Howard retires : it is well understood that he does so to make room for a more influential statesman, but scarcely a more worthy man—Sir James Graham, who at present only represents the "influence" of the .Earl De Grey in the borough of Ripon. At Hull, Mr. Brambly Moore, the Liverpool merchant, a Protectionist, is a candidate for the seat which Mr. M. T. Baines quits for the more congenial one to which he is invited in Leeds. At Gateshead, Mr. Hutt is to be opposed by Mr. Ralph Waters, a retired solicitor, and the Honourable Adolphus Riddell, &supporter of Lord Derby in everything but Free-trade. At Scarborough, Mr. George Frederick Young remains to defend that seat against pro- bable attack by the Free-traders. In the West Biding, the utmost the Con- servatives can hope for, is the retention of Mr. Denison by the tolerance of their opponents on account of his adherence to the system established by Sir Robert Feel. At Sheffield, Mr. Toulmin Smith, a barrister, was at first talked of as likely to eject Mr. Parker, but has since been said to aim at Mr. Roebuck's seat: he is a Liberal of the Parliamentary Reform Association stamp. In Lancashire, the Conservative Mr. Wilson Patten has been written to on be- half of a public meeting at Burnley, and has answered that he adheres to his opinion that a reimposition of duty on corn would be impolitic. At .Liverpool, many Conservatives are mentioned ; although it is said that Sir Thomas Birch and Mr. Cardwell are safe. Lord John Manners and Mr. Homfall were asked, and gave a refusal; and Sir Stratford Canning's representative has "declined" for him. Mr. Charles Turner and Lord Naas were hoped for as candidates ; an& Sir Frederick Thesiger was named. The latest report says that "Mr. Forbes Mackenzie, M.P. for Peebleashire, one of the Secretaries of the Treasury, has con- sented to stand in conjunction with Mr. Charles Turner." At Bury, Lord Duncan remains the Liberal Free-trade candidate for the seat which Mr. Walker will retire from ; but Mr. Frederick Peel is also a candidate on the Free-trade interest, who will obtain all the Conservative suffrages. Mr. Peel has declared to a public meeting, that "if he sit in the next Parliament, it must be for Bury." At Bolton, Mr. Stephen Blair, the Conservative candidate, admits in an address that he must so far except from his support of Lord Derby as to oppose any attempt to reimpose a duty on foreign corn. At Stockport, there is said to be no prospect of a contest. Mr. Heald, the Conservative Free-trader, must give place to Mr. J. B. Smith, Member for the Stirling Burghs, an early chairman of the Anti-Corn-law League. At Walsall, the Honourable E. R. Littleton retires, "from cir- cumstances entirely of a private nature." Mr. Charles Forster, a Free- trader, has come forward.

At Stafford, Alderman Sidney, a Conservative Free-trader' retires: he "ahrinirs from the alternative of another contested election." At Stoke-on- Trent, the seat of Alderman Copeland is to be Contested by Mr. F. Leveson Gower, brother of the Whig Earl Granville, as "a colleague of your tried representative Mr. Ricardo." In East Worcestershire the Maynooth diffi- culty with young Mr. Clive is said to be dropped by his Protectionist sup- porters. At Worcester, Mr. Laslett has accepted the invitation of the local Parliamentary and Financial Reform Association. At Kidekrminster, Mr. Robert Lowe seeks to crown his classical honours at Oxford, and his success- ful career as an Australian colonist, by a seat in Parliament. He is a stanch Law Reformer, and a supporter of " the enlightened policy of Sir Robert Peel." In Leominster, Mr. J. G. Phillimore, a barrister, who like Mr. Lowe passed a distinguished studentship at Oxford, is a candidate on prin- ciples of Parliamentary Reform and Free-trade, for the seat which Mr. Frederick Peel resigns. At Nottingham, the Liberal candidate for the seat vacant by the political demise of Mr. Feargus O'Connor is not settled. Mr. Fisher, a local Liberal, Mr. Joseph Sturge, Mr. Charles Dickens, and Mr. Morrison of London, have all " declined " ; and Mr. Thomas

Gisborne is said to be not a general favourite. Mr. Walter's seat is said

to be not firm. At Northampton, Mr. Raikes Currie intends again to offer himself. In Cambridgeshire, Mr. George Frederick Young has asked to be let Off from his pledge to stand against Mr. Townley : Scarborough being threatened, he must remain there to hold that fast for the Protection pirty. Mr. Adeane is substituted. At Cambridge, Mr. Astell, son of the late chairman of the East India Company, and Mr. Macaulay, Queen's coun- sel, are canvassing vigorously as Conservative Protectionists. Mr. Adair and Mr. Campbell are defending themselves. At Bedford, Sir Harry Verney retires. The " Ultra-Radicals " will ask their townsman Alderman Palgrave to take his lace. The Whigs think of Mr. Samuel Whitbread junior. At Harwich, Mr. nagehiaw and Mr. Waddington stand fast ; but Mr. Attwood is said to purpose Opposing them as the representative of his own local influence." At Yarmouth, a public meeting on Tuesday resolved that the present Members, Mr. Rum- bold and Mr. Sandurs, should be requested to retire, on account of their sup- port of the Put'ic Health Act ; and that Admiral Napier and Mr. Torrens M`Cullagh be it.dted to become candidates. At Oxford, the Liberal Mem- bers, Mr. Langston and Sir Page Wood, are safe. As Aylesbury, Mr. Quin- tin Dick retires, and a sharp contest is expected ; but the candidates are not fixed. Colonel Hanmer and Mr. L. Rice Clayton are mentioned. In Berk- shire, Mr. Piney, the supporter of Sir Robert peel's commercial policy, is to be opposed by Mr. G. H. Vansittart. At Windsor, Mr. C. W. Iarenfell, Member for Sandwich, is the Liberal candidate. In Hertfordsh ire, the Protectionists are proposing to join to Mr. Halsey and Sir Henry Meux, Sir Bulwer Lytton—hoping to shut out Mr. Trevor the Liberal ; but the Libe- rals think of making a fight for all three seats. At Bristol, there is talk of inviting Sir Frederick Thesiger. At Bath, the Liberal candidate to succeed Lord Duncan is Mr. Phinn, barrister of the Western Circuit

At Dover, Mr. Bodkin will hold on as a Conservative who refuses pledges about Protection or Maynooth. At Chatham, Sir Frederick Smith offers himself, as a Conservative who will not disturb Sir Robert Peel's commercial policy. At Maidstone, Mr. Whatman, the great papermaker, stands as a Free-trader and Reformer. In Dorsetshiret Mr. H. C. Sturt will stand as a supporter of Lord Derby in all but Protection. At Poole, Sir George Phil- lips retires : Mr. Savage, a barrister, is the Protectionist candidate ; and Mr. Kirkman Hodgson, a Director of the Bank of England, the Free-trade can- didate. At Weymouth-, Mr. Oswald, Member for Ayr, is a Free-trade can- didate. At Bridport, there arc the same rumours found in other places, that Sir Frederick Thesiger will be a candidate. At Bridgewater, Mr. Kinglake defends himself from the dictation of a local Liberal Association, as we ex- plain fully in the Provincial news. At Salisbury, Mr. Pownall, the Middle- sex Magistrate, is a candidate, who "adopts the guarded language of the Ministerial chiefs."

In the Ayr Burghs, Sir James Campbell is invited ; and he is considering. In the Wigton Burghs, Mr. Caird is making a successful canvass. In For- farshire, it is said that the Honourable Claude Lyon is to oppose Lord J. F. Gordon Hallyburton.

For Dublin, Mr. John Vance is to stand, as colleague of Mr. Grogan. At _Drogheda, Mr. James M'Cann is in the field, as a Liberal. In Kilkenny County, Mr. John Otway Cuffe will stand as a Protectionist. In King's County, there is a report that Mr. John Reynolds will be proposed by the Roman Catholic clergy. In the County Longford, Mr. O'Ferrall declines to stand again; and the Liberals will support Mr. White, son of Colonel White, who represented Longford many years. In Down County, thel te- nant-farmers are energetically working to break up the Protectionist monopoly of the representation : Lord Castlereagh and Mr. Sharman Crawford are said to be the proposed candidates. In Galway County, there are six candidates— the present Members, Sir Thomas Burke and Mr. St. George ; and Mr. Gre- gory, of Coole Park, (formerly Member for Dublin,) Honourable James Daly, Mr. Bellew, (son of Sir Michael D. Bellew,) and Mr. Browne. Mr. Gregory is said to think the restoration of Protection hopeless. In Sligo County, Mr. Sheriff Swift of London, with his Roman Catholic chaplain, is "visiting," and on the look-out for a seat. In Sligo Borough, Mr. Somers is threatened with formidable opposition by his former opponent, Mr. Townley, of Town- ley. In Clare County, the Tory and Protectionist party will endeavour to return Sir Lucius O'Brien and Colonel Vandelour. Mr. Cornelius O'Brien, formerly Member for Clare, is also considered a candidate. The Tenant- right party are to start one or two candidates. At Limerick .City, Lord Arundel is likely to retire ; and Mr. W. F. Russell will again come forward. Mr. Sheriff Swift is expected to come forward. In Cork County, Mr. Frewen is opposed by the Catholic Defence Association, as Lord Naas was in Kildare. At Treks, Mr. Maurice O'Connell contradicts the rumour that he would re- tire.