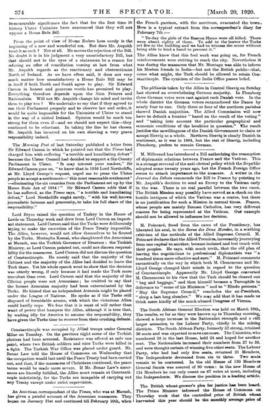 The South African General Election was held on March 10th.

The results, so far as they were known up to Thursday morning, showed a large increase in the Nationalist strength and a still larger accession to the Labour Party, chiefly in the mining districts. The South African Party, formerly 52 strong, retained 38 seats and was expected to save one more. The Unionists, who numbered 38 in the last House, held 24 and hoped for another seat. The Nationalists increased their numbers from 27 to 39, and were thought certain of winning-five other seats. The-Labour Party, who had had only five seats, returned 21 Members. The Independents decreased from six to three. Two seats remain to be contested. In the old House of 130 Members General Smuts was assured of 90 votes : in the new House of 134 Members he can only eeunt on-67 votes at most, including the Independents. We discuss the position in. a. leading article.