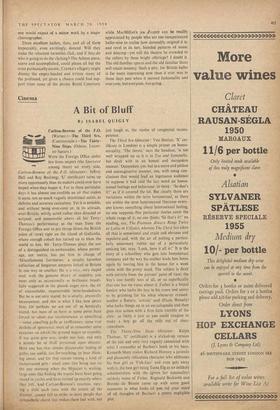 A Bit of Bluff

By ISABEL QUIGLY Carlton-Browne of the F.O.

(Warner.)—The Third Sex. (Continentale.)—The Thirty- Nine Steps. (Odeon, Leices- ter Square.) WITH the Foreign Office under s4461•=0""'" fire from snipers (the Spectator among them) on every side, Carlton-Browne of the F.O. (directors : Jeffrey Dell and Roy Boulting; `Ll' certificate) turns up more opportunely than its makers could ever have hoped when they began it. For in these particular days it has almost too credible an air that makes it seem, not so much vaguely intentional satire, as definite and accurate caricature. Yet it is amiable, and without being over-cosy or, in its attitude, over-British; wittily acted rather than directed or scripted, and memorable above all for Terry- Thomas's performance as the man from the Foreign Office sent to put things (from the British point of view) right on the island of Gallardia, where enough cobalt has turned up to blow the world to bits. Mr. Terry-Thomas plays the son of a distinguished ex-ambassador, whose parent- age, not merits, has put him in charge of `Miscellaneous Territories,* a usually harmless collection of forgotten outposts linked to Britain in one way or another. He is a very, very stupid soul, with the genuine bran,i of stupidity you meet only as occasionally 41 brilliance beauti- fully suggested in the glazed, eager eyes, the air of unassailable, impenetrable bone-headedness. But he is not only stupid, he is utterly, abysmally incompetent, and this is what I like best about him; for perhaps we are not all as .heroically stupid, but most of us have at some point been forced to admit our incompetence at something —some appalling gaffe or inefficiency, some vast pothole of ignorance; most of us remember some occasion on which the ground began to crumble, if not quite give way. under our feet, and only a nimble hit of bluff prevented open disaster. Here one has that almost pleasurable feeling of gaffes too awful, too far-reaching, to bear think- ing about, and for that reason raising a kind of embarrassed grin : small ones like being late on the one morning when the Minister is waiting, large ones like finding the troops have been going round in circles and have turned up exactly where they left. And Carlton-Browne's reaction, vary- ing a little each time with the extent of the disaster, cannot fail to strike in most people that sympathetic chord that makes.thern feel with, not just laugh at, the victim of congenital incom- petence.

The Third Sex (director : Veit Harlan; 'X' cer- tificate in London) is a simple primer on homo- sexuality. `The theme,' says the handout, 'is not well wrapped up as it is in Tea and Sympathy, but dealt with in an honest and outspoken manner.' Outspoken, yes; but in a naive and pitiless and unimaginative manner, too, with smug con- clusions that would lead an ingenuous audience to suppose it had said the last word on homo- sexual feelings and behaviour, to think: 'So that's it!' as if it covered the lot. But clearly there are variations within the term homosexual, as there are within the term heterosexual (because every- one knows something about heterosexual feeling, no one supposes that particular stories cover the whole range of it; no one thinks 'So that's it!' on reading, say, The Postman Always Rings Twice or Lolita or Villette), whereas The Third Sex takes all that is sensational and crude and obvious and repulsive and, with the air of pulling a particu- larly unsavoury rabbit out of a particularly enticing hat, says, `Look, here it all is!' It is the story of a schoolboy who gets into homosexual company and the way his mother leads him home again by leaving him in the house for a week alone with the pretty maid. The subject is dealt with entirely from the parents' point of view; the boy's one hardly sees at all, or so superficially that one has no views about it. Father is a brutal banker who locks the boy in his room and seems to be grabbing for his whip whenever crossed; mother a fluttery, 'artistic' soul (Paula Wessely) who looks things up in an encyclopxdia and then goes into action with a firm little tremble of the chin : as likely a pair as you could imagine to make a boy go off the Mils out of sheer cussedness.

The Thirty-Nine Steps (director : Ralph Thomas: 'U' certificate) is a slicked-up version of the tale and only very vaguely connected with what I remember of Buchan's book or his hero. Kenneth More makes Richard Hannay a juvenile and pleasantly ridiculous character who addresses his -best girl as 'Fish-face' and even gets away with it; the best girl being Taina Elg as an unlikely schoolmistress with the (given her nationality) unlikely name of Fisher. Reginald Beckwith and Brenda de Banzie come up with some good moments in what looks (if you rid your mind of all thoughts of Buchan) a pretty negligible plot.