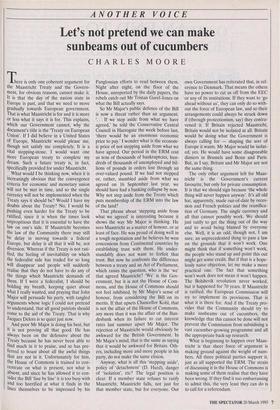 Let's not pretend we can make sunbeams out of cucumbers

What would I be thinking now, when it is increasingly obvious that the convergence criteria for economic and monetary union will not be met in time, and so the single currency will not be implemented when the Treaty says it should be? Would I have my doubts about the Treaty? No, I would be pushing even harder for the Treaty to be ratified, since it is when the times look unpropitious that it is essential to have the law on one's side. If Maastricht becomes the law of the Community there may still be delay in moving towards a federal Europe, but delay is all that it will be, not diversion. Whereas if the Treaty is not rati- fied, the feeling of inevitability on which the federalist side has traded for so long will disappear and people will suddenly realise that they do not have to do any of the things which Maastricht demands of them. If I were a federalist, I should be holding my breath, keeping quiet about what I really wanted, and praying that John Major will persuade his party, with tangled arguments whose logic I could not pretend to understand, that all good patriots should come to the aid of the Treaty. That is why Jacques Delors is so quiet just now.

And poor Mr Major is doing his best, but it is not proving all that good. He has always been on the defensive about the Treaty because he has never been able to find much in it to praise, and so has pre- ferred to boast about all the awful things that are not in it. Unfortunately for him, the House of Commons is trained to con- centrate on what is present, not what is absent, and since he has allowed it to con- sider the Bill 'line by line' it is too busy with and too horrified at what it finds in the lines themselves to be impressed by his Panglossian efforts to read between them. Night after night, on the floor of the House, unreported by the daily papers, the rebels catch out Mr Tristan Garel-Jones on what the Bill actually says.

So Mr Major's public defence of the Bill is now a threat rather than an argument. `. . If we step aside from what we have agreed,' he told the Conservative Central Council in Harrogate the week before last, `there would be an enormous economic price to pay.' I wonder what is the econom- ic price of not stepping aside from what we have agreed. Our period in the ERM cost us tens of thousands of bankruptcies, hun- dreds of thousands of unemployed and bil- lions of pounds in orders lost through an over-valued pound. If we had not stepped or, rather, stumbled aside from what we agreed on 16 September last year, we should have had a banking collapse by now. Why not step aside from the Treaty which puts membership of the ERM into the law of the land?

That phrase about 'stepping aside from what we agreed' is interesting because it shows the way Mr Major is thinking. He sees Maastricht as a matter of honour, or at least of face. He was proud of doing well in a tough negotiation and he believes he won concessions from Continental countries by establishing trust with them. He under- standably does not want to forfeit that trust. But now he confronts the difference between a treaty and an Act of Parliament, which raises the question, who is the 'we' that agreed Maastricht? 'We' is the Gov- ernment, but it is not the House of Com- mons, and the House of Commons should not feel inhibited, by Mr Major's sense of honour, from considering the Bill on its merits. If that upsets Chancellor Kohl, that is not the affair of the House of Commons, any more than it was the affair of the Bun- desbank when its failure to cut interest rates last summer upset Mr Major. The rejection of Maastricht would obviously be awkward for the British Government. In Mr Major's mind, that is the same as saying that it would be awkward for Britain. Oth- ers, including more and more people in his party, do not make the same elision.

Anyway, what is all this 'stepping aside', policy of 'detachment' (D. Hurd), danger of 'isolation', etc? The legal position is clear. If a member state refuses to ratify Maastricht, Maastricht falls, not just for that member state, but for everyone. Our own Government has reiterated that, in ref- erence to Denmark. That means the others have no power to cut us off from the EEC or any of its institutions. If they want to 'go ahead without us', they can only do so with- out the force of European law, and so their arrangements could always be struck down if (through protectionism, say) they contra- vened it. If Britain rejected Maastricht, Britain would not be isolated at all. Britain would be doing what the Government is always calling for — shaping the sort of Europe it wants. Mr Major would be isolat- ed, yes. He would have some disagreeable dinners in Brussels and Bonn and Paris. But, as I say, Britain and Mr Major are not the same thing.

The only other argument left for Maas- tricht is the Government's current favourite, but only for private consumption. It is that we should sign because 'the whole thing will never happen anyway'. It's all old hat, apparently, made out-of-date by reces- sion and French politics and the reunifica- tion of Germany. The single currency and all that cannot possibly work. We should just ratify to get the thing out of the way and to avoid being blamed by everyone else. Well, it is an odd, though not, I am sure, an unprecedented thing to pass a law on the grounds that it won't work. One might think that if something won't work, the people who stand up and point this out might get some credit. But if that is a hope- lessly naive objection, let me make a more practical one. The fact that something won't work does not mean it won't happen. The Bolshevik revolution never worked, but it happened for 70 years. If Maastricht is ratified, the European Commission will try to implement its provisions. That is what it is there for. And if the Treaty pro- vides that the Community should try to make sunbeams out of cucumbers, the knowledge that this cannot be done will not prevent the Commission from subsidising a vast cucumber-growing programme and all the appropriate back-up research.

What is beginning to happen over Maas- tricht is that sheer force of argument is making ground against the weight of num- bers. All three political parties support it, just as all supported the ERM. The strain of discussing it in the House of Commons is making some of them realise that they have been wrong. If they find it too embarrassing to admit this, the very least they can do is to call for a referendum.