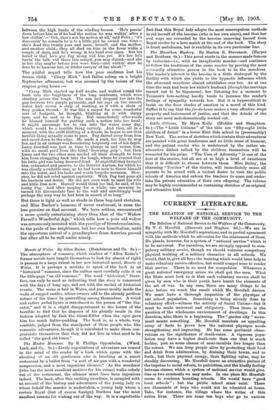 Hearts of Wales. By Allen Raine. (Hutchinson and Co. 6s.)—

The atmosphere of romance which readers of "Allen Raine's " former novels have taught themselves to look for almost of right is present to a large extent in her now historical novel, Hearts of Wales. It is perhaps a mistake to speak of the book as an " historical " romance, since the author most carefully calls it on the title-page "an old romance." The word "historical," there- fore, can only be used as indicating that the story is concerned with the days of long ago, and not with the recital of historical events. The scene is laid in Wales, and passes mostly inside the walls of rugged castles, whose owners add to the already perilous nature of the times by quarrelling among themselves. A weird and rather awful figure is introduced in the person of "the Sin- eater," and it is a slight disappointment to the lovers of the horrible to find that he disposes of his ghastly meals in the fashion adopted by Jack the Giant-Killer when the ogre gave him too much batter-pudding. The book is, as a whole, very readable, judged from the standpoint of those people who like romantic adventures, though it is calculated to make them con- gratulate themselves that they did not live in what used to be called " the good old times."