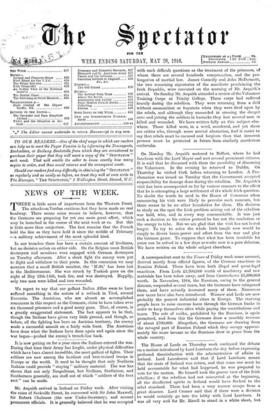 Mr. Asquith arrived in Ireland on Friday week. After visiting

the ruins of Saekville Street, he conversed with Sir John Maxwell, Sir Robert Chalmers (the new Under-Secretary), and several permanent officials. It is generally believed that he was occupied

with such difficult questions as the treatment of the prisoners, of whom there are several hundreds, compensation, and the pro- longat;on of martial law. James Connolly and John McDermott, the two remaining signatories of the manifesto proclaiming the Irish Republic, were executed on the morning of Mr. Asquith's arrival. On Sunday Mr. Asquith attended a review of tho Volunteer Training Corps at Trinity College. These corps had suffered heavily during the rebellion. They were returning from a drill without ammunition or bayonets when they were fired upon by the rebels, and although they succeeded in crossing the danger zone and joining the soldiers in barracks they lost several men 'n killed and wounded. We have written fully on this subject else- where. Those killed were, in a word, murdered, and yet there are critics who, through some mental aberration, find it easier to say that rebels must be excused and forgiven than that innocent persons must be protected in future from similarly murderous outbreaks.