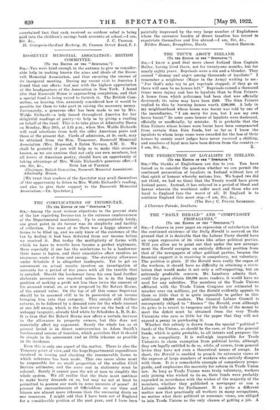 THE TRUTH ABOUT IRELAND.

[To THE EDITOR OF THE " SPECTATOR,"] Sts,—I know a good deal more about Ireland than Captain Buller, having lived there, not for twenty-one months, but for nearly eighty years. Reprisals were a sin and a blunder. They caused " dismay and anger among thousands of loyalists." I remember a neighbour (Major in the Army) writing to me: ."For God's sake try to get reprisals stopped; if they go on there will soon be no houses left." Reprisals caused a thousand _times more injury and loss to loyalists than to Sinn Feiners. A house- from which polieemen had been shot was officially destroyed; its value may have been t500. The Sinn Feiners replied to this by burning houses worth £200,000. A lady in my neighbourhood whose house was burnt was told by one of the incendiaries, " I am sorry for you, but I saw my own house burnt." In some cases houses of loyalists were destroyed, officially or unofficially, by mistake. It is probable that the Sinn Feiners whose houses were burnt haie been compensated from certain Sinn Fein funds, but so far as I know the loyalists to whom large sums were awarded for the loss of their houses by county court judges have never received a shilling, and numbers of loyal men have been driven from the country.—