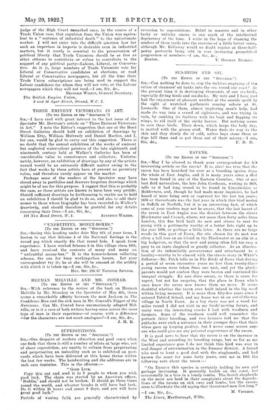 SIR,—May I be allowed to thank your correspondent for his interesting article on the raven? It is, alas! too true that the raven has been banished for ever as a breeding species front the whole of East Anglia, and it is many years since a nest has been found in any of the Eastern Counties. One of our best field naturalists, the late John Cordeaux, writing in 1870, tells us it had long ceased to be found in Lincolnshire ur Holderness, and, though he had made many inquiries, lie had heard of none being seen or captured for the last ten years; 1870 or thereabouts was the last year in which this bird nested in Suffolk or Norfolk, but it is an interesting fact, of which some of your readers may not be aware, that the last haunt of the raven in East Anglia was the district between the rivers Blackwater and Crouch, where, not more than forty miles from London, this fine bird built its nest and strove to rear its young with a pertinacity worthy of a better fate right up to the year 1890, or perhaps a little later. As there are no large woods in this part of Essex, the site chosen for its nest was often a tall tree on an island in the Blackwater or an elm in a big hedgerow, so that the nest and young often fell too easy a prey to an irate shepherd or greedy collector. As an illustra- tion of its indomitable perseverance and attachment to a locality—worthy to be classed with the classic story in White's Selborne—Mr. Fitch tells us in The Birds of Essex that during a period of seven successive years no less than twenty-three young ravens were taken from one nest, and yet the plucky parents would not confess they were beaten and continued the unequal struggle. Ex uno discs °mites, so there is cause for regret, but not for surprise, that the place in Essex which once knew the raven now knows them no more. It seems doubtful whether the raven ever built inland in the big wood within living memory. It is more than fifty-five years since I entered Felsted School, and my home was in an out-of-the-way village in North Essex. As a boy there was not a wood for miles round I did not visit in my birds'-nesting forays, and many were the interesting cracks I had with woodmen and farmers. Some of the woodmen could well remember the puttock (kite) breeding, and two farmers told me that the puttocks were such a nuisance in their younger days that their wives gave up keeping poultry, but I never came across any- one who could give me any personal experiences of the raven.

It is good news to hear that the raven is on the increase in the West and extending its breeding range, but so far as my limited experience goes I do not think this bird was ever in real danger of extermination in the Exmoor district. A friend who used to hunt a good deal with the staghounds, and hail known the moor for some forty years, sent me in 1911 the following note about the raven :- " On Exmoor this species is certainly holding its own and perhaps increasing. It generally builds on the coast, but occasionally in a tree in a lonely combo. The Scotch shepherds on the moor are loud in their complaints about the depreda- tions of the ravens on sick ewes and lambs, but the ravens seem to illustrate the old saying that threatened men live long."