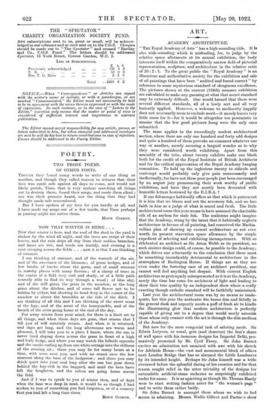 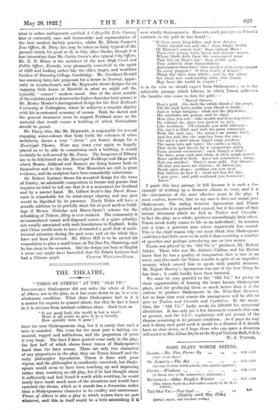 " TEE Royal Academy of Arts " has a high-sounding title. It is also wide-sounding which is misleading, for, to judge by the relative space allotments at its annual exhibition, the body interests itself within the comparatively narrow field of pictorial representation, sculpture, and architecture in the relative ratio. of 20 : 2 : 1. To the great public the " Royal Academy " is an illustrious and authoritative society for the exhibition and sale of oil paintings that have been " audited and found correct " by reference to some mysterious standard of oleaginous excellence. The pictures shown at the current (154th) summer exhibition are calculated to make any guessing at what that secret standard may be extremely difficult. One would hazard that there were several different standards, all of a lowly sort and all very leniently applied. However, a welcome to mediocrity happily does not necessarily seem to exclude merit—it merely leaves very little room for it—for it would be altogether too pessimistic to assume that the few good pictures hung were the only ones submitted.

The same applies to the exceedingly modest architectural section, where there are only one hundred and forty odd designs and quite a hundred of them provoke no comment whatever one way or another, merely arousing a languid wonder as to why they were considered worth exhibiting. Apart from this assembly of the trite, about twenty exhibits make one blush both for the credit of the Royal Institute of British Architects and for the critical appreciation of the Royal Academy hanging committee. To hold up the inglorious twenty to ridicule and contempt would probably only give pain unnecessarily and ineffectually, for have not these poor people just been encouraged by an august jury pronouncing their work worthy of public exhibition, and have they not mostly been decorated with honorific letters bestowed by the R.I.B.A.

If our fishmonger habitually offers us that which is putrescent it is him that we blame and not the accessory fish, and we lose faith in him as a judge of what is sound and fresh. The little architectural room this year seems to have assumed the charitable role of an asylum for stale fish. The malicious might imagine that the Academy, stung by the taunt that it habitually neglects architecture in favour of oil painting, had conceived the Machia. vellian plan of showing up current architecture as not even worth its present starvation space allowance by the simple expedient of selecting and exhibiting incompetences. With so celebrated an architect as Sir Aston Webb as its president, no such sinister design could, of course, be possible to the Academy, which drives one reluctantly to the conclusion that there must be something ineradicably detrimental to architecture in the atmosphere of Burlington House. If things are as they are even under the fostering care of an architect president, one cannot well feel anything but despair. With current English architecture so grotesquely misrepresented as it is at the Academy, surely the time has come for architects of light and leading to show their true quality by an independent show where a really exacting though catholic standard will be faithfully maintained.

Last year the architectural room was by no means so inade- quate, but this year the authentic fire burns dim and fitfully in the general dusk and urgently needs a puff of fresh air to kindle the illuminating glow that modern architecture is perfectly capable of giving out to a degree that would surely astonish those whose only contact with the art is through the dim medium of the Academy.

But now for the more congenial task of :Saluting merit. Sir Edwin Lutyens, as usual, gets (and deserves) the lion's share of wall space with his immense designs for Imperial. Delhi, per- suasively presented by Mr. Cyril Filmy. Sir John Burnet excites an admiration not unmixed with awe with his sketch for Adelaide House—the vast and monumental block of offices next London Bridge that has so alarmed the Little Londoners by its intended height. Perhaps Sir John himself was a trifle overawed before the-splendid daring of his creation and for that reason sought relief in the utter triviality of the designs for naturalistic artificial-stone rockeries so surprisingly exhibited under his name. It is as upsetting as though Mr. Thomas Hardy were to start writing fashion notes for " the woman's page " and to write them rather badly.

Sir John Burnet is amongst those whom we wish to feel secure in admiring. Messrs. Wallis Gilbert and Partne-s show

what is rather ambiguously entitled A Collapsible Tube Factory that is eminently sane and businesslike and representative of the best modern factory practice, whilst Mr. Edwin Cooper's New Offices, St. Mary Axe, may be taken as fairly typical of the present trend, for good or ill, in City office blocks, though it is less interesting than Mr. Curtis Green's also typical City Offices. Mr. E. B. Hoare is the architect of the new High Court and Public Offices, Karachi, very pleasantly conceived in the spirit of 1820 and looking rather like the elder, larger, and wealthier brother of Downing College, Cambridge. Mr. Goodhart-Rendel has amusing fairy-tale proposals for a house in Norway, appar- ently in weatherboard, and Mr. Hepworth shows designs for an engaging little house at Hatfield in what we might call the typically " correct " modern mood. One of the most notable of the exhibits (and it deserves far higher than that faint praise) is Mr. Morley Horder's distinguished design for the East Midlands University at Nottingham, where he achieves a singular dignity with his accustomed economy of means. Both the sketch and the general treatment seem to suggest Portland stone as the material that would ensure a building of which Nottingham should be proud.

Mr. Farey, who, like Mr. Hepworth, is responsible for several engaging water-colours that body forth the schemes of other architects, shows a very " clever " yet festive design for a Municipal Theatre. Were any town ever again so happily placed as to be able to commission such a building, it would certainly be well served by Mr. Farey. The burgesses of Tilbury are to be felicitated on the Municipal Buildings and Shops with which Messrs. Adshead and Ramsey are doing honour both to themselves and to the town. War Memorials are still in great evidence, and the sculptors have been remarkably industrious.

Sir Robert Lorimer shows his accepted design for the town of Paisley, an admirable composition in bronze and granite that requires no label to tell one that it is a monument for Scotland and by a master hand. Mr. Gilbert Scott's fine Naval Monu- ment is remarkable for its wind-swept chastity and any port would be dignified by its presence. North Wales will have a notable addition to its pitifully short list of good modern build- ings if Messrs. Nicholas and Dixon-Spain's scheme for the rebuilding of Talacre Abbey is ever realized. The community is accommodated round well-disposed courts of a quiet urbanity not usually associated with such foundations in England. India and China would seem to have demanded a good deal of archi- tectural attention during the past year, and on the whole they have not been ill-served. Mr. Oliver Hill is to be envied his commission to plan a small house at Tsi-Nan-Fu, Shantung, and he has risen to the occasion. Did the design not bear so English a name one might have hazarded that Sir Edwin Lutyens had