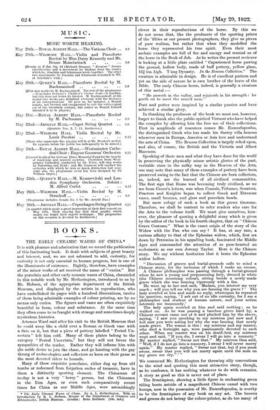 [Five new works by M. Rachmaninoff. The rest of the programme —It includes Debussy's Children's Corner Suite—is familiar, but this does not lessen its interest. M. Rachmaninoff, at his recital two weeks ago, delighted everyone with the freshness of his interpretations. He gave us, for instance, a Mozart sonata, not twisted and exaggerated to suit the extravagant ear of the twentieth century, but rather as Mozart himself intended it to be played.]

May 22nd.—WnamoRE HALL. Violin Recital by Mr. Louis Pecskai • • • • .. 8.15 [Those who appreciate fine playing will be at Mr. Pecskars recital. He appears before the public too infrequently to be missed.] May 24th.—ROYAL ALBERT HALL.—Westminster Cathe- dral Choir : Eugene Goossens' Orchestra 8.15

[Concert in aid of the Gervase Elwes Memorial Fund for the benefit of musicians and musical societies. Choristers from -West- minster Cathedral, conducted by Dr. Terry, will sing works by Palestrina and Byrd ; and Mr. Goossens will conduct the orchestra with which he won so much distinction last year. Inter alia, the programme cover has been designed by Sir William Orpen.]

May 26th.—AEoLIAN HALL.—Copenhagen String Quartet 8.15 [A quartet which made a great impression at their first concert on May 12th. Their playing has that ideal quality which makes one forget their superb technique. The programme on this occasion is devoted to Beethoven.] May 20th.—ROYAL ALBERT HALL.—The Vatican Choir . .