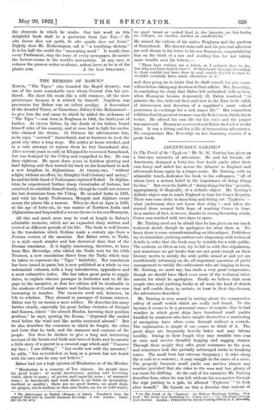 TILE MEMOIRS OF BABUR.* 13Anun, " The Tiger," who founded

the Mogul dynasty, was one of the most remarkable men whom Central Asia has pro- duced. His short life reads like a wild romance, all the more picturesque because it is related by himself. Napoleon was

precocious but Babur was an infant prodigy. A descendant of the dreaded Timur, or Tamerlane, Zahiru'd-din Muhammad—

to give him the real name to which he added the nickname of " The Tiger "—was born in Ferghana in 1483, the birth-year of Luther. At eleven Babur, by the death of his father, found himself ruler of his country, and at once had to fight his uncles, who claimed the throne. At thirteen the adventurous boy, as he says, " coveted " Samarkand, and at fourteen he took the great city after a long siege. His nobles at home rebelled, and in a vain attempt to repress them he lost Samarkand also.

After several years in exile at Khujand he recovered Samarkand, but was besieged by the Uzbeg and compelled to flee. He was then eighteen. He spent three years in fruitless plotting and hard fighting and then turned his back on his homeland to seek a new kingdom in Afghanistan. At twenty-one, " without a fight, without an effort, by Almighty God's bounty and mercy," he and his little band of Turkomans captured Kabul. In Afghan- istan he experienced further sharp vicissitudes of fortune, but contrived to establish himself firmly, though he could not recover his lost dominions from the Uzbeg. He invaded India in 1521, and with his hardy Turkomans, Mongols and Afghans swept across the plains like a torrent. When he died at Agra in 1530, at the age of forty-six, he was master of Northern India and Afghanistan and bequeathed a secure throne to his son Humayun.

admirable memoirs, which are an expanded diary written and revised at different periods of his life. The book is well known

in the translation which Erskine made a century ago from a Persian version of the memoirs. But Babur-wrote in Turki, in a style much simpler and less rhetorical than that of the Persian translator. It is highly interesting, therefore, to have

from Mrs. Beveridge, who edited the Turki text for the Gibb Trustees, a new translation direct from the Turki which may be taken to represent the " Tiger " faithfully. Her translation has been issued in parts, but is now published as a whole in two substantial volumes, with a long introduction, appendices and a most exhaustive index. She has taken great pains to supply dates, to explain obscure passages in footnotes and to fill the gaps in the narrative, so that her edition will be invaluable to the students of Central Asiatic and Indian history, who are now increasing in number. The memoirs need not, however, be left to scholars. They abound in passages of human interest.

Babur was by no means a mere soldier. He describes his many battles clearly, especially his great Indian victories of Panipat and Kanwa, where " the absurd Hindus, knowing their position perilous," he says, quoting the Koran, " dispersed like carded wool before the wind and like moths scattered abroad." But he also describes the countries in which he fought, the cities and forts that he took, and the manners and customs of the people. Nor does he disdain to give a long and interesting account of the beasts and birds and trees of India and to narrate a little story of a parrot in a covered cage which said " Uncover my face ; I am stiffing." " Let credit rest with the narrator," he adds, " but nevertheless so long as a person has not heard with his own ears he may not believe."

Babur had not a high opinion of Hindustan or of the Hindus.

" Hindustan is a country of few charms. Its people have no good looks : of social intercourse, paying and receiving visits, there is none ; of genius and capacity none ; of manners none ; in handicraft and work there is no form or symmetry, method or quality ; there are no good horses, no good dogs, no grapes, mush-melons or first-rate fruits, no ice or cold water, * The Babur-Hama in English (Memoirs of Babas). Translated from the original Turki text by Annette Susannah Beveridge. 2 vols. London Lezac. 122 12$. 6d. net.]

no good bread or •rooked food in the bazaars, no hot-baths, no colleges, no candles, torches or candlesticks."

He missed the culture of his native Ferghana and the gardens of Samarkand. His shrewd statecraft and his paternal affection are well shown in his letter to his son Humayun, congratulating him on the birth of a son and scolding him for not taking more trouble over his letters :- " Thou hest written me a letter, as I ordered thee to do, but why not have read it over ? If thou hadst thought of reading it, thou couldst not have done it, and, unable thyself to read it, wouldst certainly have made alteration in it," and then going on to insist that he shall consult his wise coun-

sellors before taking any decision in State affairs. Mrs. Beveridge, in concluding the story that Babur left unfinished, tells us how, when Humayun became desperately ill, Babur resolved " to practise the rite, believed then and now in the East to be valid, of intercession and devotion of a suppliant's most valued possession in exchange for a sick man's life." His counsellors told him that his greatest treasure was the Koh-i-noor, but he knew better. He offered his own life for his son's and the prayer

was answered. Humayun recovered and Babur died a few weeks later. It was a fitting end for a life of tremendous adventures. We congratulate Mrs. Beveridge on her charming version of a great book.