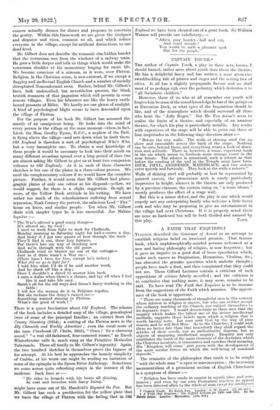 THE author of Captain Youth, a play in three acts, knows, I should hazard, rather more about youth than about the theatre, He has a delightful fancy and has written a most attractive

swashbuckling tale of pirates and sieges and the setting free of cities. It all has a slightly propaganda flavour and we shall most of us perhaps sigh over the pedantry which dedicates it to " all Socialistic children."

However, those of us who at all remember our youth will forgive him because of the sound knowledge he has of the goings-on at Execution Dock, or what spies of the Inquisition should be like, and of the atmosphere which should surround all those who hoist the " Jolly Roger." But Mr. Fox doesn't seem to realize the limits of a theatre, and especially of an amateur theatre, for which his play is particularly suitable. Any reader with experience of the stage will be able to point out three or four ineptitudes in the following stage direction alone :-

" Before the city walls. The walls of shining steel rise up sheer and unscalable across the back of the stage. Nothing can be seen behind them, and everything wears a look of deser- tion and solitude. There is, however, a tense, expectant hush in the air which seems to forebode some strange event in the near future. The silence is unnatural, such a silence as that before the rending of the veil in the Temple must have been. DICK, PHYL, ANDRESEN, MAINBRACE, and two sailors enter quietly and furtively. They look at the walls a minute."

Walls of shining steel will probably at best be represented by painted canvas, the proscenium arch is rarely particularly

impressive in height, silences in the theatre are only produced by a previous clamour, the curtain rising on " a tense silence " merely produces the effect of a stage wait.

But this is a minor defect, and the play is one which would exactly suit any enterprising family who welcome a little burnt

cork and who may be proposing to give an entertainment in the village hall next Christmas. If it is properly acted there are none so hardened but will be both thrilled and amused by