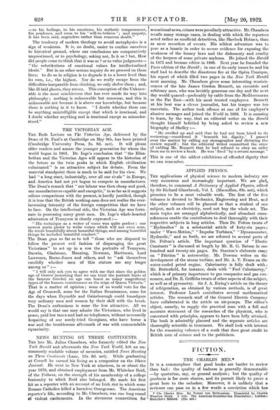 THE applications of physical science to modern industry are very numerous and increasingly important. We are glad, therefore, to commend A Dictionary of Applied Physics, edited by Sir Richard Glazebrook, Vol. L (Macmillan, 63s. net), which promises to be a most valuable work. The first of the five volumes is devoted to Mechanics, Engineering and Heat, and the other volumes will be planned so that a student of one subject, such as electricity, need not buy the whole set. The main topics are arranged alphabetically, and abundant cross- references enable the contributors to deal thoroughly with their respective subjects in long articles. Thus Dr. Fulton treats of " Hydraulics " in a substantial article of forty-six pages ; under " Wave-Motion," " Impulse Turbines," " Dynamometer, Hydraulic," and so forth, we are referred to several parts of Dr. Fulton's article. The important question of " Elastic Constants " is discussed at length by Mr. R. G. Batson in one hundred and twenty-six pages. Dr. Stanton's elaborate essay on " Friction " is noteworthy. Mr. Dowson writes on the development of the steam turbine, and Mr. A. T. Evans on the water-cooled petrol engine. Calorimetry is fully dealt with ; Mr. Butterfield, for instance, deals with " Fuel Calorimetry," which is of primary importance to gas companies and gas con- sumers, and Dr. E. Griffiths treats of other aspects of the subject, as well as of pyrometry. Sir J. A. Ewing's article on the theory of refrigeration, as obtained by various methods, is of great interest. Professor Lamb contributes several mathematical articles. The research staff of the General Electric Company have collaborated in the article on air-pumps. The editor's object, namely, to supply the practical man with a full and accurate statement of the researches of the physicist, who is concerned with principles, appears to have been fully attained. The book is admirably planned and the separate articles are thoroughly scientific in treatment. We shall look with interest for the remaining volumes of a work that does great ciedit to British men of science and to the publishers.