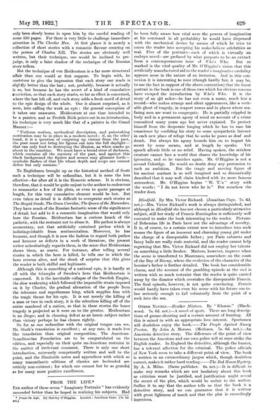 Victor Rickard's work is always distinguished, and although in Blindfold she has not chosen a particularly attractive subject, still her study of Francis Huntingdon is sufficiently well executed to make the book interesting to the reader. Pictures of Bohemian life in Paris have not the advantage of novelty. It is, of course, to a certain extent new to introduce into such scenes the figure of an innocent and charming young girl under the charge of a disreputable father ; yet Paris cabarets and fancy balls are really stale material, and the reader cannot help regretting that Mrs. Victor Rickard did not employ her talents on something a little fresher. Matters, however, improve when the scene is transferred to Maurennes, somewhere on the coast of the Bay of Biscay, where the evolution of the character of the heroine's father is further detailed. The book has considerable charm, and the account of the gambling episode at the end is written with so much restraint that the reader is quite carried away by the disaster which overtakes the disreputable Francis. The final episode, however, is not quite convincing. Francis would hardly have taken even his scene with his future son-in- law seriously enough to fall voluntarily from the point of a rock into the sea.