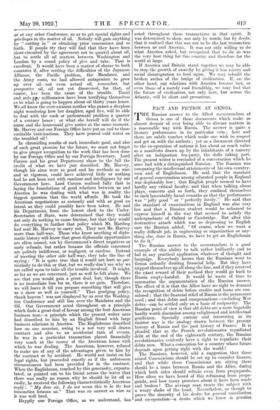 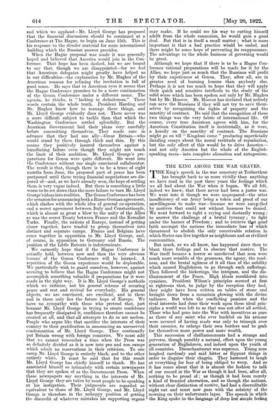 FACT AND FICTION AT GENOA. T HE Russian answer to the

Allied memorandum at Genoa is one of those documents which make us almost despair of ever being able to discuss matters in a reasonable way with Russia. The answer is quite a literary performance in its particular vein ; here and there are subtle touches which make one wish to respect and get on with the authors ; yet as a document directed to the co-operation of nations it has about as much value as a manifesto drawn up by the inhabitants of a nursery after an indignation tea-party, the dolls taking part. The present writer is reminded of a conversation which he once had with a distinguished Russian. The Russian was comparing the intellectual attainments of his own country- men and of Englishmen. He said that the standard of general conversation among educated people in England was deplorably low ; that English people seemed to have hardly any critical faculty, and that when talking about plays, concerts and so forth, they confined themselves to such lamentably banal remarks as that the performance was " jolly good " or " perfectly lovely." He said that the standard of examinations in England was also very low and that a Russian student would be ashamed to express himself in the way that seemed to satisfy the undergraduate of Oxford or Cambridge. But after this destructive attack which was so depressing to English ears the Russian added, " Of course, when we want a really difficult job, in engineering or organization or any- thing else, done in Russia, we have to get an Englishman to do it."

The Russian answer to the memorandum is a good example of this ability to talk rather brilliantly and to fail in any practical application whatever of thought and languitge. Everybody knows that the Russians went to Genoa ardently desiring financial help. But they have tripped themselves up all along the line, and if they received the exact reward of their method they would go back to Russia empty-handed. It would be waste of time to summarize the argumentation of the Russian answer. The effect of it is that the Allies have no right to demand the recognition of debts before credits and loans are con- sidered ; that the financial relief of Russia is the paramount need ; and that debts and compensations—excluding War debts—can be settled only on a basis of reciprocity. The Russian point of view is that old debts are a mere bagatelle hardly worth discussion among enlightened and intellectual gentlemen. Specially curious and interesting in its sinister way is the analogy drawn between the present history of Russia and the past history of France. It is pleaded that as the French revolutionaries repudiated debt at the end of the eighteenth century, the Russian revolutionaries evidently have a right to repudiate' their debts now. What a conception for a country whose future depends upon getting right with the world. ! The Russians, however, add a suggestion that three mixed Commissions should be set up to consider finance, and that while these Commissions are sitting there should be a truce between Russia and the Allies, during which both sides should refrain even from propaganda. How often we have heard of this refraining from propa- ganda, and how many promises about it have been made and broken ! The average man treats the subject with a weary shake of the head. Nevertheless, as though to prove the sincerity of his desire for general conciliation and co-operation--a desire which we know is genuine and which we applaud—Mr. Lloyd George has proposed that the financial discussions should be continued at a Conference at The Hague, to begin on June 15th. This is his response to the slender material for more international building which the Russian answer provides. When the Hague proposal was made it was generally hoped and believed that America would join in the Con- ference. That hope has been dashed, but we are bound to say that, though we are disappointed—for we feel that American delegates might greatly have helped us in our difficulties—the explanation by Mr. Hughes of the American reasons for refusing the invitation is full of good sense. He says that to American eyes it seems that the Hague Conference promises to be a mere continuation of the Genoa Conference under a different name. The agenda, he thinks, is "-lacking in definiteness." These words contain the whole truth. President Harding and Mr. Hughes know how to manage these things, and Mr. Lloyd George evidently does not. There never was a more difficult subject to tackle than that which the -Washington Conference settled splendidly. But the American Government laid their plans very carefully before committing themselves. They made sure in advance that they had one ally—Great Britain—who would stand by them through thick and thin. By this means they positively insured themselves against a humiliating failure even though they might not touch the limit of their ambition. Mr. Lloyd George's pre- parations for Genoa were quite different. He went into the Conference without one single convinced collaborator. The result is that, though there is to be a truce of eight mouths from June, the proposed pact of peace has been postponed until these trying financial negotiations are dis- posed- of—,and, as we have already seen, the hope of.settling them is very vague indeed. But there is something a little worse to be set down than the mere failure to turn Mr. Lloyd George's ideas into realities. The Genoa Conference has been the occasion for announcing both a Russo-German agreement, which clashes with the whole idea of general co-operation, and a secret agreement between Italy and Constantinople, which is almost as great a blow to the unity of the Allies as was the secret Treaty between France and the Kemalist Turks. Finally, the nations of Europe, instead of getting closer together, have tended to group themselves into distinct and separate camps. France and Belgium have come together in opposition to Mr. Lloyd George, and, of course, in opposition to Germany and Russia. The position of the Little Entente is indeterminate.

We earnestly hope that if the Hague Conference is actually held, between now and then the very obvious lessons of the Genoa ' Conference will be learned. A repetition of the Genoa experience would be deplorable. We particularly wish to guard ourselves, however, against seeming to believe that the Hague Conference might not accomplish something valuable if preparations for it were made in the right way. It is Mr. Lloyd George's methods which we criticize, not his general scheme of securing peace and rest and revival for everybody. His • general objects, we are convinced, are excellent, and in them and in them only lies the future hope of Europe. We have no sympathy with those who pretend that, just because Mr. Lloyd George in trying to create confidence has frequently dissipated it, confidence therefore cannot be created at all, and that all attempts to do so are useless. People who argue like that sacrifice the interests of their country to their gratification in announcing an unreserved condemnation of Mr. Lloyd George. They continually put Britain wrong with foreign countries. We. must add that we cannot remember a time when the Press was so definitely divided as it is now into pro and con camps which admit no reservations in their criticism. To one camp Mr. Lloyd George is entirely black, and to the other entirely white. It must be said that for this result ,Mr. Lloyd George has chiefly himself to thank. He has associated himself so intimately with certain newspapers that they are spoken of as the Government Press. When these newspapers say anything in the interests of Mr. Lloyd George they are taken by most people to be speaking at his instigation. Their judgments are regarded as equivalent to those of Mr. Lloyd George, and Mr. Lloyd George is therefore in the unhappy position of getting the discredit of whatever mistakes his supporting organs may make. If he could see his way to cutting himself adrift from the whole connexion, he would gain a good deal. But that is in itself a small matter ; what is more important is that a bad practice would be ended, and there might be some hope of preventing its reappearance. The advantage to the whole business of governing would be great.

Although we hope that if there is to be a Hague Con- ference rational preparations will be made for it by the Allies, we hope just as much that the Russians will profit by their experiences at Genoa. They, after all, are in greater need of learning lessons than anybody else. Perhaps it is not too much to hope that they will apply their quick and sensitive intellects to the study of the solid sense which has been spoken not only by Mr. Hughes but by Mr. Hoover. Mr. Hoover has declared that nobody can save the Russians if they will not try to save them- selves by recognizing the rights of property and the sanctity of contract. He said that the recognition of these two things was the very fabric of international life. Of course, every true American agrees with him, for the American Constitution itself is incidentally, as it were, a homily on the sanctity of contract. The Russians might go on till " Kingdom come " producing superficially dazzling essays about the moral rectitude of repudiation, but the only effect of this would be to drive America— and not only America but the whole of the English- speaking races—into complete alienation and antagonism.