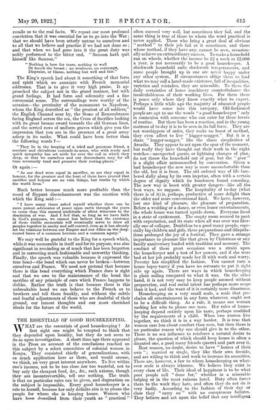 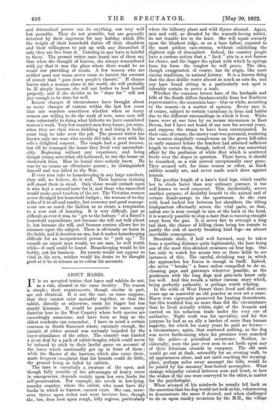 THE ESSENTIALS OF GOOD HOUSEKEEPING.

WHAT are the essentials of good housekeeping ? At first sight one might be tempted to think that they depended upon locality, but they do not seem to do so upon investigation. A short time ago there appeared in the Press an account of the conclusions reached on this subject by a select committee of colonial women in Kenya. They consisted chiefly of generalizations, with as much application here as there, and would arouse, we think, no very great interest anywhere. To live within one's income, not to be too close nor too wasteful, not to buy only the cheapest food, &c., &c., such axioms, though they are - incontrovertible, tell one nothing. The truth is that no particular rules can be given, and dogmatism on the subject is impossible. Every good housekeeper is a rule to herself, because her only definite aim is to please the people for whom she is keeping house. Women who have been described from- their-youth as-- ".praoticoUr often succeed very well, but sometimes they fail, and the same thing is true of those to whom the word practical is never applied. Those who bring a great deal of obvious " method " to their job fail at it sometimes, and those whose method, if they have any, cannot be seen, occasion- ally achieve an extraordinary success. To make a household run on wheels, whether the income be £2 a week or £2,000 a year, is not necessarily to be a good housekeeper. A clockwork household suits clockwork temperaments, and some people brought up in one are never happy under any other system. If circumstances oblige them to lead what we may call a hand-made existence, full of inequalities, varieties and mistakes, they are miserable. To them the daily certainties of home machinery counterbalance the incalculableness of their working lives. For them there is peace only where they know exactly what to expect. Perhaps a little while ago the majority of educated people would have come into this category. Old-fashioned people are apt to use the words " a good housekeeper " only in connexion with someone who can cater for these lovers of routine. But there has been a reaction, and in the young matrons of to-day it is to be seen in its full force. They are not worshippers of order, they make no boast of method, they even affect to live " hugger-mugger." But it is a sham " hugger-mugger," like the sham simplicities of Arcadia. They appear to act upon the spur of the moment, but really they have thought out their work in the night watches—unexpected guests, or lightning changes of plan, do not throw the household out of gear, but the " gear " is a slight affair untrammelled by convention. Given a bad housekeeper the new way is more uncomfortable than the old, but it is freer. The old ordered way of life lum- bered dully along by its own impetus, often with a certain degree of dignity which its bondsmen found consoling. The new way is beset with greater dangers—like all the best ways, we suppose. The hospitality of to-day (what there is of it) is, perhaps, productive of more delight than the older and more conventional kind. We have, however, lost one kind of pleasure, the pleasure of preparation. Before a wedding or a dance, or even lesser entertainments, the whole house was turned upside down. Everyone lived in a state of excitement. The empty room seemed to pant with expectation, and its state when all was over was liter- ally one of collapse. Doubtless to a good many people, espe- cially big children and girls, these preparations and dilapida- tions prolonged the joy of a festival. They gave a strange importance to pleasure like that given by Christmas or any family anniversary loaded with tradition and memory. The conduct of these great occasions was a strain upon the housekeeper and a test of her powers, and if she•were bad at her job probably made her ill with work and worry. Poverty has simplified the fashion. You cannot turn a house topsy-turvy if you have no servants to put it right side up main. There are ways in which housekeeping is plain sailing compared to what it was. On the other hand, it is not very easy to keep people amused without preparation, and real social talent has perhaps more scope than it had, and the want of it is certainly more disastrous.

Housekeeping on a very small scale, a scale that pre- cludes all entertainment in any form whatever, ought not to be a difficult thing. As a rule, it means one woman racking her wits to please one man. Her rules of house- keeping depend entirely upon his taste, perhaps modified by the requirements of a child. When two women live together, we think it is in a way harder. It is true that women care less about comfort than men, but then there is no •particular reason why one should give in to the other. There is no sex influence to reinforce a natural desire to please, the question of which should keep house is often a disputed one, a good many friends quarrel and part over it. Most women, no doubt, desire to have " homes of their own " ; married or single, they like their own fireside, and are willing to think and work to increase its amenities. There are, however, a few to whom housekeeping on what- ever scale is always irksome. We believe they exist in every class of life. Their ideal of happiness is to be what poor people call " done for," whether in a miserable lodging or in the most ruinous hotel. Duty often forces them to the work they hate, and often they do not do it very badly. According to the fashion of their day or class they " carry on " with no conspicuous failures. They believe and act upon the belief that any intelligent: and determined person can do anything, not very well but passably. They do not grumble, but are generally detected by their eagerness for any holiday which lifts the weight of their household duties off their shoulders and their willingness to put up with any discomfort if only they are free from it. Catering in any form is hateful to them. The present writer once heard one of them say that when she thought of heaven, she always remembered with joy that it was the place where there would be no meals nor providing of meals. A few women who are neither poor nor mean never cease to lament the amount of money that " goes down people's throats." If chance leaves such a woman alone in the world, she will probably be ill simply because she will not bother to feed herself properly, and if she decides to be " done for " will not pay enough to be done for well. Recent changes of circumstance have brought about so many changes of custom within the last few years that one wonders sometimes whether when so many women are willing to do the work of men, some men will turn voluntarily to doing what hitherto we have considered women's work. Very few married men keep house, yet some, when they see their wives disliking it and doing it badly, must long to take over the job. The present writer has known only one man who openly did take it over with his wife's delighted consent. The couple had a good income, but till he managed the house they lived very uncomfort- ably. Beginning without any experience, and being though young somewhat old-fashioned, he ran the house on clockwork lines. How he found time nobody knew. He was by no means an effeminate person ; he distinguished himself and was killed in the War.

If ever men take to housekeeping in any large numbers, they will, we believe, do it well. Their business training will stand them in stead. Only those would embark upon it who had a natural taste for it, and those who succeeded would make good teachers of the art. The Victorian woman never divulged her household budget ; the woman of to-day talks of it to all and sundry, but economy and good manage- ment are so much the fashion as to create a temptation to a new sort of boasting. It is very difficult, just as difficult as ever it was, to " get to the bottom " of a friend's household expenditure, not because she will not talk about it, but because she will, and because custom allows her to romance upon the subject. There is obviously no harm in the habit, and it deceives no one, but it makes housekeeping difficult for an inexperienced person to " pick up." To consult an expert man would, we are sure, be well worth while—if such could be found. Housekeeping would be his hobby, not his business. Its secrets would not appear so vital in his eyes, neither would his desire to be thought good at it be so intense as to colour his accounts.