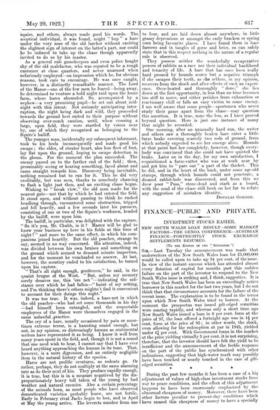 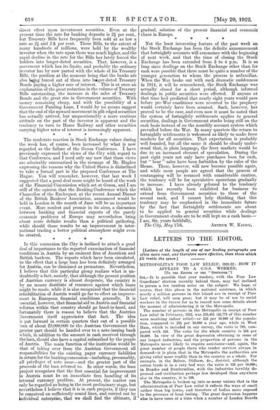 (To THE EDITOR OP THE " SPECTAT011."1 Sia,—Last Tuesday the announcement was made that underwriters of the New South Wales loan for £5,000,000 would be called upon to take up 94 per cent, of the issue. In view of the instant success which has attended almost every flotation of capital for months past this sudden failure on the part of the investor to respond to the New South Wales issue is striking and, I think, suggestive. It is true that New South Wales has been an exceedingly active borrower in this market for the last two years, but I do not think that that circumstance accounts for the failure of the recent issue. The explanation is to be found in the terms upon which New South Wales tried to borrow. At the moment the prospectus was issued gilt-edged securities were soaring rapidly, and whereas only a short time ago New South Wales issued a loan in 6 per cent. form at the price of 97, the loan offered a fortnight ago was in 4i per cent. form at the price of 95 ; in other words, the stock, even allowing for the redemption at par in 1945, yielded under 4/ per cent. With Government loans in the market at the price yielding virtually 5 per cent. it is.not surprising, therefore, that the investor should have felt the yield to be insufficient and the announcement of the feeble response on the part of the public has synchronized with other indications, suggesting that high-water mark may possibly have been touched or nearly touched in the case of gilt- edged securities. * During the past few months it has been a case of a big adjustment of values of high-class investment stocks from war to peace conditions, and the effect of this adjustment happens to have been enormously emphasized by the abnormal cheapness of money. Moreover, there have been other factors peculiar to present-day conditions which have caused this cheapness of money to have a specially direct effect upon investment securities. Even at the present time the rate for banking deposits is 2j per cent., but Treasury Bills have frequently been sold at as low a rate as 21 and 2 per cent. These Bills, to the extent of many hundreds of millions, were held by the wealthy investor when the rate upon them was much higher, and the rapid decline in the rate for the Bills has lately forced the holders into longer-dated securities. That, however, is a movement which has its limits, and probably the ordinary investor has by now parted with the whole of his Treasury Bills, the position at the moment being that the banks are also iiing forced out of them into longer-dated Treasury Bonds paying a higher rate of interest. This is at once an explanation of the great reduction in the volume of Treasury Bills outstanding, the increase in the sales of Treasury Bonds and the great rise in Government securities. With money remaining cheap, and with the possibility of a Government Funding Loan, I would by no means suggest that the end of the upward movement in gilt-edged securities has actually arrived, but unquestionably a more cautious attitude on the part of the investor is apparent and the tendency to turn to Home Railway and other securities carrying higher rates of interest is increasingly apparent.

The moderate reaction in Stock Exchange values during the week has, of course, been increased by what is now regarded as the failure of the Genoa Conference. I have previously expressed the views of the City with regard to that Conference, and I need only say now that those views are admirably summarized in the message of Mr. Hughes expressing the reasons why the United States is disinclined to take a formal part in the proposed Conference at The Hague. You will remember, however, that last week I suggested that a good deal more might be heard of the work of the Financial Commission which sat at Genoa, and I am still of the opinion that the Banking Conference which the Chancellor of the Exchequer, at the recent Annual Dinner of the British Bankers' Association, announced would be held in London in the month of June will be an important event. More modest and prosaic in its aims, a discussion between banking and financial experts of the purely economic problems of Europe may nevertheless bring about more definite results than a political gathering, while should those results be an improvement in inter- national trading a better political atmosphere might even be created.

In this connexion the City is inclined to attach a good deal of importance to the reported examination of financial conditions in Austria by an eminent firm of American and British bankers. The reports which have been circulated, to the effect that a large loan has been definitely arranged for Austria, can be dismissed as premature. Nevertheless, I believe that this particular group realizes what is un- doubtedly a fact, namely, that although the present position of, Austrian currency is almost desperate, the country is by no means destitute of resources against which loans might be made, while it is also recognized that the financial rehabilitation of Austria would go far to effect an improve- ment in European financial conditions generally. It is essential, however, that financial aid to Austria and financial reforms within that country should go hand-in-hand, and Fortunately there is reason to believe that the Austrian Government itself appreciates that fact. The idea is put forward in certain quarters that out of a possible loan of about £S,000,000 to the Austrian Government the greater part should be handed over to a note-issuing bank which, in addition to the amount in cash received through the loan, should also have a capital subscribed by the people of Austria. The main function of the institution would be that of taking over from the Austrian Government all responsibilities for the existing .paper currency liabilities ia_return for the banking concession—including, presumably, all privileges of note issue—and the greater part of the proceeds of the loan referred to. In other words, the loan project' recognizes that the first essential for improvement in Austria must be an immediate firm handling of its internal currency problem. At present, the matter can only be regarded as being in the most preliminary stage, but nevertheless I believe that it is in such projects, if they can be conceived on sufficiently sound lines, and carried out by individual enterprise, that we shall find the ultimate, if gradual, solution of the present financial and economic, chaos in Europe. * * * Not the least interesting feature of the past week on the Stock Exchange has been the definite announcement that fortnightly accounts will commence with the beginning of next week, and that the time of closing the Stock Exchange has been extended from 3 to 4 p.m. It is so long since dealings on the Stock Exchange other than for cash were possible that there must be quite a number of the younger generation to whom the process is unfamiliar. When the War broke out with such dramatic suddenness in 1914, it will be remembered, the Stock Exchange was actually closed for a short period, although informal dealings in public securities were effected. If anyone at that time had predicted that nearly eight years would pass before pre-War conditions were reverted to the prophecy would certainly have been scouted. Such, however, has proved to be the case, and even now it must be noted that the system of fortnightly settlements applies to general securities, dealings in Government stocks being still on the cash basis instead of on the monthly account system which prevailed before the War. In many quarters the return to fortnightly settlements is welcomed as likely to make freer markets for all securities. That expectation is probably well founded, but all the same it should be clearly under- stood that, in plain language, the freer markets would be due to an increased element of speculation. During the past eight years not only have purchases been for cash, but " bear " sales have been forbidden by the rules of the House. These, however, will now become possible again, and while most people are agreed that the process of contangoing will be resumed with considerable caution, the tendency will be for speculative operations gradually to increase. I have already referred to the tendency which has recently been exhibited for business to extend from Government securities to those of the second rank, and I cannot help thinking that this tendency may be emphasized in the immediate future by the fact that fortnightly settlements are about to be applied to general securities while dealings in Government stocks are to be still kept on a cash basis.--I am, Sir, yours faithfully,