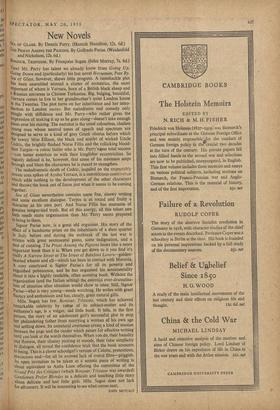 BONJOUR, TRISTESSE. By Frangoise Sagan. (John Murray, 7s. 6d.) THAT Mr. Parry has talent we already know from Going Up. Going Down and (particularly) his last novel Horseman, Pass By. Sea of Glass, however, shows little progress. A ramshackle plot has been assembled around a clutter of eccentrics, the most iMportant of whom is Varvara, born of a British black sheep and a Russian sorceress in Chinese Turkestan. Big, bulging, beautiful, Varvara comes to live in her grandmother's quiet London house in the Twenties. The plot turns on her inheritance and her intro- duction to London mores. But melodrama and comedy only mingle with diffidence and Mr. Parry—who rather gives the impression of making it up as he goes along—doesn't take enough Pains over his mixing. The narrator is the usual colourless, clueless Young man whose neutral tones of speech and spectrum are designed to serve as a kind of grey Greek chorus before which the tawny Miss Ellison, the black and scarlet of wicked Uncle Cedric, the brightly flushed Nurse Fillis and the rollicking blood- shot Turpin—a comic butler who is Mr. Parry's gone total success .--can better entertain us with their kingfisher eccentricities. So vaguely defined is he, however, that some of his mistiness seeps through and blurs the characters he is meant to strengthen.

The melodramatic death of Cedric, impaled on the respectably

ornate area spikes of Aynho Terrace, is a meretricious contrivalIce Which adds nothing to the development of the other characters and throws the book out of focus just when it seems to be coming together.

and some excellent dialogue. Turpin is as round and fruity a character as his own port. And Nurse Fillis has moments of genuine tongue-tied truth. But all this energy, all this talent one feels needs more organisation than Mr. Parry seems prepared to bring to them.

Signor Parise now, is a great old organiser. His story of the

effect of a handsome priest on the inhabitants of a slum quarter in Italy before and during the outbreak of the last war is Written with great sentimental gusto, some indignation, and a deal of cunning. The Priest Among the Pigeons looks like a more important book than it is. When you get down to it you find it's really A Narrow Street or The Street of Barefoot Lovers—golden- hearted whores and all—which has been in contact with Moravia. A cosy courtyard is Signor Parise's for all its poverty and anguished pubescence, and he has organised his sentimentality about it into a highly readable, often amusing book. Without the organisation (and the Italian setting) the essential over-dramatisa- tion of situation after situation would show at once. Still, Signor Parise—who is very young—needs watching. He writes with great fluency and enthusiasm and has, clearly, great natural gifts.