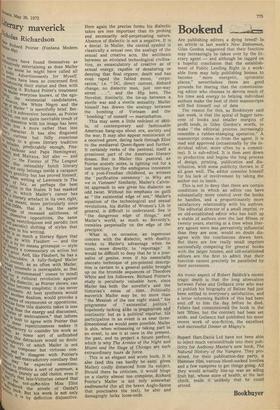 %te 'Icbard Poirier (Fontana Modern rs 4013) kkh,"riters have found themselves as vely entertaining as does Mailer li 1, °°/°rie sense he might have called all u(s Advertisements for Myself.

'the it. Richard Poirer's treatment

ailer everyone knows, of the egog, the the existential candidatures, ,,kegev„-;ces, the White Negro and the

is subversive. because, as Poirier Hiers ' -he not quite inevitable result of illak obsession with his image has been e hhim a more rather than less enaracter. It has also disguised curious but fully conscious ,11`11 irim„?, to a given literary tradition ki predictabily enough, FitzNirs'etraulkner and Papa Hemingway, Salh,t and Malraux, but also — and the Forster of The Longest ;14' • `Y: th. 141,,der „ is ostensibly butch literary only belongs inside a carapace 'tak bii'Y gentility but has proved himself,

hlaoqeen writing of Lawrence in The

171'dry. Pf Sex, as perhaps the best • via,;"ritic in the States. It has masked ej in which Mailer's career has ttith ha literary artefact in its own right, idas Meant. more particularly since Zidos-e'1950s, that it has the same 1,7st ,c:Pe of recessed antitheses, of L4+4ri 4 n'sessive oppositions, the same se, ag ventriloquism and parodic (not f•-•Parodic) shifting of styles that ,1914iieree,h in his writing. lin,18 so Much a literary figure that by with Flaubert — and the nl„'" °Y no means grotesque — style kn'arce,ly a commentary on action but ,(It! bi„ "DI% And, like Flaubert. he has a „lhis "Locuiaire. A fully-fledged Mailer 11.4k c°htext, as so often with Mailer, 441 in

, huendo is inescapable, so that

r consummated ' comes to mind) .,t;INf.14111). a cultural revolution against „Ioteks:•11s dialectic, as Poirier shows, can s ihn e b L come simplistic: it can never verYrifgiesis. At best synthesis would 'her seari,other dualism, would provoke a Oreeisraies of oxymorons or oppositions. fortn this dialectic takes is less ellai0„ an the energy and discontent, IV, is of ambivalence ," that inform u0th to agree with Poirier that e sati:fheer repetitiousness makes it irti‘vhilkole,-actorY to consider his work as VIlatly (4,s, some sort of unfinished )6, caQ0"„hwts detractors would no doubt rciny) of which Mailer is not ;1)?r; ta-neci composer but virtuoso con QNI\, to disagree with Poirier's 'rh'eif-contradictory corollary that .'"lvITH-`,110tv -;.„aY be expected sometime, YieNcip:IProduce a sort of summum, .a keenteri (surely an odd choice, even f lithat late-Victorian canard that proci..e not-quke-nice Miss Eliot r‘",ced the novels of Ouida?) -:ch. ut his work is not only 't is by definition disjunctive.

Here again the precise forms his dialectic takes are less important than its probing and necessarily self-perpetuating nature. Absence of dialectic is not a negative. It is a denial. In Mailer, the central symbol is classically a sexual one; the analogy of the sexual and creative acts, the antithesis between an etiolated technological civilisation, as emasculatory of creative as of sexual energy, capable of denaturing or denying that final orgasm, death and has even raped the fabled moon, corporation,' i.e. " DC, direct current, diehard change, no dialectic man, just one-way street . . ", and the Hip hero, The Novelist. Similarly, the tie-up between a sterile war and a sterile sexuality. Mailer himself has drawn the analogy between the bombing of Vietnam and the ' bombing' of oneself — masturbation.

This may seem a little redolent of déjetlu, of contemporary and fashionable American hang-ups about sex, society and the war. It may also appear reminiscent of a received genre, dating back through Eliot to the mediaeval Quest-figure and further. It certainly reeks of the pastoral, itself a prominent part of the American literary dream. But in Mailer this pastoral, as Poirier acutely notes, is lighting out for a lost territory, for the ambiguous innocence of a post-Freudian childhood, as witness the purification ceremony' in Why are we in Vietnam? Similarly, Mailer's Calvinist approach to sex gives his dialectic an odd twist. Without his emphasis on guilt as " the existential edge of sex," Mailer's equation of the technological and sexual revolutions, his dislike of Women's Lib in general, is difficult to understand. Sex is "the dangerous edge of things," and Mailer's world, as much as Reverdy's, trembles perpetually on the edge of the precipice.

What is, on occasion, an ingenuous concern with the dialectic, with duality, works to Mailer's advantage when he turns, more directly, to reportage.' It would be difficult to deny that he is a journalist of genius, even if his essentially staccato technique of pin-pointed description is caviare to a general public brought up on the bromide sequences of Theodore White and his followers. Richard Poirier's study is peculiarly valuable here, since Mailer has both the novelist's and the historian's sense of time. Politically maverick Mailer may be, no more than "the Messiah of the one night stand," his programme of " existential politics " hopelessly lacking alike in pragmatism and continuity: but as a political reporter, his participation in an event is as near threedimensional as would seem possible. Mailer is able, when witnessing or taking part in an event, to see it at once in the present, the past, and to project a future perfect, which is why The Armies of the Night and Miami and the Siege of Chicago are such extraordinary tours de force. This is an elegant and acute book, It's also (and this can hardly be easy, given Mailer) coolly distanced from its subject. Should there be criticism, it would hinge on a clarity almost too complete; Richard Poirier's Mailer is not only somewhat endimanche (for all the brave Anglo-Saxon that punctuates the text), he also and damagingly lacks loose-ends.