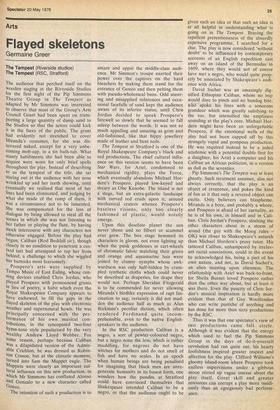 The audience that perched itself on the wooden staging at the Riverside Studios for the first night of the Pip Simmons Theatre Group in The Tempest as adapted by Mr Simmons was interested to observe that most of the Group's Arts Council Grant had been spent on transporting a large quantity of damp sand to the Studios so that the actors could kick it in the faces of the public. The grant had evidently not stretched to cover Miranda's costumes, for she was discovered naked, except for a very unbecoming mob-cap, in a tin bath-tub. What scanty habiliments she had been able to acquire were worn for only brief spells throughout the play. Instead of describing to us the tempest of the title, she sat staring out at the audience with her nose wrinkled up and her teeth showing, until eventually we realised that most of her lines had been eliminated, and judging by What she made of the rump of them, it was a circumstance not to be lamented. She was compensated for the loss of dialogue by being allowed to steal all the scenes in which she was not listening to her father or playing the flute, by having Mock intercourse with any characters not otherwise engaged. Before the play had begun, Caliban (Rod Beddall sic), though Clearly in no condition to penetrate a custard tart had attempted to tup her from behind, a challenge to which she wiggled her buttocks most fearsomely.

Prospero's arts were supplied by Tempo Music of East Ealing, whose cunning devices enabled Chris Jordan, who Played Prospero with pronounced grunts in lieu of poetry, a habit which even the Royal Shakespeare Company appears to have eschewed, to fill the gaps in the

flayed skeleton of the play with electronic weather and supernatural howls. He was Principally concerned with the performance of his own musical contributions, in the syncopated two-four nYmn-tune style popularised by the very Wealthy Andrew Lloyd Webber. For some reason, perhaps because Caliban Was a dilapidated version of the Admir able Crichton, he was dressed as Robinson Crusoe, but at the climatic moment, turned into Sam the Muppet eagle. The

KIPpets were clearly an important cultural influence on this new production, in

Which Mr Simmons has conflated Alonso and Gonzalo to a new character called Gonzo.

The intention of such a production is to amaze and appal the middle-class audience. Mr Simmon's troupe exerted their power over the captives on the hard bleachers by making them stand for the entrance of Gonzo and then pelting them with pseudo-wholemeal buns. Odd sneering and misapplied references and occasional facefulls of sand kept the audience aware of its inferior status, until Chris Jordan decided to speak Prospero's farewell so slowly that he seemed to fall asleep between the words. It was not so much appalling and amazing as grim' and old-fashioned, like that hippy jewellery made of leather and bent nails.

The Tempest at Stratford is one of the Royal Shakespeare Company's black and red productions. The chief cultural influence on this version seems to have been Star Wars, for Ariel, condemned to mechanical rigidity, plays the Force, which eventually abandons Michael Hordern's Prospero, played low-keyed and dreary as Obe Kenobe. The island is not a stage, but an extra-galactic landscape with curved red cruds upon it, around mechanical craters whence Prospero's baseless visions, only too clearly fashioned of plastic, would noisily emerge.

Upon this desolate planet the sun never shone and no filbert or scammel ever grew. The box stage hemmed its characters in gloom, not even lighting up when the punk goddesses in cart-wheels of chromatic fabric matching their green and orange and aquamarine hair were joined by clumsy nymphs whose awkwardness was only half-hidden by crumpled synthetic cloths which could never be described as draperies, for drape they would not. Perhaps Sheridan Fitzgerald is to be commended for never allowing Miranda's birdlike expression of rapt fascination to sag; certainly it did not madden the audience half as much as Alan Rickman's peculiar diction, which often rendered Ferdinand quite incomprehensible, even to the native Englishspeakers in the audience.

In the RSC production Caliban is a negro, a sort of pewter-coloured negro, but a negro none the less, which is rather muddling, for negroes do not have witches for mothers and do not smell of fish and have no scales. In an epoch when human beings are being penalised for imagining that black men are unregenerate humanity in its basest form, one wonders how the pundits at Stratford could have convinced themselves that Shakespeare intended Caliban to be a negro, or that the audience ought to be given such an idea or that such an idea is at all helpful in understanding what is going on in The Tempest. Braving the repellent pretentiousness of the absurdly expensive programme, I searched for a clue. The play is now considered 'without doubt' to be influenced by contemporary accounts of an English expedition cast away on an island of the Bermudas in 1609, where they would not of course have met a negro, who would quite properly be associated by Shakespeare's audience with Africa.

David Suchet was an amazingly dignified Ethiopian Caliban, whom no imp would dare to pinch and no bandog bite, who spoke his lines with a sonorous grandeur which was greatly satisfying to the ear, but intensified the emptiness sounding at the play's core. Michael Hordern might have been an unforgettable Prospero, if the emotional wells of the play had not been capped off by this strangely vapid and pompous production. He was required instead to be a jaded academic with a potential double first for a daughter, his Ariel a computer and his Caliban an African politician, in a version as dull as the seventies.

Pip Simmons's The Tempest was at least ghastly. Such treatment assumes, alas not always correctly, that the play is an object of reverence, and pokes the kind of fun at it that only a revered object can excite. Only believers can blaspheme. Miranda is a bore, and probably a whore, and Prospero is afraid of her carnality, as he is of his own, in himself and in Caliban. Chris Jordan's Prospero, sloshing the other characters about in a storm of sound (the guy with the Moog rules — OK) was closer to Shakespeare's autarch than Michael Hordern's prosy tutor. His tattered Caliban, unhampered by irrelevant racial associations, could in the event be acknowledged his, being a part of his own nature, and not, as David Suchet's, an alien insisting upon alienness. The relationship with Ariel was back-to-front, for Sheila Burnet loved Prospero rather than the other way about, but at least it was there. Even the paucity of Chris Jordan's musical inspiration is hardly more evident than that of Guy Woolfenden who can write pastiche of anything and has done for more than sixty productions by the RSC.

Thus it was that one spectator's view of two productions came full circle. Although it was evident that the energy which used to fuel the Pip Simmons Group in the days of do-it-yourself revolution had run quite out, his hearty foolishness inspired greater respect and affection for the play. Clifford Williams's gloomy island-room where Prospero took endless supervisions under a gibbous moon stirred up vague unease about the play itself. Great skill and greater resources can corrupt a play more insidiously than an egregiously bad performance.