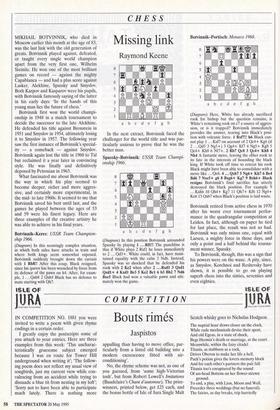 MIKHAIL BOTVINNIK, who died in Moscow earlier this month at the age of 83, was the last link with the old generation of greats. Botvinnik played against, defeated, or taught every single world champion apart from the very first one, Wilhelm Steinitz. He won one of the most brilliant games on record — against the mighty Capablanca — and had a plus score against Lasker, Alekhine, Spassky and Smyslov. Both Karpov and Kasparov were his pupils, with Botvinnik famously saying of the latter in his early days: 'In the hands of this young man lies the future of chess.'

Botvinnik first won the world champi- onship in 1948 in a match tournament to decide the successor to the late Alekhine. He defended his title against Bronstein in 1951 and Smyslov in 1954, ultimately losing it to Smyslov in 1957. The following year saw the first instance of Botvinnik's special- ity — a comeback — against Smyslov. Botvinnik again lost the title in 1960 to Tal but reclaimed it a year later in convincing style. He was finally and definitively deposed by Petrosian in 1963.

What fascinated me about Botvinnik was the way in which his play seemed to become deeper, richer and more aggres- sive, and certainly more experimental, in the mid- to late 1960s. It seemed to me that Botvinnik saved his best until last, and the games he played between the ages of 53 and 59 were his finest legacy. Here are three examples of the creative artistry he was able to achieve in his final years.

(Diagram) In this seemingly complex situation, in which both sides have attacks in train and where both kings seem somewhat exposed, Botvinnik suddenly brought down the curtain with 1 Rb8!! After this coup, Black resigned, since his queen has been wrenched by force from its defence of the pawn on h4. After, for exam- ple, 1 Qxb8 2 Qxh4 Black has no defence to mate starting with Qh7. In the next extract, Botvinnik faced the challenger for the world title and was par- ticularly anxious to prove that he was the better man.

(Diagram) In this position Botvinnik astounded Spassky by playing 1 —Rill! The punchline is that if White plays 2 Rxf1 he loses immediately to 2 ... Qd3+. White could, in fact, have main- tained equality with the calm 2 Nd6. Instead, Spassky was so shocked that he defended his rook with 2 Kc2 when after 2 ...lball 3 Qxdl Qxdl+ 4 Kxdl Be3 5 Keg Bc1 6 b3 Bb2 7 Nd6 BxeS Black had won a valuable pawn and ulti- mately won the game.

Botvinnik retired from active chess in 1970 after his worst ever tournament perfor- mance in the quadrangular competition at Leiden. In fact, although on paper he tied for last place, the result was not so bad. Botvinnik was only minus one, equal with Larsen, a mighty force in those days, and only a point and a half behind the tourna- ment winner, Spassky.

To Botvinnik, though, this was a sign that his powers were on the wane. A pity, since, as Smyslov, Korchnoi and Reshevsky have shown, it is possible to go on playing superb chess into the sixties, seventies and even eighties.