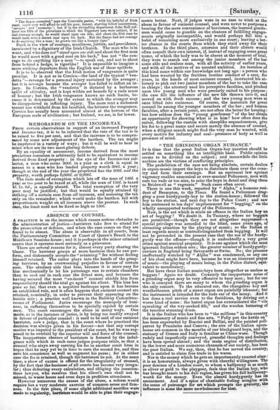 " THE GRINDING ORGAN NUISANCE." IT is time that the

great Italian Organ-boy question should be settled on something like an intelligible basis. Public opinion seems to be divided on the subject ; and meanwhile the little urchins are the victims of conflicting principles.

The prohibition of the race not being absolute, certain dealers in organ-music import the boys to distribute them over the coun- try and farm their earnings. But an equivocal law against vagrancy enables unmusical or over-musical Policemen, men with ears too rude or too nice, to seize the boys in detail and drag them to Bridewell as " vagrants." Such cases often occur. There is one this week, reported by " Alpha," a humane resi-

dent of Brompton, to the Times. He found a Policeman drag- ging a poor hurdygurdy-boy to the station-house; followed the boy to the station, and next day to the Police Court ; and saw him sentenced to ten days' imprisonment for " begging," on the wholly unsupported testimony of the Policeman. Now, is the act which is made an offence in the Italian boy an act of begging ? We doubt it. In Tuscany, where no begga

are permitted—though they are not altogether supp —a special privilege was accorded to the blind, some years ago, of attracting attention by the playing of music ; so the Italian at least regards music as contradistinguished from begging. It will not be pretended in the present case that the use of the hurdy- gurdy was the offence—though it is undoubtedly a very great crime against musical propriety. It is one against which the most ignorant Italian seldom errs ; the greater number of hurdygurdy- carriers in England being Savoyards or Swiss. No; the prisoner ineffectually watched by " Alpha " was condemned, as any one of his class might have been, because he was an itinerant player of music—the playing of music being, in the Police dialect, equi- valent to mendicancy. But have these Italian music-boys been altogether as useless as beggars Again we doubt. Certainly the inopportune noise of a grinding organ may be very offensive to busy men ; but for one who is annoyed there are many to whom the grinding organ is the only concert. To the educated ear, the changeless key and weatherbeaten pitch of a street organ are painfully irksome; but the instrument is intended for the rude ear of the many. And it has done a real service even to the fastidious, by driving out a worse kind of noise : the barrel organ has exterminated the " vile squeaking of the wry-necked fife," and the wooden battering of the tuneless stunning drum. It is the Italian who has been to "the millions" in this country the missionary of music and fine arts. "Polly put the kettle on has been superseded by Rossini and Bellini, and the painted poll- parrot by Praxiteles and Canova ; the airs of the Italian opera- house are common in the mouths of our blackguard boys, and the statuary of Greece and Italy is familiar as China-ware. Though rudely and imperfectly conveyed, graceful thoughts and feelings have been spread abroad ; and the main engine of distribution, in the lower and more numerous channels of our society, has been the poor Italian. We say, then that he has served the country, and is entitled to claim free trade in his wares.

Nor is the money which he gets an importunately exacted alms : it is an honorarium, always given with cheerful willingness. The poor denizen of a London court, to whom a halfpenny is as much as silver or gold to the playgoer, feels that the Italian boy, who has brought music to his dull region, has given his full halfpenny- worth for the money. Even the absurd hurdygurdy has Its amusement. And if a spice of charitable feeling mingles with the sense of patronage for art which prompts the gratuity, the influence is none the more unwholesome for that.