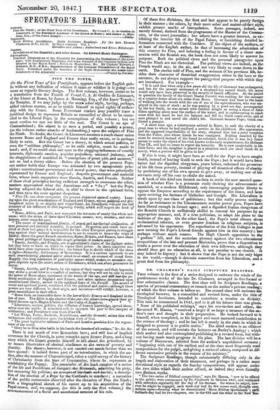 DISTORT. pins the Ninth or the First Year of hie Pontificate. Ey Count C. A. de-Geddes de Liancourt, of the Peratiiical Academy of the Lined. aaltoinei, audJaines A. Man-

Johnson, R.N., .Supeatendeat of the Compass-Department°, the Royal Navy. Published under the Sanction of the Right Honourable Um Lards Com- missioners of the. Admiralty 4418.1,44.-Pdfflielb PI-US THE NINTH, Or the First Year of his'Pontificate, appears before the English pub- lic without any indication of whence it catoe,or.wbither ft isgoing--swe mean as regards literary design. The first -v.oltune, hOweyer, seems to be a translation from the French of Conet fierseddes de Liancourt, of the Lincei at Rome, by James A. Manniv, Esq., of the InoerTemple ; the Templar, if we ,may judge by .the MOO saber style , having, perhaps, added various matter, so as-to. entitle himself to eqrstai rights of author- ship with the Count. Some Protestant readers may possibly trace a jesuitical design to represent Britain as reconciled or about to be recon- ciled to the Liberal Pope, in the assumptions of this volume ; but we must confess we can see little -of -the sort. 'The. Count is an ape of Chateaubriand ; his •objeet is • to turn a period, and possibly a-penny, (as the volume rather-smacks of bookmaking,) upon the subjectof Pius the Ninth. No doubt, the Count de Liancourt assumes a nineheloser union between Rome and England and France than really exists,- or is perhaps likely to exist. But the Count has a theory, to. which actual politics, or even the "sublime philosophy," as he calls--religion, must, be -made to bend; and, if we could shut-our eyes to• the cloggingittflueaces-of courtly interests, diplomatic caution, popular, prejudices, national, jealousy, and the sluggishness of mankind- in • " enterprises of great pitkoad. moment," not so bad a theory either. -.Before the election of the present Pope, our author holds that 'Europe was .anirnated -by two antagonistic prin- ciples : constitutional government anti moral power, -that were principally represented by France and finglaud ; despotic government and material force, whose main supporters-were Russia, Austria, and,Prusoia. Neither of these rival principlee.baring safficient strength-to overcome the other, matters approached what the Americans call a *fix ;" but the Pope, having adopted the Liberal side' . is: able' to•throw in:the-spiritual force, and thus turn the scale against despotism. " Pius IX. can alone reorganize the present di.lainteel state:of. somiety. Lean- ing upon the giant ponstitgipus .Eugl mid and kir awe, w hose, politieal and phi- losophical union „isrrso, o*Itty and magni6e.ant, Pentiftenta.wiIIadd the full measure of his Milt:epee to that imposing trmity, tghiek.pit reopen the book of miracles.

" Rome, ,Albion,-and Paris, now represent the interests of nearly the whole uni- verse: with the Union of these,th.res Christian, crowns,. war,. troutdes,, and revo- lutions, must ceitss for seer. " The cause of coastinitiooaljiherty„„of„memlaaclinteliscteal civilisation, of true personal and national morality, la assured. Devotmmand revolt have ar- rived at their last gasp; it is impossible for the other European powerato struggle long against their mutual -determination to act in concert to msursthe reign of liberty. Since the wait French.nevolution,,Rom.Britirin.„and Famiceohave alone the proud privilogo of formingthis atattle, oriaciFtle:00nedernaleeirty. "Russia, Austria, and 1'aisida, are Augueatimiably,.etatea.of theIAghest order; but they have no basis on which to repose their ,power. Iu those countries ma- terial force alone represents Divinity; the future has to decide Which of the three is right—Monarchy, Aristocracy, or Democracy. It is a curious spectacle to see each overwhelming ,physical power _allied. to so small. as rimmint.-of moral force. Happily, this long..eunnexion,2of partinlar,eanses srhiplinmakea,K4Ipulaltes =- pees depends upon the aperet ar..dge, of krogideope, whielimilialoncpromunce its decree. "Russia, Austria, and r,ussia,-by the union of their cannon. and their, bayonets, may strike a grand 4ilow in a conflict of nations; but they will not -be able to resist the power of Rome alone, cognizant of the wants.of.the agerand ra1l lessithe po- litical combination of fiegland and Europe ,apt,akher Aoftions,detersisiaed upon constitutional liberty, touted to the spit:inn:14re of the rent,ift The-accord of moral and spiritual power, combined With the paitical, and somal=olthough these powers are very different in their origiu,and resources—aill exhibit, however, a great resemblance in their effect.

There is not much of truelpmanism • here;,and -still less of implicit reverence for the Church,,in some remarks ppoojerpter, gopes, and along story which the C,onnt,pertnits himself to,telbabout,the, priesthood, by no means illustrativeoLelerieal obedience roc the,,voirsoif poverty and chastity. His theorythowover, is not -carried oatainchtfurther than we have quoted : it indeed forms part of, an introduction, in which the au- thor, after the manner of Chateaubriapd„ takes a -rapid survey of the history of Christianity from the time pf Constp.otioe, whom , he , represents as establishing the Papacy. The Xemaioder of ,the:boek ommists of a notice of the life and Pontificate,of.Caregarythe anteetalho sitting his piety, but censuring his polities;...alt.aceunatt.of liar:loath andantrial ; a descrip- tion of the election of ,a Pepe . by the' Celt Metain coothave ; a narrative of the public ceremonies observed after the elevation of Pius the Ninth ; with a biographical sketch of his career up to his acquisition of the Papal crown, and, we suppose, (as this is only the first volume,) the commencement of a florid and auecdotical account of his rule.

Of these five divisions, the first and last appear to be purely foreign in their manner ; the others, by their more sober and matter-of-fact style, exhibit greater marks of interpolation. Some passages, indeed, are merely formal, derived from the programme of the Master of the Ceremo- nies, or the court journalist ; but others have a greater interest, as ex- hibiting the interior life of the Papal Palace, or furnishing detailed in- formation oonnected with the Conclave. If the object of the authors, or at least of the English author, be that of increasing the admiration of this country for Pius, and inducing a feeling in favour of a closer con- nexion with the Romish see, the book does not seem likely to answer its purpose. Both the political views and the personal panegyrics upon Pius the Ninth are too rhetorical. The political views are indeed, as the French would say, in the air, and not very likely to come down to the earth. The stories told of Pius, and the account of his previous life, be- sides their character of theatrical exaggeration either in the hero or the narrator, do not always support the panegyrical purpose with which they are introduced. For example-

" It is said that when only a few years old the life of Giovanni was endangered, and but for the prompt assistance of a shepherd-boy named Guidi, his name

would only have been preserved in the records of family affliction. At the period

in question the family of the Count Hastai Ferretti was residing for the stunner at a country-house about six miles from Rome. Giovanni had been in the habit

of walking into the woods with the son of one of the agriculturists, who was em-

ployed in the care of stock: as he was passing by a pond one day, accompanied by the boy Guidi, he was struck with childish delight at seeing a shoal of little fishes sporting about near the surface of the water, and in endeavouring to catch some with his hand he lost his balance and fell in: Guidi could swim, and at once plunged in and saved the child's life. Giovanni became Pope; Guidi con- tinued a peasant.

" A short time ago, a countryman arrived in Rome, to seek the charity of a great man to whom he had rendered a service in his childhood. His appearance,

and the supposed improbability of his story, obtained him but a sorry reception from the Police, into whose hands he was consigned. Nothing daunted by the stone he received instead of the bread he solicited, Guidi (for it was he) found

means to make the object of his visit known to his early acquaintance, his idolinesa Pius IX., and had no cause to repent his temerity. He is now comfortable in his little farm; and his daughter is placed in a situation until she shall think fit to marry, when a portion will be given to her."

If this is true, it might have been as well for the Pope to have sought Guidi, instead of leaving Guidi to seek the Pope ; but it would have been better had the dignified clergyman, years before, redeemed the preserver of his life from poverty, instead of playing off theatrical effects of charity by purloining one of his own spoons to give away, or making one of his servants strip off his coat to clothe the naked.

A book of this kind can furnish no data to settle the now mooted ques- tion of whether Pius is a potentate really desiring the advancement of mankind, or a modern Hildebrand, only encouraging popular liberty to oppose the Emperor according to the requirement of the times, and bent upon reviving the factions of Ghibeline and Guelph. His Liberalism is dwelt upon by one class of politicians ; but this really proves nothing.

As far as resistatioe to the Ultraniontaue secular power goes, Popes have been liberal enough in former ages; and a dignified Italian clergyman of the Romish Church is sufficiently skilful to conceal his purposes by an

appropriate manner, and, if a true politician, to adapt his plans to the fashions of the age. On the other hand, the Pope's total sileuee about ecclesiastical reforms, or even greater freedom in religious subjects, is

advanced by his opponents. The repudiation of the Irish Colleges is just now turning the Pope's Liberal friends against him in this country; but

perhaps without much reason. The High Church opposition to the " godless" bill, and the sectarian phrensy against the two educational propositions of the late and present Ministries, prove that a disposition to retain a power over the education of their own followers, although they should thus get no education at all, is not peculiar to one church. It may indeed be bigotry ; but it shows that the Pope is not the only bigot in the world,--though it detracts somewhat from his Liberalism, and a great deal from his philosophy.