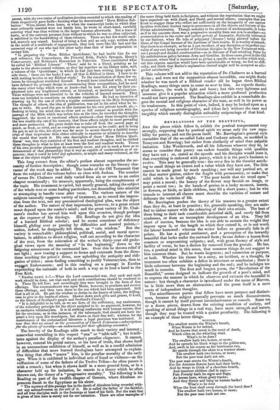 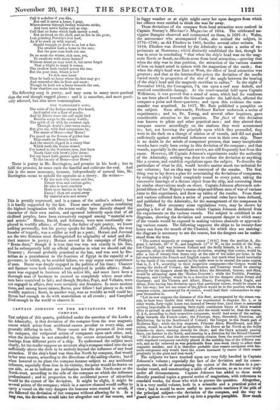 Page 16, 20 November 1847 — REVELATIONS OF THE BEAUTIFUL, AND the pieces which follow it,
Close

REVELATIONS OF THE BEAUTIFUL, AND the pieces which follow it,

exhibit the poetical temperament very strongly, supposing that by poetical spirit we mean only the raw capa- bility for poetry, and not the poem itself. Mr. Burrington's general style resembles that of the so-called Lake and Cockney schools, as modified in Tennyson and Bowring; but rather from similarity of mind than palpable imitation. Like Wordsworth, and all his followers whoever they be, he seems to consider that poetry can endow humble things with qualities they have not ; or, stated as the apostle and his disciples would state it, that everything is endowed with poetry, which it is the poet's business to evolve. This may be generally true : the error lies in the theorist ascrib- ing to small things an extent and a value which they have not. The little cannot be made great by much speaking; nor will any poetical art, or for that matter genius, endow the fragile with permanency, or make that solid which is in itself slight. " The poor beetle that we tread upon " may point a moral ; the beauty of the flower may furnish an image, or point a moral too ; in the hands of genius in a lucky moment, insects, or flowers, or birds, or little children, may fill a short poem ; but he who intends to interest all classes must describe the varieties of nature and delineate the varieties of life.

Mr. Burrington pushes the theory of his masters to a greater extent than they do, at least in practice; for, generally speaking, they are satis- fied to imbue nature with the colouring of their own minds. The best of them bring to their task considerable artisticai skill, and rarely fail from crudeness, or from an incomplete development of an idea. They fall short of success, because the idea is not able to sustain the weight they impose upon it, or the -length to which they extend it, or is not worth the labour bestowed : whereas the writer before us generally fails in all points. He has a genial sentiment, and a perception of the inwardly beautiful that lurks under the outward form; he can deduce a lesson from common or unpromising subjects ; and, with great fluency of style and facility of verse, he has a diction far removed from the prosaic. He has, too, a poetical mind in this sense, that common things do not suggest to him common ideas. But he wants largeness; and connexion or purpose, or both. Whether his theme be a story, an incident, or a thought, its treatment too often exhibits a defect in structure or conclusion ; there is little coherence between the beginning and the end ; and he indulges too much in conceits. The first and longest poem, the "Revelations of the Beautiful," seems designed to indicate the growth of a poet's mind, and to express the manner in which he observes and extracts the beautiful in nature: but though a character is introduced under the name of Morven, he is little more than an abstraction ; and the poem itself is a mere cento of independent thoughts.

The miscellaneous poems that follow have more purpose and distinct- ness, because the subject generally prevents so much discursiveness, though it cannot by itself prevent inconclusiveness or conceit. Some ten or a dozen pieces, drawn from the existing condition of society, and speaking of actual things in a real way, have more strength and nature, though they may be treated with a quaint peculiarity. The following is an example of these better things.

Theswallow scents the Winter's breath, When Winter is far behind, And he knows that scent is the scent of death, Which rides on the whistling wind.

What's to be done?

The swallow bath two homes, or more; And he spreads his black wings to the golden sun, And, swift in his course as the hurricanes run,

He speeds through the skies to a warmer shore:

The swallow hath two homes, or more; But the poor man bath not one.

The poor man scents the Winter's dearth, Ere the Autumn flowers have had their birth; And he weeps to think of a cheerless hearth,

And innocent children clad in rags,—

Pale Poverty bath its signs and flags, As heroes have, whom glory tracks;

And they tlutt.er and hang on human backs!

What's to be done When the frost shall creep through the hovel door?

But the poor man bath not one.

Call it a shelter if you like, But call it never a home, I pray, Where storms through broken windows strike,

Call that no home which bath merely a roof, But no bread on the shelf, and no lire in the grate, Lest grinding Poverty's iron hoof, As if to mock ye with reproof, Should trample ye down to as low a fate.

The swallow hath a home in the sun; But the poor man bath not one.

Do ye scent the winter, rich men, yet, Ye swallows with many homes? Without dread ye may meet it, but never forget That a blight to many it comes. The swallow bath rushed across the sea; But the poor man, where is he? Ye rich ones know That he bath no home where his feet may go; And remember this in frost and snow; Though he hath not a home beneath the sun, Your charities can make him one.

The following song is pretty, and may seem to many more poetical than the real though rugged pieces : and it is smoother, and more poeti- cally adorned, but also more commonplace.

The voice of the Indian stream I've heard, As it sailed o'er a floor of pearls; And by Ebro's wave the soft night bird Breathe songs to the starry worlds; The spirit of air with its sweetest sigh Through Araby's date-trees roam; But give me, with fond companions by, The music of Home—dear Home !

I've gazed on the flowers of golden hue That cradle on Persia's land; And the mantle dipped in a sunny blue Which roofs the Ionian strand.

I've bowed to the Southern eyes, that burn 'Neath their rich brow's jetty dome; Yet my heart Lath panted again to turn To the beiuty of Home—dear Home !

There is poetry in Mr. Barrington, and promise in his book ; but to fulfil the promise, he must curb the fanciful and cultivate the real. And this is the more necessary, because, independently of natural bias, Mr. Barrington seems to uphold the opposite as a theory. He writes-

" By the men who dream and live,

Nature wins and nations gain; He who is most sensitive Rath most fancies in his brain. Fancy ! thou art scared !miry By material acts and actors."

This is prettily expressed, and is a canon of the author's school ; but it is hardly supported by the fact. Those men whose genius combining the highest imagination with the truest reality have directly shaped the character of their own nation, and operated indirectly upon that of all civilized peoples, have been extensively engaged among "material acts and actors." Moses, David, and Solomon, were men continually em- ployed in worldly affairs ; of Homer, the father of epic poetry, we know nothing personally, but his poetry speaks for itself; /Eschylus, the true founder of tragedy, was a soldier as well as a poet; Horace and Juvenal are the two Romans most distinguished for originality of mind and dis- tinct manner in poetry; Horace served in the campaign of Philippi, " Bruto duce," though it is true that war was not exactly in his line, and he subsequently held an official situation in what we should call the Treasury ; Juvenal probably practised at the bar, and was sent by Do- mitian as a punishment to the frontiers of Egypt in the capacity of a governor, in which, as he avoided failure, we may argue some experience of men. Dante was deeply engaged in the politics of his time; Chaucer and Spenser were both courtiers and employed in public affairs ; Shak- spere was engaged in business all his active life, and must have been a thorough man of business to succeed so completely where most other men have contrived to fail; and though Dryden, Pope, and Voltaire, were not engaged in affairs, they were certainly not dreamers. In more modern times, and among lesser names, Burns, poor fellow I had plenty to do with worldly matters; Scott, in another way, was as worldly as well could be; Byron had enough to do with materialism at all events ; and Campbell lived enough in the world to observe it.