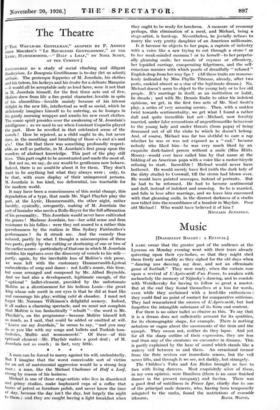 A man can be forced to marry against his will,

undoubtedly. But I imagine that the worst conceivable sort of victim for an act of matrimonial aggression would be a strong lazy man ; a man, like the Michael Challoner of Half a Loaf, strong by reason of his laziness.

Michael is one of those stage-artists who live in disordered and grimy studios, make haphazard cups of a coffee that tastes of petrol or furniture polish, and never know the time Of day, because the day isn't the day, but largely the night to them ; and they are caught having a light breakfast when they ought to be ready for luncheon. A measure of economy perhaps, this elimination of a meal, and Michael, being a stage-artist, is hard-up. Nevertheless, he jovially refuses to marry the very pretty daughter of an American millionaire.

Is it because he objects to her papa, a captain of industry with a voice like a saw trying to cut through a stone ? or to her weak-minded mamma ? or to herself—to her perpetu- ally gleaming smile, her moods of coyness or effrontery, her lopsided carriage, exasperating fidgetiness, and the self- conscious manner with which pearls of dreadfully " refaned " English drop from her rosy lips ? (All these traits are remorse- lessly indicated by Miss Phyllis Titmuss, already, after two parts, enskied almost as a star of the legitimate drama.) No, Michael doesn't seem to object to the young lady or to her old people. It's marriage in itself, as an institution or habit, he dreads ; and with Mr. Dennis Eadie to utter his indolent opinions, we get, in the first two acts of Mr. Noel Seott's play, a series of very amusing scenes. Then, with a sudden twist towards sentimentality, we get what I found a rather dull and quite incredible last act—Michael, now forcibly married, under false accusations of ungentlemanlike behaviour to the young lady and under threats (from papa) of being drummed out of all the clubs to which he doesn't belong. And, of course, Michael was far too slothful to care a rap whether he was or was not exposed as a " cad," because nobody who liked him—he was very much liked by an exquisite dark-haired person without a smile (Miss Hilda Moore)—would ever have called him by that name at the bidding of an American papa with a voice like a motor-bicycle refusing to start. Incredible ! Michael would never have bothered. He would merely have fled (with the dark lady of the dirty studio) to Cornwall, till the storm had blown over. He would have painted seascapes, instead of portraits. But he had to be reformed. He had to become sentimental and dull, instead of indolent and amusing. So he is married, and falls in love after marriage, and we leave him ensconced with that gleaming smile, in the discreet darkness of a studio now tidied into the resemblance of a boudoir in Mayfair. Poor old Michael ! Who would have believed it of. him ?