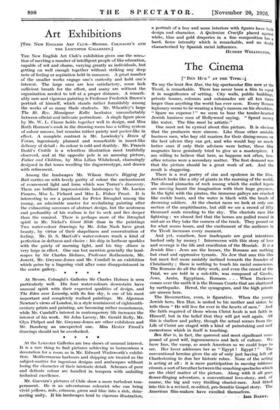 To say the least Ben Hur, the big spectacular film now at the Tivoli, is remarkable. There has never been a film to equal it in magnificence of setting. City walls, public buildings, private houses, columns and colonnades are all ten times larger than anything the world has ever seen. Every Roman legionary seems to be wearing a king's ransom on his shoulders. " Spare no expense ! " we seem to hear the tender-hearted Jewish business men of Hollywood saying. " Spend money like water. The film must be artistic."

One must not be cynical about this picture. It is obvious that the producers were sincere. Like those other amiable business men, who buy old masters for their dining-rooms on the best advice they can get, and who would buy so much better ones if only their advisers were better, these film magnates have genuinely tried to give us a masterpiece. I am willing to believe that here, as happens not often, box- office returns were a secondary matter. The first demand was that the picture should be a great work of art. And the result is staggering.

There is a real poetry of size and opulence in the film. Antioch looks like a city of giants in the morning of the world. The dismal pinnacles of rock among which the exiled lepers are moving haunt the imagination with their huge greyness. In the fight with the pirates, the immense galleys are crushed like cockle boats, and the water is black with the heads of drowning soldiers. At the chariot races we look at only one section of the amphitheatre, but still we see a crowd of fifty thousand souls receding to the sky. The chariots race like lightning : we almost feel that the horses are pulled round in mid-air as they take the corners of the track. They pound on for what seems hours, and the excitement of the audience in the Tivoli increases every moment.

And yet, somehow, how inadequate are good intentions backed only by money ! Interwoven with this story of love and revenge is the life and crucifixion of the Messiah. It is a Jewish film : Jews are the heroes, the Romans are nothing but cruel and oppressive tyrants. No Jew that sees this film but must feel more amiably inclined towards the founder of Christianity ; there is nothing to touch his racial conscience. The Romans do all the dirty work, and even the crowd at the Trial, we are told in a sub-title, was composed of Greeks; Jews, Arabs, Egyptians, Romans. . . . When Darkness comes over the earth it is the Roman Courts that are shattered by earthquake. Herod, the synagogues, and the high priests are unseen here.

The Resurrection, even, is figurative. When the young Jewish hero, Ben Hur, is united to his mother and sister, he tells them " He will live for ever in the hearts of men." And the faith required of those whom Christ heals is not faith in Himself, but in the belief that they will get well again. All this is shallow and paltry, though the actual scenes from the Life of Christ are staged with a kind of painstaking and nail earnestness which in itself is touching.

Ben Hur is, in fact, the queerest and most significant com- pound of good will, ingenuousness and lack of culture. We have Iras, the vamp, as much American as we could hope to see. Her lover addresses her as Egypt ! Egypt 1" The conventional heroine gives the air of only just having left off Charlestoning to don her historic robes. None of the acting is acting at all : it is mere participation in moving tableaux vivants, a sort of breather between the smashing spectacles which are the chief matter of the picture. Along with it all goes flower-flinging adventure, a conventional love-story, and, of course, the big and very thrilling chariot-race. And fitted into this is a revised, re-edited, pro-Semitic Gospel story. The American film-makers have excelled themselves. -