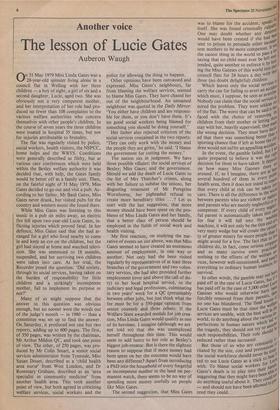 The lesson of Lucie Gates

(In 31 May 1979 Miss Linda Gates was a V 28-year-old spinster living alone in a council flat in Welling with her three children — a boy of eight, a girl of six and a second daughter, Lucie, aged two. She was obviously not a very competent mother, and her interpretation of her role had pro- duced no fewer than 108 complaints to the various welfare authorities who concern themselves with other people's children. In the course of seven years the three children were treated in hospital 35 times, but not for injuries attributable to brutality.

The flat was regularly visited by police, social workers, health visitors, the NSPCC, home helps and the WRVS. Conditions were generally described as filthy, but at various care conferences which were held within the Bexley welfare authority it was decided that, with help, the Gates family would be better off as a family unit. Then, on the fateful night of 31 May 1979, Miss Gates decided to go out and visit a pub. Ac- cording to her father, Mr Basil Gates, Miss Gates never drank, but visited pubs for the country and western music she found there.

While Miss Gates was listening to this music in a pub six miles away, an electric fire fell upon two-year-old Lucie Gates, in- flicting injuries which proved fatal. In her defence, Miss Gates said that she had ar- ranged for a girl who lived nearby to come in and keep an eye on the children, but the girl had stayed at home and watched televi- sion. She was sentenced to 18 months: suspended, and her surviving two children were taken into care. At her trial, the Recorder posed the question: 'Did society, through its social services, having taken on the burden of responsibility for little children and a strikingly incompetent mother, fail to implement its purpose or not?'

Many of us might suppose that the answer to this question was obvious enough, but no sooner were the words out of the judge's mouth — in 1980 — than a committee was set up to find the answer. On Saturday, it produced not one but two reports, adding up to 600 pages. The first, of 350 pages, was written by the chairman, Mr Arthur Mildon QC, and took one point of view. The other, of 250 pages, was pro- duced by Mr Colin Smart, a senior social services administrator from Tyneside, Miss Susan Douet, described as a 'child health area nurse' from West London, and Dr Rosemary Graham, described as an 'area specialist in community medicine' from another health area. This took another point of view, but both agreed in criticising welfare services, social workers and the police for allowing the thing to happen.

Other opinions have been canvassed and expressed. Miss Gates's neighbours, far from blaming the welfare services, seemed to blame Miss Gates. They have chased her out of the neighbourhood. An unnamed neighbour was quoted in the Daily Mirror: `You either have children and are responsi- ble for them, or you don't have them. It's no good social workers being blamed for something you should be doing yourself.'

Her father also rejected criticism of the social services contained in the two reports: `They can only work with the money and the people they are giVen,' he said. 'I blame the government for cutting the money.'

The nation sits in judgment. We have three possible villains: the social services of Bexley; Miss Gates; and the government. Should we add the death of Lucie Gates to the list of Mrs Thatcher's crimes, along with her failure to subdue the unions, her disgusting treatment of Mr Peregrine Worsthorne, her pigheaded refusal to create more hereditary titles ...? Let us start with the last suggestion, that more money should have been spent on the pro- blems of Miss Linda Gates and her family, that a better class of person should be employed in the fields of social work and health visiting.

My first reaction, on studying the nar- rative of events set out above, was that Miss Gates seemed to have created an enormous amount of employment, in one way or another. Not only had she been visited regularly by representatives of at least three branches of the government and two volun- tary services, she had also provided further employment (over and above the call of du- ty) to her local hospital service, to the judiciary and legal professions, culminating in two years' work for a QC (presumably between other jobs, but just think what the fee must be for a 350-page opinion from senior counsel) and three others. If the Welfare State awarded medals for job crea- tion, Miss Linda Gates would qualify as one of its heroines. I imagine (although we are not told so) that she was unemployed herself throughout this time. This would seem to add lustre to her role as Bexley's biggest job-creator. But is there the slightest reason to suppose that if more money had been spent on her the outcome would have been any different? Apart from introducing a PhD into the household of every forgetful or incompetent mother in the land on per- manent watch, there seems to be no way of spending more money usefully on people like Miss Gates.

The second suggestion, that Miss Gates

The Spectator 20 November JO was to blame for the accident, speaks fi°re. itself. She was found criminally et111/61/0 One may doubt whether any deterre would have been created if she had berg sent to prison to persuade other incornift tent mothers to be more competent. it , the easiest thing in the world to pass a `8, saying that no child must ever be left WI:: tended, quite another to enforce it by 1°c.r ing the Miss Gateses of this world into their council flats for 24 hours a day with di three (no doubt delightful) children. to Which leaves only the social services i carry the can for failing to avert an aceld,e, which must, I suppose, be seen as avertin". Nobody can claim that the social services ug; nored the problem. They were seldom oat of of the flat. The worst that can be said i5 trite faced with the choice of removing,4 children from their mother or letting o'cle stay with her, heavily supervised, theY mad, the wrong decision. They must have dec_; a ed that there was something better tin! sporting chance that if left at home thell c"i: dren would not suffer an appalling aeeideo In the event, the gamble failed, but lid( quite prepared to believe it was the r'it'd decision for them to have taken. It dePe-arc on how many Miss Gateses thereto around. If, as I imagine, there are at,;blic several hundred of them in every op health area, then it does not stand to rea," to that every child at risk can be taken °rid care. There is all the difference in the ‘vt?tic between parents who are violent or sarlisin, and parents who are merely neglectful °let, competent. If every child of every negirare ful parent is automatically taken int°itlig for fear it will fall into the wa,s'fa machine, it will not only be the thin eriu'ap. very nasty wedge but will create the cert, it ty of greater misery for more people th'i."0, might avoid for a few. The fact that sn Jeo children do, in fact, come serious croPP0 and so many survive owes Pruetic ev nothing to the efforts of the weltiarL,501 vices, however well-intentioned, and for everything to ordinary human instincts In other words, the gamble may nottifiel survival. paid off in the case of Lucie Gates, 1313,"1-icie has paid off in the case of 5,000 other beep Gateses who would otherwise have they forcibly removed from their parents',n- 1 no one has blundered. The final less are Lucie Gates must be that since the wet ate services are unable, with the best will in world, to do anything about theav riouesd to perfections in human nature which woe the tragedy, they should not try to as,s, such responsibilities. Their role shottiLL reduced rather than increased. ir; But those of us who are cons s ritated by the size, cost and pretensionor the social workforce should never he te„t it ted to use Lucie Gates as a stick to he'ticte with. To blame social workers for aA rl'' • Gates's death is to play into their hble to suggesting that they might have been 3,A not do anything useful about it. They collwre. —tenadntdhsehy could. have been allowed t°