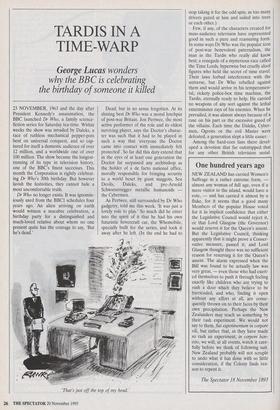 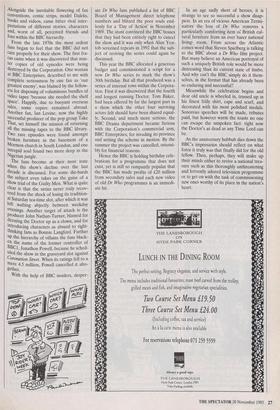 TARDIS IN A TIME-WARP

George Lucas wonders why the BBC is celebrating

the birthday of someone it killed

23 NOVEMBER, 1963 and the day after President Kennedy's assassination, the BBC launched Dr Who, a family science- fiction series for Saturday tea-time. Within weeks the show was invaded by Daleks, a race of ruthless mechanical pepper-pots bent on universal conquest, and so cap- tured for itself a domestic audience of over 12 million, and a worldwide one of over 100 million. The show became the longest- running of its type in television history, one of the BBC's finest successes. This month the Corporation is rightly celebrat- ing Dr Who's 30th birthday. But however lavish the festivities, they cannot hide a most uncomfortable truth.

Dr Who no longer exists. It was ignomin- iously axed from the BBC1 schedules four years ago. An alien arriving on earth would witness a macabre celebration, a birthday party for a distinguished and much-loved relative about whom no one present quite has the courage to say, 'But he's dead.' Dead; but in no sense forgotten. At its shining best Dr Who was a moral lynchpin of post-war Britain. Jon Pertwee, the most active performer of the role and its oldest surviving player, says the Doctor's charac- ter was such that it had to be played in such a way that 'everyone the Doctor came into contact with immediately felt protected'. So far did this duty extend that in the eyes of at least one generation the Doctor far surpassed any archbishop as the holder of a de facto national office, morally responsible for bringing security to a world beset by giant maggots, Sea Devils, Daleks, and pre-Arnold Schwarzenegger metallic humanoids the Cybermen.

As Pertwee, still surrounded by Dr Who gadgetry, told me this week, 'It was just a lovely role to play.' So much did he enter into the spirit of it that he had his own futuristic hovercraft car, the Whomobile, specially built for the series, and took it away after he left. (In the end he had to 'That's just off the top of my head.' stop taking it for the odd spin, as too many drivers gazed at him and sailed into trees or each other.)

Few, if any, of the characters created for mass-audience television have represented good in such a pure and reassuring form. In some ways Dr Who was the popular icon of post-war benevolent paternalism, the man in the Tardis who really did know best; a renegade of a mysterious race called the Time Lords, hyperwise but cruelly aloof figures who held the secret of time travel. Their laws forbad interference with the universe, but Dr Who rebelled against them and would arrive in his temperamen- tal, rickety police-box time machine, the Tardis, eternally ready to help. He carried no weapons of any sort against the lethal exterminator rays of his enemies. When he prevailed, it was almost always because of a ruse on his part or the excessive greed of the villains. Each time the Daleks, Cyber- men, Ogrons or the evil Master were defeated, a generation slept a little easier.

Among the hard-core fans there devel- oped a devotion that far outstripped that for any other British television serial. Alongside the inevitable flowering of fan conventions, comic strips, model Daleks, books and videos, came bitter rival inter- pretations of different stories, characters and, worst of all, perceived friends and foes within the BBC hierarchy. From the late 1970s the most ardent fans began to feel that the BBC did not care properly for their show. The first fra- cas came when it was discovered that mas- ter copies of old episodes were being destroyed by the Corporation. One woman at BBC Enterprises, described to me with Complete seriousness by one fan as 'our greatest enemy', was blamed by the follow- ers for disposing of voluminous bundles of video tapes 'because she needed the shelf space'. Happily, due to buoyant overseas sales, some copies remained abroad. Another fan, Ian Levine, now the highly successful producer of the pop group Take That, set himself the mission of returning all the missing tapes to the BBC library. Two rare episodes were found amongst broken furniture in the basement of a Mormon church in South London, and one intrepid soul found two more deep in the Nigerian jungle. The fans become at their most irate when the show's decline over the last decade is discussed. For some die-hards the subject even takes on the guise of a show trial of the Guilty Men. What is quite clear is that the series never truly recov- ered from the shock of losing its tradition- al Saturday tea-time slot, after which it was left wafting abjectly between weekday evenings. Another target of attack is the producer John Nathan-Turner, blamed for dressing the Doctor up as a clown, and for introducing characters as absurd to right- thinking fans as Bonnie Langford. Further up the hierarchy of villains the fans black- en the name of the former controller of 13BC1, Jonathon Powell, because he sched- uled the show in the graveyard slot against Coronation Street. When its ratings fell to a mere 4.5 million, Powell cancelled it alto- gether.

With the help of BBC insiders, desper- ate Dr Who fans published a list of BBC Board of Management direct telephone numbers and blitzed the poor souls end- lessly for a 'Day of Action' in November 1989. The stunt convinced the BBC bosses that they had been entirely right to cancel the show and it was only when Alan Yen- tob screened repeats in 1992 that the sub- ject of reviving the series could again be discussed.

This year the BBC allocated a generous budget and commissioned a script for a new Dr Who series to mark the show's 30th birthday. But all that produced was a series of internal rows within the Corpora- tion. First it was discovered that the fourth and longest running Doctor, Tom Baker, had been offered by far the largest part in a show which the other four surviving actors felt should have been shared equal- ly. Second, and much more serious, the BBC Drama department became furious with the Corporation's commercial arm, BBC Enterprises, for invading its province and setting the scheme in motion. By the summer the project was cancelled, ostensi- bly for financial reasons.

Hence the BBC is holding birthday cele- brations for a programme that does not exist, yet is still so rampantly popular that the BBC has made profits of £20 million from secondary sales and each new video of old Dr Who programmes is an immedi- ate hit. In an age sadly short of heroes, it is strange to see so successful a show disap- pear. In an era of vicious American Termi- nators the loss of Dr Who removes a particularly comforting item of British cul- tural furniture from an ever barer national living- room. From across the Atlantic comes word that Steven Spielberg is talking to the BBC about a Dr Who film project. But many believe an American portrayal of such a uniquely British role would be more distressing than its current state of limbo. And why can't the BBC simply do it them- selves, in the format that has already been so enduring and successful?

Meanwhile the celebration begins and dear old uncle is wheeled in, trussed up in his finest frilly shirt, cape and scarf, and decorated with his most polished medals. Sonorous speeches will be made, tributes paid, but however warm the toasts no one can escape the unspoken fact: right now the Doctor's as dead as any Time Lord can be.

As. the anniversary hubbub dies down the BBC's impresarios should reflect on what force it truly was that finally did for the old fellow. Then, perhaps, they will make up their minds either to revive a national trea- sure such as this thoroughly unthreatening and fervently adored television programme or to get on with the task of commissioning new ones worthy of its place in the nation's heart.