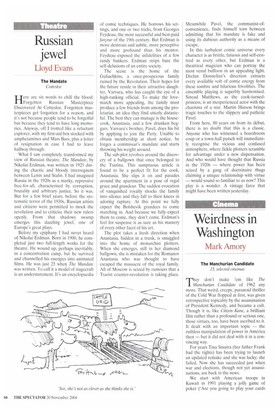 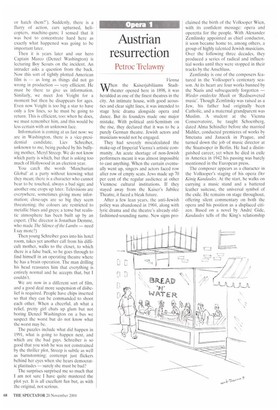 rrhey don't make 'em like The 1 Manchurian Candidate of 1962 any more. That weird, creepy, paranoid thriller of the Cold War flopped at first, was given retrospective topicality by the assassination of President Kennedy, and became a cult. Though it is, like Citizen Kane, a brilliant film rather than a profound or serious one, those virtues, too, have been ascribed to it. It dealt with an important topic — the ruthless manipulation of power in America then — but it did not deal with it in a convincing way.

For years Tina Sinatra (her father Frank had the rights) has been trying to launch an updated remake and she was lucky; she failed. Now she has succeeded just when war and elections, though not yet assassinations, are back in the news.

We start with American troops in Kuwait in 1991 playing a jolly game of poker (`Are you going to play your cards or hatch them?'). Suddenly, there is a flurry of action, cars upturned, helicopters, machine-guns; I sensed that it was best to concentrate hard here as exactly what happened was going to be important later.

Then it is years later and our hero Captain Marco (Denzel Washington) is lecturing Boy Scouts on the incident. An intruder asks a question from the back. Now this sort of tightly plotted American film is — as long as things did not go wrong in production — very efficient. He must be there to give us information. Similarly, we meet Jon Voight for a moment but then he disappears for ages. Even now Voight is too big a star to have only a few lines, so he must be going to return. This is efficient, too: when he does, we must remember him, and this would be less certain with an unknown face.

Information is coming at us fast now: we are in Washington, there is a vice-presidential candidate. Liev Schreiber, unknown to me, being pushed by his bullying mother, Meryl Streep. We do not know which party is which, but that is asking too much of Hollywood in an election year.

You catch the words 'Manchurian Global' at a party without knowing what they mean; there is a character who cannot bear to be touched, always a bad sign; and another one crops up later. Televisions are everywhere, sometimes giving more information; close-ups are so big they seem threatening; the colours are restricted to metallic blues and greys; a tense but realistic atmosphere has been built up by an expert. (The director is Jonathan Demme, who made The Silence of the Lambs — need I say more?) Then young Schreiber goes into his hotel room, takes yet another call from his difficult mother, walks to the closet, to which there is a false back, so he goes through to find himself in an operating theatre where he has a brain operation. The man drilling his head reassures him that everything is entirely normal and he accepts that, but couldn't.

We are now in a different sort of film, and a good deal more suspension of disbelief is required. People have chips inserted so that they can be commanded to shoot each other. When a cheerful, ah what a relief, pretty girl chats up glum but not boring Denzel Washington on a bus we suspect the worst but do not know what the worst may be.

The puzzles include what did happen in 1991, what is going to happen next, and which are the bad guys. Schreiber is so good that you wish he was not constrained by the thriller plot, Streep is subtle as well as barnstorming; contempt just flickers behind her eyes when she hears democratic platitudes — surely she must be bad?

The surprises surprised me so much that 1 am not sure I have quite mastered the plot yet. It is all excellent fun but, as with the original, not serious.