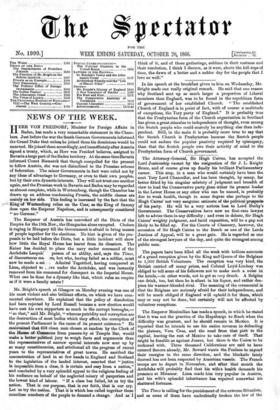 Mr. Bright's speech at Glasgow on Monday evening was one

of his most violent and also brilliant efforts, on which we have com- mented elsewhere. He explained that the policy of dissolution had been rejected by Lord Russell because a new election would have cost his own supporters so much in the corrupt boroughs,— " so that," said Mr. Bright, " whereas putridity and corruption are the destruction of most bodies which they affect, the corruption of the present Parliament is the cause of its present existence." He maintained that 658 clean men chosen at random by the Clerk of the House of Commons from passers-by at Temple Bar, would make a better political jury to weigh facts and arguments than the representatives of narrow special interests now sent up by so many constituencies, and attributed all the progress of recent years to the representatives of great towns. He ascribed the concentration of land in so few hands in England and Scotland to the legislation of the landed interest, asserted that "justice is impossible from a class, it is certain and easy from a nation," and concluded by a very splendid appeal to the religions feeling of his audience on behalf of the neglected misery of pauperism and the lowest kind of labour. "If a class has failed, let us try the nation. That is our purpose, that is our faith, that is our cry. Let us try the nation. That it is which has called together these countless numbers of the people to demand a change. And as I think of it, and of these gatherings, sublime in their vastness and their resolution, I think I discern, as it were, above the hill-tops of time, the dawn of a better and a nobler day for the people that I love so well."