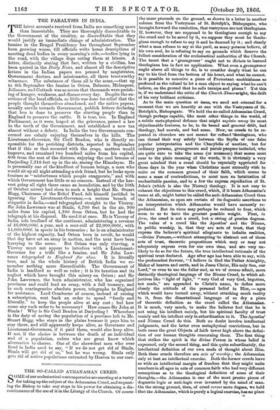 THE PARALYSIS IN INDIA..

rpHE latest accomits received' from India are stnnetlaing more than lamentable. They-ire Iliototighly discreditable to the Government of the COuritry, so discreditable that they would justify in immediate change of administration. The famine in the Bengal Presidency has throughout September been growing we-Ise, till Officas Write home descriptions of meeting deaciliodies in every Morning's ride,ŌĆöbodies lying in the road, with the village dogs eating them at leisute. A letter, distinctly stating that fact, written by 'a civilian, has been quoted in the Daily News, and almost ill the descriptive letters in the Indian papers are penned by magistrates, Government doctors, and missionaries, all three trustworthy witnesses. The inibstance of them all is the same,ŌĆöthat up to 8th September the famine in Orissa, Balasore, Midnapore, Jellasore, and Cuttack was so severe that thousands were perish- ing of hunger, weakness, and disease every day. Despite the ex- ertions of the local officials, so little was done for relief that the people thought themselves abandoned, and the native papers, usually servile towards Government, publish letters declaring that less is done to preserve the starving people than in England to preserve the cattle. It is true, too. In England Parliament, as it were, leaped at the grievance, :poised a law in the teeth of the Government, and established a new tax almost without a debate. In India; the two Governments_con- Oerned are calmly enjoying themselves in the bills. The Lieutenant-Governor, Sir Cecil Beadon, who is directly re- sponsible for the perishing districts, 'reported in September that if this or that occurred with the crops, matters would improve, and remained two hundred miles from his 'capital, 400 from- the seat of the distress, enjoying the cool breezes of Darjeeling 7,218 feet up in the air, among the Himalayas. He is personally one of the kindliest of human beings, a man who would sit up all night attending a sick friend, but he looks upon famines as "misfortunes which people exaggerate," and With 'which Government has little or no concern. Instead of the har- vest going all right there came an inundation, and by the 10th of October misery had risen to such a height that Mr. Stuart Hogg, Chairman of the Relief Fund, felt himself justified in ignoring the Lieutenant-Governor,--a -serious breach of .etiquette in IndiaŌĆöand telegraphed straight to the Viceroy. Sir John Lawrence was at 'Simla, 6,700 feet in the air, 900 miles from his capital, 1,100 from Orissa, but he had the telegraph at his disposal. He used it at once. He is Viceroy of India, sole landlord of the continent, administering a revenue of 46,000,000/. a year, and a rent-roll of 22,000,0001., with 14,000,000/. in specie in his treasuries ; he is an administrator Of the highest capacity, had Orissa been in -re'vOlt, he would that day have set an army in motion, and the next have been hurrying to the scene. But Orissa was only 'starving, a Viceroy must not appear to interfere with a Lieutenant- Governor for a trifle like a famine, and Sir John Law- rence telegraphed to England for alms. It is literally true, and in the whole history of British India 'we re- member nothing more discreditable. The Government Of India is landlord as well as ruler; it is its -taxation-and its neglect which have brought this misery on Orissa ; and Sir John Lawrence, the born administrator, who has organized provinces and could lead an army, with a full treasury, and in such contingencies absolute power, telegraphs to England for assistance. Lord Oranborne of course, instead of raising a subscription, sent back an order to spend freely and liberally, to keep the people alive at any cost ; but how came any such order to be necessary? How comes Sir John at Simla ? Why is Sir Cecil Beadon at Darjeeling ? Wherefore is the duty of saving the population of a province left to Mr. Stuart Hogg, who stays in the plains because it pays him to stay there, and still apparently keeps alive, as Governors and Lieutenant-Governors, if it paid them, would also keep alive. If not, if the choice is between the death of an individual and of a population, rulers who are great know which alternative to choose. One of the shrewdest men who ever lived in India used to say, "If we do not get rid of Simla, Simla will get rid of us," but he was wrong. Simla only gets rid of native populations entrusted by Heaven to our ease.