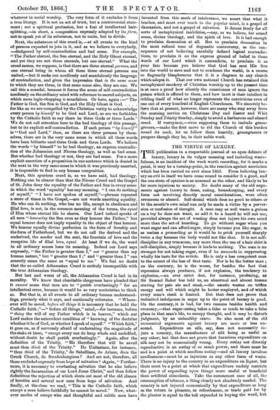 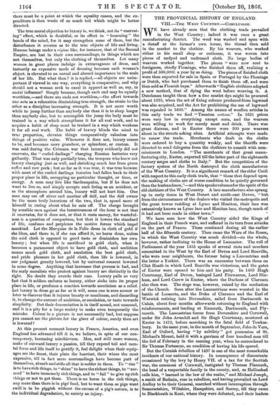 THE VIRTUE OF LUXURY.

THE publication in a respectable journal of an open defence of luxury, luxury in its vulgar meaning and including waste- fulness, is an incident of the week worth recording, for it marks a point, it may be a turning-point, in. the reaction against asceticism which has been carried on ever since 1852. From believing lux- ury an evil in itself we have come round to consider it a good, and the one state of opinion is as unsound as the other, and likely to be far more injurious to society. No doubt many of the old argu- ments against luxury in dress, eating, housekeeping, and every form not involving directly moral considerations, were often erroneous or absurd. Self-denial which does no good to-others or to the ascetic's own mind can only be made a virtue by a perver- sion or confusion of thought. A man may as well waste a guinea on a toy he does not want, as add it to a hoard he will not use, provided always the act of wasting does not injure his own mind more than the act of hoarding. To go without sugar when you want sugar and can afford sugar, simply because you like -sugar, is as useless a proceeding as it would be to prick yourself sharply twice a day because the body would not like that. It is not self- discipline in any true sense, any more than the use of a hair shirt is self-discipline, simply because it leads to nothing. The man is no stronger for not taking sugar, even if he succeeds in suppressing wholly his taste for the article. He is only a less competent man to the extent of the loss of that taste. Nor is he the better man ; on the contrary, he is the worse, for besides the fact that repression always produces, if not explosion, the tendency to explosion,—an over strict diet, for instance, producing, as Sir Samuel Baker has told us, an abnormal and almost insane Orating for pale ale and steak,—the ascetic wastes on trifles energy and will which might be better employed, and of which every man's stock is limited. But that does not prove that unlimited indulgence in sugar up to the point of luxury is good. On the contrary, it is bad, for two reasons besides health and economy,—that sugar-eating takes a false or tends to take a false place in that man's life, to occupy thought, and it may be disturb judgment, by an unhealthy crave. So also most of-the old economical arguments against luxury are more or less un- sound. Expenditure on silk, say, does not necessarily in- jure a country, the manufacture of silk being as useful as any other; but that does not prove that luxurious expenditure on silk-may not be economically wrong. Every outlay not directly reproductive is an outlay of so much power, and there must be and is a point at which needless outlay—and all luxury involves needlessness—must be as injarious as any other form of waste. There is no injury to the country in an expenditure on liquor, but there must be a point at which that expenditure unduly restricts the power of expending upon things more useful or beneficial than artificial stimulants. Take the commonest case of all, the consumption of tobacco, a thing clearlynot absolutely needed. The country is not injured economically by that eXpenditure as long as the return in pleasure, or refreshment, or trade paid for by the planter is equal to the toil expended in buying the weed, but

there must be a point at which the equality ceases, and the ex- penditure is then waste of so much toil which might be better directed.

The true moral objection to luxury is, we think, not its "enervat- ing" effect, which is doubtful, or its effect in " loosening " the bonds of the mind, for it may strengthen some of them, but the disturbance it creates as to the true objects of life and living. Human beings under a regime like, for instance, that of the Second Empire, are lost in their own surroundings, in things which are not themselves, but only the clothing of themselves. Let many women in great places indulge in extravagance of dress, and instantly an expensive mode of dressing becomes each woman's object, is elevated to an unreal and absurd importance in the scale of her life. But what then? it is replied,—all objects are unim- portant if viewed in one way, everything is comparative, and why should not a woman seek to excel in apparel as well as, say, in social influence? Simply because, though each end may be equally worthless,—and there are ends not worthless,—the effort towards one acts as a relaxation diminishing true strength, the strain to the other as a discipline increasing strength. It is not more worth while to jump further than anybody else than it is to sleep longer than anybody else, but to accomplish the jump the body must be trained in a way which strengthens it for all real work, and to acquire a habit of sleep must be trained in a way which weakens it for all real work. The habit of luxury blinds the mind to true proportion, elevates things comparatively valueless into things of positive value. Whenever it does not, luxury ceases to be, and becomes mere grandeur, or splendour, or custom. It was said during the Crimean war that luxury evidently did not enervate, the "curled darlings" charging Russian batteries very gallantly. That was only partially true, the troopers who knew not luxury charging just as well, and shrinking much less from green coffee and raw pork ; but so far as it was true, it was true because with most of the curled darlings luxuries had fallen back to their proper place in life, occupying no particular thought, or time, or energy. A man may live like Sardanapalus, but if he does not want to live so, and simply accepts such living as an accident, or as the atmosphere around him, luxury will not hurt him. One man may eat off silver and another off deli, and the deli owner be the more truly luxurious of the two, that is, spend more of himself in caring about what he eats off. The charge brought by sensible men against the luxuriousness of the hour is not that it enervates, for it does not, or that it costs money, for wasteful- ness is a question of comparison, but that it lowers the standard of life, confuses and perplexes the motive forces which impel mankind. Let the Marquise de la Folie dress in cloth of gold if she likes, and there is, if she can afford it, no harm done, unless the said cloth is opposed to good taste or diminishes her own beauty ; but when life is sacrificed to gold cloth, when it becomes a paramount object to have gold cloth, and ambition means much gold cloth, and emulation the best gold cloth, and pride pleasure in her gold cloth, then life is lowered, in our judgment greatly lowered, but by universal consent lowered in some degree. Anything that increases that process is bad, and the surly moralists who protest against luxury are distinctly in the right. No doubt they overdo their case. Luxury palls so very fast that it seldom endures as luxury, either sinks into its proper place in life, or produces a reaction towards asceticism as a relief. Let luxury in dress go as far as it will, some one is sure sooner or later to discover that it injures beauty or manliness, and discarding it, to change the current of ambition, or emulation, or taste towards simplicity. But their denunciation is in itself sound, not unsound, and it is a pity for a large society to make even temporarily the mistake. Colour in a picture is not necessarily bad, but suppose you cannot see the picture for the glare of colour, surely then art is lowered?

At this present moment luxury in France, America, and even England has advanced till it is, we believe, in spite of our con- temporary, becoming mischievous. Men, and still more women, make of outward luxury a passion, till they expend toil and men- tal force and life itself to gratify it, feel delight when their equip- ages are the finest, their plate the heaviest, their wines the most expensive, till in fact mere surroundings have become part of themselves, absorb and stifle all that is nobler in them. To " rise " is to have rich things, to "shine" to have the richest things, to " suc- ceed " to have immensely rich things, and to " fail " to give up rich things or not to get them. There is no harm in the rich things, any more than there is in pigs' food, but to want them as pigs want swill is to be piggish without the excuse of a pig's nature, is to the individual degradation, to society an injury.