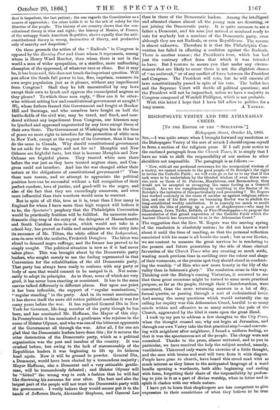 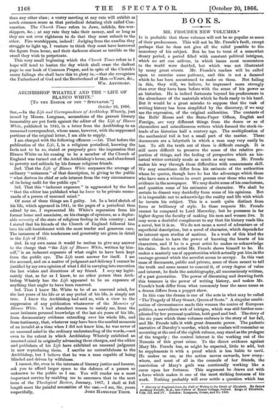 [To THE EDITOR OF THE "SPECTATOR."] Bishopsgate Street, October 15, 1866. Srn,—I was quite aware when I brought forward my resolution at the Bishopsgate Vestry of the sort of attack I should expose myself to from a section of the religious press. If I call your notice to the enclosed paragraph from the Church Times, it is simply that I have no wish to shift the responsibility of our motion to other shoulders not responsible. The paragraph is as follows :— "Now, with all our profound reverence for the cecumenieal wisdom of a vestry, we cannot concede to the good people of St. Botolph's the right to revise the Catholic Faith ; we will even go so far as to say that if the task were to be undertaken by the blended wisdom of even three vest- ries such as those of St. Pancras, Marylebone, and Bermondsey, they would not be accepted as occupying the same footing as a General Council. Are we too complimentary in ascribing to the Rector of St. Botolph's the initiative of this particularly cool proceeding ? Mr. Rogers has worked zealously in the cause of secular as against religious educa- tion, and one of his first steps on becoming Rector was to abolish the long-established weekly celebration. It is scarcely too mach to oredit him with the idea of putting up a posse of shopkeepers—who may be Churchmen, Jews, Turks, Infidels, or Fire-Worshippers—to propose the emasculation of that grand exposition of the Catholic Faith which the Ancient Church has bequeathed to us in the Athanasian Creed."

The suggestion that the Rev. W. Rogers was the moving spring of the resolution is absolutely untrue ; he did not know a word about it until the time of meeting, so that the personal reflection associated with his name is all beside the mark ; but as our Rector, we are content to measure the great services he is rendering to the present and future generation by the side of those clerical favourites of the Church Times who are creating so much strife, wasting much precious time in cavilling over the colour and shape of their vestments, or the precise spot they should stand in conduct- ing the worship "of Him who saw more beauty in the lily of the valley than in Solomon's glory." The resolution arose in this way. Thinking °ye? the Bishop's coming Visitation, it occurred to me that these great occasions might be turned to some more.practical purpose, so far as the people, through their Churchwardens, were concerned, than the mere returning answers to a lot of dry, formal queries, or passing through a sort of ecclesiastical levge. And among the many questions which would naturally rise up calling for inquiry was this Athanasian Creed, hurtful to so many minds within and offensive to so many outside the pale of the Church, aggravated by the libel it casts upon the great Head.

I took up my pen to address a few thoughts to the City Press, when the thought crossed me, why not begin at Jerusalem, and through our own Vestry take the first practical step ?—and convers- ing with neighbour after neighbour, I found a uniform feeling, so that it was the spontaneous act of the people. The clergy were not consulted. Thanks to the press, almost universal, and to you in particular, we have received the help the subject needed, namely, ventilation. This creed only wants the exercise of a little thought, and the men with brains and soul will turn from it with disgust. People have gone to church, have heard this creed read with as much interest as they listen to the antiquated language of a ward beadle opening a wardmote, both alike beginning and ending with form, forgetting their share of the responsibility by profess- ing to join in it as a part of divine worship, when in letter and in spirit it clashes with our whole nature.

I have yet to learn that shopkeepers are less competent to give expression to their convictions of what they believe to be true than any other class ; a vestry meeting at any rate will exhibit as much common sense as that periodical debating club called Con- vocation. The Church Times refers to Jews, infidels, fire-wor- shippers, &c. ; at any rate they take their money, and so long as they are not over righteous to do that they must submit to the other. Fire-worshippers, indeed ! Judging from the candles they struggle to light up, I venture to think they must have borrowed the figure from home, and their darkness almost as terrible as the creed they wish to perpetuate.

This very small beginning which the Church Times refers to I hope will tend to hasten the day which shall erase the darkest page in our book of Common Prayer, and in spite of the Church's many failings she shall have this to glory in,—that she recognizes -the Fatherhood of God and the Brotherhood of Men.—Yours, &c., WM. ARPTHORF.