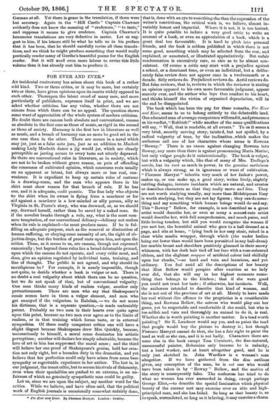 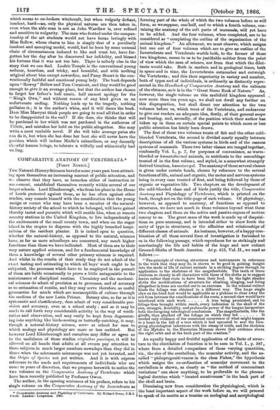 FOR EVER AND EVER.*

A/sr incideetal controversy has arisen about this book of a rather odd kind. Two or three critics, or it may be more, but certainly tato or three, have given opinions upon its merits widely opposed to each other. Thereupon the latent creed of many men, and more particularly of publishers, expresses itself in print, and we are Asked whether criticism has any• value, whether there are not canons from which these can be no appeal. The question shows .some want of appreciatien of the whble system of modern criticism. No doubt there are Canons both absolute and conventional, canons As absolute in the first case as those of music, as rigid in the second as those of society. Harmony is the first law ih literature as well as music, and a breach of harmony can no more be good art in the One case than in the other. There are scenes in a novel which May jar, just as a false note jars, just as an addition to Macbeth making Lady Macbeth dance a jig wOuld jar, Which are clearly perceptible as jarring scenes to every Mate not utterly depraved. So there are conventional rules in literature, as in society, which are not to be broken without grave reason, on pain of offending the consensus of Cultivated opinion, which consensus rests usually on an apparent or latent, but always more or less real, con- venience. It is expedient to keep up certain rules of costume in a drawing-room, and the man who appears there in his shirt must show reason for that breach of rule. If he has one, and it is adequate, cadit quxstio. The fine lady who objects to the shirt when its owner is flying from a murderer or for aid against a murderer is a low-minded or silly person, silly as Virginia in St. Pierre's story, who was drowned, or, as we should nay, drowned herself, rather than be saved by a naked man. So if the novelist breaks through a rule, say, what is the most com- mon temptation, of our conventional delicacy—delicacy not useless when its rule is explained—he must produce cause. If he is ful- filling an adequate purpose, such as the removal or diminution of human suffering, or obeying some necessity of art, the right of ob- jection drops, but the burden of proof rests upon him, not upon the critic's. These, as it seems to us, are canons, though not expressed canonically ; but beyond these rules lies a broad debateable ground, upon which the canons do not operate, and every critic must, and does, give an opinion regulated by individual taste, training, and line of thought. The pains is not agreed, and why should its mouthpieces be? For example, it is nearly impossible, though not quite, to decide whether a book is vulgar or not. There is no doubt a real vulgarity about which there can be no question, but We do not speak of that, but of conventional vulgarity. One man thinks many kinds of realism vulgar, another only pretentiousness. There are men who say that Shakespeare's comic scenes have in them a vulgar element, and men who get annoyed if the vulgarism in Rabelais, — we do not mean his dirtiness, that is a separate question,—is made undeniably patent. Probably no two men in their hearts ever quite agree upon this point, because no two men ever agree as to the limits of realism, or in that training which forms taste, or in external sympathies. Of three really competent critics one will have a slight dis. gust because Shakespeare drew Mrs. Quickly, because, unconsciously to himself, a moral sense dominates his artistic perceptions; another will declare her simply admirable, because the love of art hi him has suppressed the moral sense; and the third will believe her one proof of Shakespeare's genius, hold her crea- tion not only right, but a bounden duty in the dramatist, and yet believe that her perfection could only have arisen from some base sympathy or regrettable experience in her author. The last is, in our judgment, the truest critic, but to accuse his rivals of dishonesty, even when their specialities are pushed to an extreme, is an un- fairness of which no genuinely sympathetic Man could be guilty.

Let us, since we are upon the subject, say another word for the critics. While we believe, and have often said, that the political work of English journals is occasionally somewhat unfairly done,

* For Eter and Ever. By Florence Matt; at. London : Bentley.

thatis, done wkth an eye to soniething else than the eipreision of the writeets tonvietions, the Critical werk is, we believessilmost in- variably honest and ithpartial. Where it is not, it is too lenient. It is quite poasible to induce a very good critic to write an account of a book, or even an apprediation of a book, which is a great deal too favourable. It is hard to pitch into personal friends, and the book is seldom published in which there is not some good, something which may be selected front the rest, and explained, or annotated, or illustrated appreciatively. Rut unfair cmidenination is excessively rare, so rare as to be alniost non- existent. Of comse a critic may start with a prejudice against a school, or a dominant tone, Or even an individual, but a delibe- rately false retie* does not appear once hi a twelvemonth or a decade. Silly reviews do. Prejudiced revietra do. Acrid reviews do. But false reviews, that is, revietas in which the reviewer is stating an opinion opposed to his own more favourable judgment, appear scarcely ever, and the author who lays that comfort to his heart, and thinks himself the victim of organized depreciation, will in the end be disappointed.

The book -which hits' been th'e peg foe these remarks, For Ever and Ever, -seems to us te belong entirely to the debateable land. One educated man of average competence Will read it, and pronounce as his verdict, "Rubbish!" while another of the same qualifications will say, "Well, that is readable, at all events." To us it seems a very brisk, smartly moving story, taints d, but not spoiled, by a radical vulgarity of tone, by the inclination .which makes the authoress call one of her characters Whose name is Rowena "Rowny." There is no canon against changing Rowena into Rowny, any more than there is against pronouncing Maria Mariar, but only vulgar people do it unintentionally. The book is vulgar, but with a vulgarity which, like that of many of Mrs. 'rrollope's novels, has its root as much in power, in the genuine earthiness which is always strong, as in ignorance or want of cultivation. "Florence Marryat " inherits very much of her father's power, makes up, or can make up, a good story, writes lively, alightly rattling dialogue, invents incidents which are natural, and creates or describes characters so that they really move and live. They are not worth studying usually, any more than Midshipman Easy is worth studying, but they are not lay figures ; they made some- thing and say something which human beings would do and say. This " Rowny " Bellew, .for example, is not described as a great artist would describe her, or even as many a second-rate artist would describe her, with full comprehension, and much pains, and little loving touches, but still you would recognize the woman if you met her, the beautiful animal who goes to a ball dressed as a page, and sits at home, "lying back in her easy chair, robed in a clear white muslin wrapper, through which (the under bodice being cut lower than would have been permitted in any ball-dress) her marble breast and shoulders positively gleamed in their snowy whiteness, with her dark hair tied off her face with a rose-coloured ribbon, and the slightest soupcon of artificial colour laid skilfully upon her cheeks,"—so hard and vain and luxurious, and yet ordinary. You feel amid all the descriptions of her beauty that Miss Bellew would perspire after exertion as no lady ever did, that she will say in her highest moments Kane- thing that belongs to the kitchen; that if she were good you could not trust her taste ; if otherwise, her instincts. Well, the authoress intended to describe that kind of woman, and she is not out of the province of art at all. Merely to have made her real without dire offence to the proprieties is a considerable thing, and Rowena Bellew, the actress who would play out her game, yet be respectable and comfortable if she could, but who is too selfish and vain and thoroughly an animal to do it, is real. Whether she is worth painting is another matter. Is a toad worth painting? Sir E. Lartdseer would say yes, and so paint the toad that people would buy the picture to destroy it ; but though Florence Marryat cannot do that, she has a fair right to paint the toad as well as she can, and it is not badly. Characters there are none else in the book except Tom Cornicott, the fine-natured, unsuccessful painter, Bohemian only because he is unlucky, but a hard worker, and at heart altogether good, and he is only just sketched in. John Wardlaw is a woman's man altogether. If we have gathered from the dim outlines given, any conception of the man, he is not one who would have been taken in by " Rowny " Bellew, and the motive of the story is consequently false. The authoress has tried to do what no woman has ever succeeded in doing, except perhaps George Eliot,—to describe the special fascination which physical beauty of the coarser sort may exercise over an able and high- principled man, and she has failed. So long as that beauty is, so to speak, surrendered, so long as it is loving, it may exercise a charm

which seems to on-lookers witchcraft, but when vulgarly defiant, insolent, hard---so, only the physical natures are then taken in, even when the able man is not as John Warcllaw is, over refined and sensitive to vulgarity. The man who fretted under the compan- ionship of the art students would not have borne lovingly with Miss Bellew, whose charm to him is simply that of a peculiarly insolent and annoying model, would, had he been by some unusual chain of circumstances induced to like and trust her, have for- gotten her the day after he discovered her infidelity, and blessed his fortune that it was not too late. There is nobody else in the story that we can find. Leofric Temple is the conventional young seducer, heartless, and tricky, and beautiful, and with nothing original about him except cowardice, and Pussy Stuart is the con- ventionally faithful and emotional young lady. The book depends upon "Rowny" Bellew and Tom Cornicott, and they would be good enough to give it au average place, but that the author has chosen to forget her father's half comic, half earnest apology for the "King's Own," and without reason of any kind given us an unfortunate ending. Nothing leads up to the tragedy, nothing palliates it ; it is the author's whim, and it will damn the book. Does Miss Marryat think people are going to read all that in order to be disappointed in the end? If she does, she thinks that will be pardoned in her which was not pardoned in the authoress of Villette, and mistakes her hold on the public altogether. She may write a most readable novel. If she will take average pains she can do it, but when she has done her best she will never have the pasitiou which will induce Mudie's subscribers, or any decently chexful human beings, to tolerate a Wilfully and whimsically bad ending.