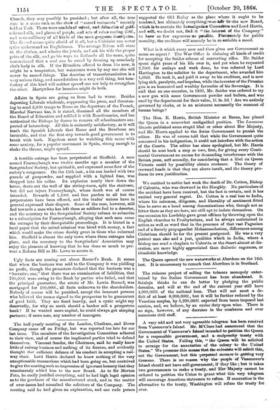 What is it which every now and then gives our

Government so mean an aspect? The Was Office is claiming all kinds of credit for accepting the Snider scheme of converting rifles. Mr. Snider spent eight years of his life over it, and yet when he requested 2,700/. for outlays and work done, he was referred by Lord Harting,ton to the solicitor to the department, who awarded him 1,000/. He took it, and paid it away to his creditors, and is now lying sick, paralytic, and hopeless, while the inventor of the Prussian gun is an honoured and wealthy favourite of his Sovereign. It is said that on one occasion, in 1859, Mr. Snider was ordered to try a new gun with some Government powder and bullets, and was sued by the department for their value, 1/. 2s. 9d. ! Are we entirely governed by clerks, or is an aristocrat necessarily the meanest of human beings?