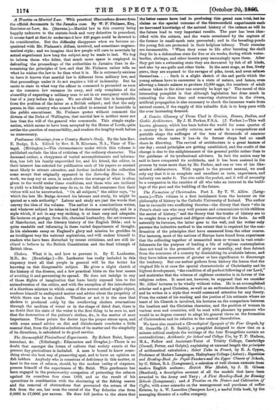 Posthumous Gleaming& from a Country Rector's Study. By the late

Rev. E. Budge, B.A. Edited by Rev. R. B. Kinsman, MA., Vicar of Tin- lagel. (Rivington.)—The circumstances under which this volume is published exclude the idea of criticism of the ordinary character. The deceased author, a clergyman of varied accomplishments and informa- tion, has left his family unprovided for, and his friend, the editor, in their interest has selected for publication such of his papers as seemed most likely to attract attention, and further included in the collection some essays that originally appeared in the Saturday Review. The work, we may say at once, is much above the average of what is often given to the world under these conditions, and those who are inclined to yield to a. kindly impulse may do so, in the full assurance that their virtue will not be unrewarded. " On all subjects," the editor says, "to which the late Mr. Budge devoted his labours and study, he might be quoted as a safe. authority." Labour and. study are just the words that convey the idea of the volume. The author is a conscientious writer, and whatever subject he taken in hand he discusses carefully, and in a style which, if not ia-any way atriking, is at least easy and adequate. He lectures on geology, farm We, chemical husbandry, the art treasures of Manchester, and the literary history of the English Bible ; and is quite readable and informing in these varied departments of thought. In his elaborate way on England's glory and mission he gratifies in an intelligent way the national aspirations, and will endear himself to readers who have been disturbed by recent criticisms, and are still in- clined to believe in the British Constitution and the final triumph of British ideas.