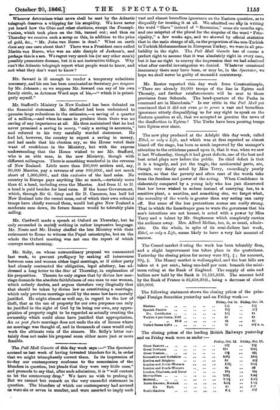 Mr. Stafford ' s Ministry in New Zealand has been defeated on

the financial statement. Mr. Stafford had been understood to - promise large reductions in the estimates,—a saving of a quarter of a million,—and when he came to produce them there was no saving of any importance at all. He then maintained that he had never promised a saving in money, "only a saving in accounts," and referred to his very carefully worded statement. He had led, however, the country to expect a saving in money, and had made that his election cry, so the House voted their want of confidence in the Ministry, but with the express amderstanding that the House wished to see Mr. Stafford, who is an able man, in the new Ministry, though with -different colleagues. There is something wonderful in the revenue -of New Zealand. Little more than 200,000 settlers and, say, 80,000 Maories, pay a revenue of over 900,0001., and not much .short of 1,000,0001., and this exclusive of the land sales. No -country in Europe pays anything like so much,---certainly more than 4/. a head, including even the Maories. And from 1/. to 2/. -a head is paid besides for local rates. If the home Government, which, through Sir G. Grey and Sir D. Cameron, has half led New Zealand into the recent mess, out of which their own colonial troops-have chiefly rescued them, would but give New Zealand a moderate sum down, its future finance would be tolerably plain