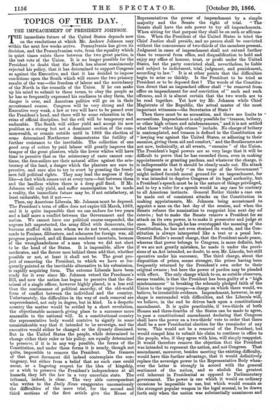 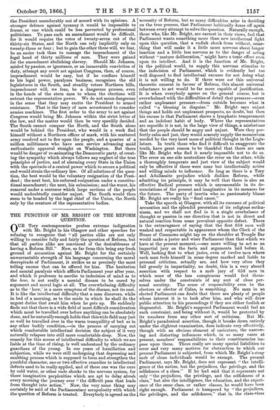 THE IMPEACHMENT OF PRESIDENT JOHNSON.

THE immediate future of the United States depends now on the resolutions at which Mr. Andrew Johnson may within the next few weeks arrive. Pennsylvania has given its decision, and the Pennsylvanian vote, from the equality which in quiet times exists there between the two great parties, is the test vote of the Union. It is no longer possible for the President to doubt that the North has almost unanimously rejected his policy, that it has determined to support Congress as against the Executive, and that it has decided to impose conditions upon the South which will ensure the two primary results of the war—the freedom of labour and the ascendancy of the North in the councils of the Union. If he can make up his mind to submit to these terms, to obey the people as he has so frequently expressed his readiness to obey them, the danger is over, and American politics will go on in their accustomed course. Congress will be very strong and the Executive very weak, a law or two will have to be passed over the President's head, and there will be some relaxation in the reins of official discipline, but the evil will be temporary and endurable. The South will either yield and accept its new position as a strong but not a dominant section of the com- monwealth, or remain outside until in 1868 the election of some determined Northerner demonstrates the futility of further resistance to the inevitable. The collection of one good crop of cotton by paid labour will greatly improve the temper of the great planters, while the lower whites will have time to perceive that as the aristocracy of caste cannot con- tinue, the free-soilers are their natural allies against the aris- tocracy of the land, a danger which the planters are sure to perceive, and sure also to try to avert by granting the freed- men full political rights. They may lead the negroes if they like—a fact which comes out at every turn—but between them and the landless whites there is a deep gulf fixed. If Mr. Johnson will only yield, and suffer emancipation to be made a reality, the immediate future may be, if not satisfactory, at least endurable, but if not—