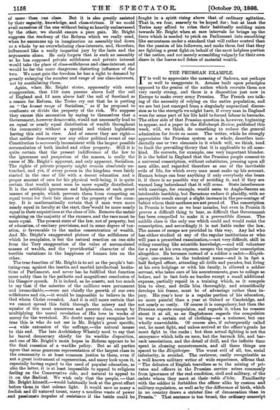 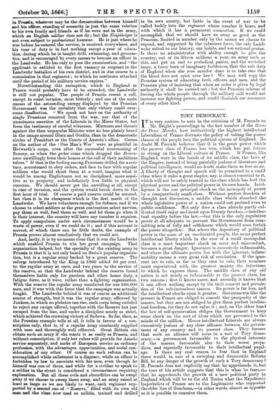 TT is well to appreciate the meaning of Sadowa, not perhaps .1 so well to exaggerate it. Armies built upon principles opposed to the genius of the nation which recruits them are- very rarely strong, and there is a disposition just now in Europe to make every army Prussian. The French are talk- ing of the necessity of relying on the entire population, and we are but just emerged from a singularly unpractical discus- sion ante the strength we might have, if every man in England were for some part of his life held to forced labour in barracks. The other side of that Prussian question is, however, beginning to appear, and a paper in the Edinburgh Review, published this. week, will, we think, do something to reduce the general admiration for levees en masse. The writer, while he strongly appreciates the Prussian system as a whole, describes inci- dentally one or two elements in it which will, we think, tend to limit the prevailing theory that it is applicable to all man- kind. He corrects, for example, one very important blunder. It is the belief in England that the Prussian people consent to a universal conscription, without substitutes, pressing upon all men alike, and regarded therefore as one of the inevitable- evils of life, for which every man must make up his account. Human beings can bear anything if only everybody else bears it, if there is no possible way of avoiding it, and if they are warned long beforehand that it will come. State interference- with marriage, for example, would seem to Anglo-Saxons an- intolerable hardship, but Bavarians endure it placidly, with no perceptible result except a slight increase in the per-centage of babies whom their mothers are not proud of. The conscription in Prussia is borne as we bear measles, but even in Prussia it- proves a difficult thing to bear, so difficult that Government has been compelled to make it a preventible disease. The- middle class is the only one which could and would resist the conscription, and accordingly it is not liable under the law. The means of escape are provided in this way. Any lad who. has either studied at any of the regular institutions or who. will pass a prescribed examination,--not very difficult, skill in riding counting like scientific knowledge,—and will volunteer for a year at his own expense, escapes the regular conscription altogether. He becomes instead of a soldier a cadet—Einjah- riger, one-yearer, is the tenhnieal name—and is in fact a half fledged officer, attending all drills and parades, but,fiving- at his own lodgings or with his family, is allowed a soldier- servant, who takes care of his accoutrements, goes to college as before, and in fact feels no burden except a small additional expense, partially repaid in a training which, as it compels- him to obey, and drills him thoroughly, and scientifically develops his frame, must be of advantage rather than in- jury. His year's tour is a regular portion of his education, no more painful than a year at Oxford or Cambridge, and not nearly so costly. Of course it is compulsory, but then the Prussian expects compulsion, and regards it, when he reasons- about it at all, as an Englishman regards the compulsion to wear a certain out of clothing—as a nuisance, but one wholly unavoidable. Of course also, if subsequently called out, he must fight, and unless arrived at the officer's grade he must fight in the ranks ; but then actual fighting is not the annoyance which tells on men, but the barrack life, and bar- rack, associations, and the detail of drill, and the infinite time- spent in cleaning accoutrements, and all these things are spared to the Einjahriger. The worst evil of all, too, social inferiority, is avoided. The reviewer, easily recognizable as. a well known military writer of wide experience, affirms that "The delusion of English travellers as to the mixing of pri- vates and officers in the Prussian service arises commonly from ignorance of the reaL condition, civil and military, of the cadets whom they meet at their table d'hôte. Familiarity with the soldier is forbidden the officer alike by custom and military regulation, as well as by the difference of birth, which in Prussia,- whatever may be the demarcation between himself and his officer, standing of necessity in just the same relation to his own family-and friends as if he were not in the army, which an English soldier does not do ; but the Einjahriger is not even subject to professional hauteur. He is just where he was before he entered the service, is received everywhere, and his tour of duty is in fact nothing except a year of educa- tion, during which he is taught drill, swimming, and gymnas- tics, and is encouraged by every means to become an officer in the Landwehr. He has only to pass the examination, and "the applicant is entitled to the first vacancy as sergeant in the Landwehr battalion of his own district, and in due course to a commission in that regiment ; to which he continues attached until the period of his military service expires."

Notwithstanding this exemption, which in England or France would probably have to be extended, the Landwehr is still not popular. The people of Prussia resent a call, except to resist invasion, most bitterly ; and one of the main causes of the astounding energy displayed by the Prussian Government was the certainty that only victory could over- come disaffection. "We speak not here on the authority of single Prussians removed from the war, nor that of the unanimous assertion of the Liberals in the Minor States, but from the testimony of careful witnesses. Murmurs and threat§ against the then unpopular Minister were no less plainly heard in the camps around Glatz and Gorlitz, than in the democratic circles of Frankfurt or the Courts of Austria's allies. Curses on the author of the One Man's War' were as plentiful in Herwarth's corps, even after the successful overrunning of Saxony, as when the prder came which dragged the Reserv- isten unwillingly from their homes at the call of their ambitious rulers." If that is the feeling among Prussians drilled for a cen- tury, accustomed to obey orders, and face to face with regular soldiers who would shoot them at a word, imagine what it would be among Englishmen not so disciplined, more sensi- tive as to property, and indefinitely less liable to physical coercion. We should never get the unwilling at all, except in case of invasion, and the system would break down in the first hour of trial. Of course a paid reserve could be secured, but then it is its cheapness which is the first merit of the Landwehr. We have volunteers enough for defence, and if we choose to select soldiers as the great contractors select navvies, pay them as well, feed them as well, and let them go when it is their interest, the country will have any number it requires. To apply compulsion under such circumstances would be a waste of power, even if we could do it ; and if this account is correct, of which there can be little doubt, the example of Prussia proves almost conclusively that we could not.

And, lastly, it is by no means clear that it was the Landwehr :which enabled Prussia to win her great campaign. That organization helped, but the specialty of the existing army in Prussia is that it is not only based on Stein's popular organiza- tion, but is a regular army backed by a great reserve. The refonn introduced by the Bing in 1860 added 50 per cent. to the regular army at once, and two years to the service of the reserve, so that the Landwehr behind the reserve found themselves liable only for garrison and other home duty, a fatigue force, as it were, rather than a fighting organization. With the reserve the regular army numbered for war 380,000 men, and it was with this force that the campaign was actually fought. The Landwehr behind it was of course an additional source of strength, but it was the regular army, officered by Junkers, in which no plebeian can rise, each corps being entitled to reject any ensign offered, together with the Reserve but just escaped from the line, and under a discipline nearly as strict, which achieved the crowning victory of Sa,dowa. So far, then, as the Prussian example tells at all, it tells in favour of a con- scription only, that is, of a regular army constantly supplied with men and thoroughly well officered. Great Britain can obtain such an army if she wants it as easily as Prussia, and without conscription, if only her rulers will provide for Asiatic service separately, and make of European service an ordinary profession, with the advantages, opportunities, and social con- sideration of any other. Of course no such reform can be accomplished while enlistment is a disgrace, while an officer is forbidden by law to associate with his men, even though he himself was one of them, and while for a civilian to speak to a soldier in the street is considered a circumstance requiring explanation. But all these evils and absurdities can be swept away if we choose to sweep them away, and an army raised at least as large as we are likely to want, each regiment sup- ported by a second one of "Reserve," filled with its own old men and the class now used as militia, trained and drilled in its own county, but liable in the event of war to be called bodily into the regiment whose number it bears, and with which it has a permanent connection. If we could accomplish that we should have an army as good as the Prussian, limited in number only by the money we choose to expend, and supported by the volunteer force, the only Land- wehr suited to our history, our habits, and our national genius. Is there no administrator with ability enough to give the country, out of its fifteen millions a year, an army such as this, and put an end to periodical panics, and the wretched fancy, a fancy born of imaginary feebleness, that the sole duty of England when she sees murder done is to take care that the blood does not spirt over her ? We may well copy the Prussian system of educating both officers and men, and the Prussian plan of insisting that when an order is given by legal authority it shall be carried out ; but the Prussian scheme of forcing the whole people through the military mill would not increase our fighting power, and would diminish our resources of every other kind.