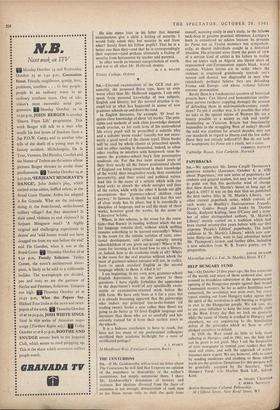 SIR,—If Mr. Goldsworthy will re-read my letter about The Centurions he will find that I express no opinion of the soundness or desirability of the author's contentions, but simply summarise them. I share Mr. Goldsworthy's detestation of tyranny and violence. But idealism divorced from the facts of existence is not enough; denunciation of such men as les Paras serves only to shift. the guilt from

oneself, accusing cosily in one's study, to the fellows neck-deep in genuine practical dilemmas. Lartdguy's book is considered so odious because he presents les Paras not as Fascist monsters but sympatheti- cally, as decent individuals caught in a historical situation. His principal error (from the point of view of a certain kind of critic) is his failure to realise that on topics such as Algeria any theme short of impassioned anti-Europeanism equals black, brutal reaction. Violent heroes are in order where the violence is employed gratuitously towards one's nearest and dearest, but disgraceful in men who (mistakenly perhaps) believe they are defending France and Europe. and whose violence follows extreme provocation.

Surely there is a fundamental question of historical process here: Can liberal and humanitarian institu- tions survive (without crippling damage) the process of defending them in mid-twentieth-century condi- tions? To put it another way, is it possible that what we take as the special values of Western life are a luxury possible to a society as rich and world- dominating as Victorian Britain but functionally impossible to the struggling West of today? Should the cold war continue for several decades, may not our standards in regard to liberty and the law suffer (have they not already suffered?)? But do not look for scapegoats: les Paras are a result, not a cause.