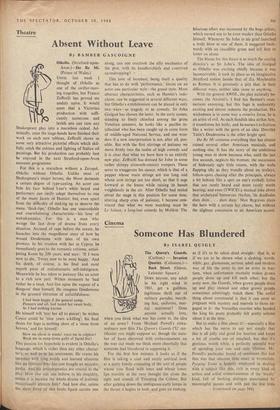 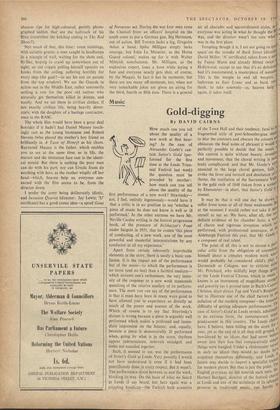 By ISABEL QUIGLY The Queen's Guards. (Carlton.) — Invasion Quartet. (Coliseum.)— Back Street. (Odeon, Leicester Square.) For the first few minutes it looks as if the film is taking a cool and surely satirical look at a nutty family consisting of the sort of people whose eyes flood with tears and whose lower lips tremble at the very thought (let alone the sight and sound) of Trooping the Colour. But after gulping down the ambiguous early lumps in the throat it begins to look, and goes on looking, as if it's to be taken dead straight: that is, as if we are to be shown what a dashing, worth- while, gay, glamorous, serious, adult and modern way of life the army is; not an army in war- time, when unfortunate necessity makes grown people dress up and kill each other, but the army now, the Guards, when grown people dress up and play instead and other grown people sometimes admiringly watch them. The awful thing about ceremonial is that it can seem so pregnant with mystery and marvels to those en- gaged in it: the Versailles courtier who handed the king his pants probably felt pretty solemn about it at the time.

But to make a film about id—especially a film which has the nerve to say not simply that this is all jolly and good for tourism and keeps a lot of youths out of mischief, but that it's glorious, worth while, a perfectly splendid way of spending your one and only lifetime. Mr. Powell's particular brand of sentiment (his last film was that obscene little essay in voyeurism, Peeping Tom) is, happily employed in dealing with a subject like this, rich in every kind of artless and artful embarrassment of the 'manly' kind, full of barking dialogue punctuated by meaningful pauses and with just the few little

(continued on page 544) chances ripe for high-coloured, prettily photo- graphed sadism that are the hallmark of his films (remember the ketchup ending to The Red Shoes?).

Npt much of that, this time: some stabbings, with suitable grunts; a man caught in headlamps in a triangle of wall, waiting for the shots and, fly-like, hoping to crawl up somewhere out of sight; an old cripple pulling himself upstairs on hooks from the ceiling, suffering horribly for every step (the goal?—to see his son on parade from the top window). We see the Guards in action out in the Middle East, rather summarily settling a row for the poor old natives who naturally get themselves killed in dozens, and nastily. And we see them in civilian clothes, if not exactly civilian life, being heavily demo- cratic with the daughter of a haulage contractor, once in the RASC.

The whole film would have been a great deal horrider if it hadn't had Daniel Massey touch- ingly cast as the young lieutenant and Robert Stevens (who played the mother's boy friend so brilliantly in A Taste of Honey) as his chum. Raymond Massey is the father, which enables you to see at the same time, as in life, the mature and the immature face cast in the identi- cal mould. But there is nothing the poor man can do with his part; nor can Ursula leans do anything with hers, as the mother wispily off her head—which, heaven help us, everyone con- nected with the film seems to be, from the director down.

I prefer the army being deliberately idiotic, and Invasion Quartet (director: Jay Lewis; 'U' certificate) has a good comic idea—a spoof Guns of Navarone act. During the war four men cross the Channel from an officers' hospital on the south coast to put a German gun, Big Hermann, out of action. Bill Travers lacks a leg, Gregoire Asian a hand, Spike Milligan simply lacks courage, but John Le Mesurier, as the Home Guard colonel, makes up for it with Walter Mittyish nonchalance. Mr. Milligan, as the explosives expert, loses a boot while laying a fuse and everyone nearly gets shot, of course, by the Maquis. In fact it has its moments; but there are too many off-moments, too, when not very remarkable jokes are given an airing for the third, fourth or fifth time. There is a general air of charades and uncoordinated styles, as everyone was acting in what he thought the was, and the director wasn't too sure what was in the first place.

Tempting though it is, I am not going to.spc space' on the remake of Back Street (director David Miller; 'A' certificate), taken from a a0V by Fanny Hurst and already filmed twice Hollywood; except to say that it's so delicious bad it's monumental, a masterpiece of nonseos This is the weepie to end all weenies, ludicrous as East Lynne and as hard, Yorr think, to take solemnly—as, heaven help again, it takes itself.