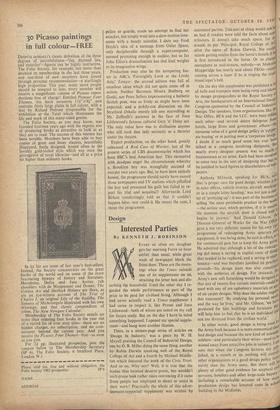 By KENNETH .1. ROBINSON EVERY so often my daughter gets her morning Farex an hour earlier than usual, while great wads of newspaper block the front door. These are the morn- ings when the Times unloads one of its supplements on us, straining the letter box and dis- turbing the household. Until the other day I re- garded the whole performance as part of the price to be paid for civilised living. Although I had never actually read a Times supplement I had come to respect it, like Proust and Joan Littlewood—both of whom are noted on my cuff for future study. But on the day I have 'in mind something happened. I opened my special supple- ment—and bang went another illusion.

There, in a sixteen-page series of articles on `Design In Industry,' was a piece by W. H. Mayall praising the Council of Industrial Design, one by 0. B. Miller dding the same thing, another by Robin Darwin speaking well of the Royal College of Art and a fourth by Michael Middle- ton which featured the work of the Civic Trust. And so on. Why not? Well, it is true that the bodies thus boosted deserve praise, but wouldn't such praise look rather more convincing if it came from people not employed to direct or assist in their work? Practically the whole of this adver- tisement-supported supplement was written by SPECTATOR: OCTOBER 20, interested parties. This sort of thing would tic so bad if readers were told the facts about i tributors. It doesn't take much space, for stance, to put 'Principal, Royal College of after the name of Robin Darwin. No rei minds getting stories from the horse's mouth is first introduced to the horse. Or to chz metaphors in mid-stream, nobody—as Malc Muggeridge has nearly said about PROs—n, coming across a leper if he is ringing the tr tional leper's bell.

On the day this supplement was published a 101 of bells and trumpets were being rung and blowe by design propagandists at the Royal Society ef Arts, the headquarters of an International-Des/go Congress sponsored by the Council of Industrial Design. The speakers, from organisations like the War Office, BEA and the LCC, were busy telling each other—and several dozen delegates from hotels, large firms and government offices–Abe immense value of a good design policy in `cor pot ' ate buying' or in putting over a' 'corporate ge, I doubt if so much good sense has ever been talked at a congress involving designers. 00i nearly every designer present was as much' 3 businessman as an artist. Each had been involved in some way in the sort of designing that has,io be justified in hard figures to shareholders or rate' payers. Anthony Milward, speaking for BEA, said that 'a proper care for good design, whether.it in sales offices, vehicle liveries, aircraft markings or in a simple letter heading,' was not just a 031' ter of 'prettying up': it was part of the business selling 'the most perishable product in the Weld —the airline seat, which perishes, if it is unsold' the moment the aircraft door is closed and it begins its journey.' And 'Donald Gibson. the Director-General of Works for the War Of je°: gave a not very different reason for his own vas; programme of redesigning Army quarters a°, .11 equipment. It was being done, he said in effect, not for commercial gain but to keep the Army Ong He admitted that although a lot of the redesign. ing did mean a saving in capital costs of0, .- 05 that needed to be replaced, and a saving in ,,,"43b/, tenance—and was therefore justified on prad lee; grounds—his design team was also concerned with the testhetics of design. For instance/ the Army's new soft furnishing would be designed SO that any of twenty-five curtain materials could be, used with any of ten upholstery materials or allY of six carpet designs. Why does the soldier require this treatment? `By studying his personal needs and the way he lives,' said Mr. Gibson, 'we hay, , ye produced for him buildings and furniture tbe', will help him to feel that he is an individual an not too divorced from the civilian world.'

In other words, good design is being used bY the Army both because it is more economical than bad design and because the new kind of scienae soldiers—and particularly their wives—need to be wooed away from attractive jobs in industry. I 3;11 sure that when the Congress lectures are I , lished, in a month or so, nothing will converr other organisations to a good design policy 1110Ie surely than the Army story. But there will be plenty of other good evidence for sceptical servants, hoteliers and other large-scale buyers including a remarkable account of how 013°, production design has lowered costs in school 'building in the Midlands. the on' in' purl' der f he age ol0