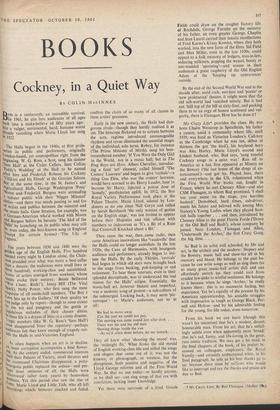 Cockney, in a Quiet Way

BY COLIN MAcINNES Ilup is a coelacanth, an incredible survival , In 1961, he can lure audiences of all ages Pock into a make-believe of fifty years ago: t4to a vulgar, sentimental, hard, humane world already vanishing when Marie Lloyd last sang

The Halls began in the 1840s, at first prole- tarian in public and performers, originally ,London-based, yet cosmopolitan right from the beginning. W. G. Ross, a Scot, sang his sinister '2411.1 Hall' at the Cyder Cellars, Sam Collins 'Toddy's Wedding' at the Hall to be named after him and Frederick Robson his Cockney IsvilliKins and his Dinah' at the Grecian Saloon. out at the same time, in the St. James's and Agricultural Halls, George Washington 'Pony' Moore and Frederick Burgess were serenading a sedater public with their 'Nigger Minstrel' ditties—and there was much passing to and fro °t artists and publics between the minstrel and the music halls. Gene Stratton, for example, was a German-American who'd worked with Moore 4114C1 Burgess before he became 'The Idol of the 1131411s' by launching on its public what may still e, even today, the best-known song in England i'ceePt for certain hymns)—`The Lily of -aguna.'

The years between 1850 and 1880 were the golden age of the English Halls. Five hundred °Petted every night in London alone, the Chair- 4,,lart presided over what was more a beer-cellar ;'ati a theatre, the audiences were small (two or _''''t.ee hundred), working-class and uninhibited. 'cores of artists emerged from nowhere, whose ria,ines evoke their natures: Bessie Bellwood l'o'ot Cheer, Riah 1'), Jenny Hill (The Vital Spark), Nelly Power, who first sang the most Cove of all music-hall numbers, 'The Boy I n Sits up in the Gallery.' Of their quality we ailt judge only by report—though to same extent I' the wit and pungency and the gentle or lugubrious melodies of their chosen ditties. ill these life is a dream of bliss or,a comic disaster. l'agic numbers (like W. G. Ross's 'Sam Hall') 0011 disappeared from the repertory—perhaps audiences felt they knew enough of tragedy out- side the the Halls in mid-Victorian England.

As often happens when an art is in decline,

4 ° inner corruption accompanies a final flower- bug. As the century ended, commercial interests ttliiilt their Palaces of Variety, small theatres and b e communal Chairman disappeared, a petty- hb°orgeois public replaced the artisan—and per- aps most ominous of all, the Halls were discovered' (after forty years) by benevolent 14hetes. Yet this period also saw the rise of ;e40, Marie Lloyd and Little Tich, who all left recordings which, however cracked and faded,

confirm the claim of so many of all classes to these artists' greatness.

Early in the new century, the Halls had dan- gerous rivals—though they hardly realised it as yet. The bioscope, flickered on to screens between the acts, ragtime introduced unmanageable rhythms and revue eliminated the essential magic of the individual, solo turns. Robey, for instance (The Prime Minister of Mirth), sang his best- remembered number, 'If You Were the Only Girl in the World, not in a music hall; but in The Bing Boys are Here. Albert Chevalier, introduc- ing a fatal 'art' element, called himself 'The Costers' Laureate' and began to give 'recitals'—a thing Gus Elen, who was the costers' laureate, would have scorned to do. Harry Lauder, later to become Sir Harry, injected a potent dose of 'homely,' presbyterian ' uplift. In 1912, the first Royal Variety Performance took place at the Palace Theatre. Marie Lloyd, adored by Lon- doners as no one since Nell Gwyn and called by Sarah Bernhardt 'the only woman of genius on the English stage,' was not invited to appear before their Majesties and risk offence with numbers so indecorous as 'It's a Bit of a Ruin that Cromwell Knocked about a Bit.'

Then came the war, then ,came radio, then came American innovations like 'vaudeville' that the Halls could no longer assimilate. In the late 1920s, the Cave of Harmonies, with bourgeois audience and performers, already began to imi- tate the Halls. By the early Thirties, 'revivals' had begun in which old stars were brought back to the stage from busking, pub-keeping or sad retirement. To hear these veterans, even in their splendid, decrepitude, was to understand the real reason for the Halls' eclipse. Essentially, the music-hall art, however blatant and imperfect, was a sardonic song of protest—a sub-culture of the submerged.. Looking back, it may seem 'pic- turesque': to Marie's audiences, not so at

all : , We had to move away 'Cos the rent we could not pay, The moving-van came round just after dark . . .

There was me and my old man Shoving things inside the van --As we'd often done before, let me remark. . . .

They all knew what 'shooting the moon' was, the 'midnight flit.' What broke the old mould of English working-class life and stilled the songs and singers that came out of it; was not the kinema, or phonograph, or wireless, but the disruptions, both positive and negative, of the Lloyd George reforms and of the First World War. So that no one today—or hardly anyone, as we shall see—can sing songs of that era with conviction, lacking inner knowledge.

Yet there were survivals of a kind. Gracie

Fields could draw on the rougher factory life of Rochdale, George Formby on the memory of his father, an even greater George. Chaplin and Stan Laurel carried their lunatic recollections of Fred Karno's Krazy Komics, where they both worked, into the new form of the films. Sid Field and Max Miller, even in the late 1930s, could appeal to a folk memory of lodgers, mas-in-law, seducing milkmen, popping the weasel, boozy or star-studded `spooning'—and arouse in their audiences a great raspberry of the Old English Adam at the 'keeping up appearances' outside.

My Crazy Life* provides the clues. He was born Chaim Weintrop in Spitalfields, his father a cantor, amid a community .where life, until 1939, was hard as Victorian London's. Call-boy at the Cambridge when he was ten, debut at thirteen (he got 'the bird'), his boyhood hero was Alec Hurley, Marie Lloyd's second and kindest husband, who, Bud says, 'sang tuneful Cockney songs in a quiet way.' Ran off to America as a lad, first appeared at Miners on the Bowery (`the last home of the dregs of en- tertainment')—and got by. Played here, there and everywhere in the US, volunteered when the First World War broke out, fought France, where he met Chesney Allen—and also CSM Flanagan, to whom Bud promised, 'I shall . use your name on the stage, you horrible bastard.' Demobbed, hard times, cab-driver, meets his future and beloved wife among Mrs. Stancey's Young Ladies when they played Scot- tish halls together . . . and then, introduced by Chesney Allen to the great Florrie Forde ('Down at the Old Bull and Bush'), whose company he joined. Next London, Flanagan and. Allen, 'Underneath the Arches,' the first Crazy Gang, the big time. . . .

So Bud is an artist well schooled, by life and art, in the archaic and the modern: Stepney and the Bowery, music hall and show-biz all in his memory and blood. He belongs to the past be- cause he can write songs as well as sing them (as so many great music-hall artists did) and can effortlessly switch (as they could too) •from crudest low-jinks to wistful sentiment. He belongs to it because when he sings 'Arches,' he really knows them: this is no mannerist feeling, but experience. Yet he's equally of the present by his American apprenticeship, his amiable struggles with impresarios as tough as George Black, Par- nell and Hylton—and by his admirable feeling for the young, for life today, even tomorrow.

From his book we can learn (though this wasn't his intention) that he's a modest, decent, honourable man. From his art, that he's unfail- ingly subtle' even when apparently most 'broad,' that he's sad, funny, and life-loving in the great, rare comic tradition. We may get a bit tired. in the final chapters of the book, of his praises be- stowed on colleagues, employers, the Royal Family—and certainly embarrassed when, in his final parAgraph, he tells us his best thanks go to us; because there must be millions who would like to interrupt and say the thanks and praise are due to Bud.