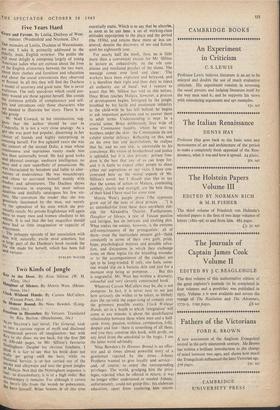 Grace and Favour. By Loelia, Duchess of West- minster. (Weidenfeld and Nicolson, 25s.)

THE memoirs of Loelia, Duchess of Westminster, are not, I take it, primarily addressed to the elderly, male, English reviewer. The public she Will most delight is composea largely of young American ladies who are curious about the lives of the English aristocracy between the two wars, about their clothes and furniture and education and about the social conventions they observed or flouted. In all this they will find the Duchess a model of accuracy and good taste. She is never Malicious The only anecdotes which could pos- sibly wound are those against herself. She avoids the common pitfalls of complacency and and introduces only those characters who are needed to illustrate her story. There is no idle gossip. Mr Noel Coward, in his introduction, sug- gests that the author should be cast as `-inderella. It is not a very 'close analogy. As a girl she was poor but popular, discerning in her Choice of friends and highly enterprising in the consort of the second Duke, a man whose restlessness and capricious vanity made him less than universally loved. He had good looks and Physical courage, mediocre intelligence, no taste and a rare superfluity of possessions. He Was excruciated by boredom and liable to aber- rations of malevolence. He was misanthropic and chose to surround himself mainly with 'toadies and adventurers. The Duchess shows great restraint in exposing his most odious qualities and dutifully catalogues his few vir- tues. She convinces the reader that she was by fascinated by the man, not merely °Y the splendour of his state which she pro- saically retails. No private Englishman will again /nve so many men and women obedient to his .NN, hints. It is sad that the last tnagnifico should Have had so little imagination or capacity of enloYment. The unhappy episode of her association with 'Irn will, naturally, excite most attention, but large part of t Duchess's book rcord the ''ufe she made forhe herself, which hase been full liud various.