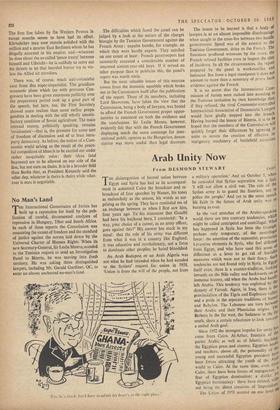 Tim International Commission of Jurists has built up a reputation for itself by the pub- lication of careful, documented analyses of repression in Hungary, Tibet and South Africa. In each of these reports the Commission was measuring the extent of freedom and the standard of justice against the norms laid down by the Universal Charter of Human Rights. When its new Secretary-General, Sir Leslie Munro, acceded to the Tunisian request to send an Investigation Panel to Bizerta, he was moving into fresh territory. He was asking three distinguished lawyers, including Mr. Gerald Gardiner, QC, to enter an almost uncharted no-man's-land.

'Yes, It( s hl■n A. bur I /tare to admit his hcart's in the right place.' The difficulties which faced the panel can be judged by a look at the nature of the charges brought by the Tunisian Government against the French Army : napalm bombs, for example, on which they were hardly experts. They satisfied on one count at least : French paratroopers had summarily executed a considerable number of unarmed sixteen-year-old boys. If it served no other purpose than to publicise this, the panel's report was worth while.

But the most valuable lesson of this exercise comes from the domestic squabble which broke out in the Commission itself after the publication of the report. Three of its members, including Lord Shawcross, have taken the view that the Commission, being a body of lawyers, was bound to afford the French Government proper oppor- tunities to comment on both the evidence and the conclusions. Sir Leslie Munro, however, evidently felt that with the French Government displaying much the same contempt for inter- national public opinion as the Hungarian, denun- ciation was more useful than legal decorum. The lesson to be learned is that a body of lawyers is at an almost impossible disadvantage when caught in the cross-fire between two hostile governments. Speed was of the essence to the Tunisian Government, delay to the Fren‘h The Tunisians proffered witnesses by the score: the French refused facilities even to inspect the sites of incidents. In all the circumstances, the report prepared by the panel is workmanlike and balanced. But from a legal standpoint it does not amount to more than a summary of prima facie evidence against the French.

It is no secret that the International Cony mission of Jurists were rushed into acceding to the Tunisian invitation by their knowledge that, if they refused, the rival Communist-controlled International Association of Democratic Lawyers would have gladly stepped into the breach. Having learned the lesson of Bizerta, it is to be hoped that the members of the Commission will quickly forget their differences by agreeing 10 unite to secure the creation of effective in vestigatory machinery of battlefield atrocities.