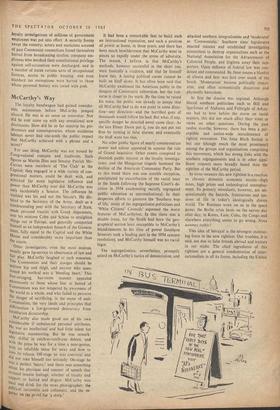 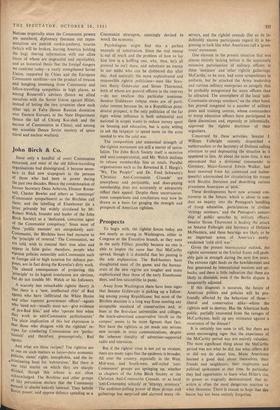 The loyalty bandwagon had gained consider- able momentum before McCarthy jumped aboard. He was in no sense an innovator. Nor did he ever come up with any sensational new disclosures. How did he so far outstrip his pre- decessors and contemporaries, whose assiduous labours never had one-tenth the public impact that McCarthy achieved with a phrase and a scowl?

For one thing, McCarthy was not bound by Congressional customs and traditions. Such figures as Martin Dies and Senator Patrick Mc- Carran were members of 'The Club' at the Capitol; they engaged in a wide variety of con- gressional matters, could be dealt with, and achieved far more legislative influence and Power than McCarthy ever did. McCarthy was Only incidentally a Senator. The influence he Wielded was his and not the Senate's. He dic- tated to the Secretary of the Army, dealt as a condescending peer with the Secretary of State, made personal treaties with Greek shipowners, sent his minions Cohn and Schine to straighten things out in Europe, and generally comported himself as an independent branch of the Govern- ment, fully equal to the Capitol and the White House and considerably more important than the courts.

Other investigators, even the most zealous, usually gave lip-service to observance of law and fair play. McCarthy laughed at such nonsense. The Communists and their stooges should be smitten hip and thigh, and anyone who ques- tioned his method was a 'bleeding heart.' This free-swinging, bar-room manner appealed enormously to those whose fear or hatred of Communism was not tempered by awareness of the world as a whole, and who failed to perceive the danger of sacrificing, in the name of anti- Communism, the very ideals and principles that differentiate a law-governed democracy from totalitarian dictatorship. McCarthy also made good use of his own considerable if unbalanced personal attributes. He was no intellectual and had little talent for legislative manoeuvring. But he was remark- ably skilful in catch-as-catch-can debate, and With the "press he was for a time a near-genius, With an infallible sense for news and how to time its release. Off-stage he was convivial and did not take himself too seriously. On-stage he was a perfect 'heavy,' and there was something about his physique and manner of speech that aroused intense feelings, whether of loyalty and support or hatred and disgust. McCarthy was Meat and drink for the news photographer, the Political cartoonist and columnist, , and the re- Porter on the prowl for 'a story.' It had been a remarkable feat to build such an international reputation, and such a position of power at home, in three years; and there has been much bewilderment that McCarthy went to pieces so rapidly under the stress of adversity. The reason, I believe, is that McCarthy's methods, however successful in the short run, were basically a madness, and that he himself knew this. A lasting political career cannot be built on bluff alone. It has often been said that McCarthy awakened the American public to the dangers of Communist subversion, but the con- verse is closer to the mark. By the time he raised his voice, the public was already so jumpy that all McCarthy had to do was point in some direc- tioo—any direction—and the horrified gaze of thousands would follow his lead. But what, if any, specific danger he descried never came clear. As the late Elmer Davis put it, you do not put out fires by turning in false alarms; and eventually the bluff wore too thin.

No other public figure of nearly commensurate power and colour appeared to assume the role of Grand Inquisitor. Other events conspired to diminish public interest in the loyalty investiga- tions; and the Hungarian tragedy hastened the decline of the American Communist Party. But to this trend there was one notable exception, precipitated by exacerbation of the racial issue in the South following the Supreme Court's de- cision in 1954 condemning racially segregated public education as unconstitutional. In their desperate efforts to preserve the 'Southern way of life,' many of the segregationist politicians and 'White ,Citizens' Councils' espoused the worst features of McCarthyism. In this there was a double irony, for the South had been the geo- graphical section least susceptible to McCarthy's blandishments in his time of power (southern Senators took a leading part in the 1954 censure resolution), and McCarthy himself was no racial bigot.

The segregationists, nevertheless, promptly seized on McCarthy's tactics of denunciation, and attacked southern integrationists and 'moderates' 89 'Communistic.' Southern' state legislatures enacted statutes and established investigating committees to destroy organisations such as the National Association for the Advancement of Coloured People, and frighten away' their sup- porters. Open defiance of federal law was con- doned and commended. By these means a blanket of silence and fear was laid over much of the South 'Moderation' became politically impos- sible, and often economically disastrous and physically hazardous.

At first the disease was regional. Although liberal southern politicians such as Hill and Sparkman of Alabama and Fulbright of Arkan- sas had to bow before the storm on racial matters, this did not much affect their votes or views on other questions. During the past twelve months, however, there has been a per- ceptible and nation-wide recrudescence of rightist extremism. The John Birch Society is but one (though much the most prominent) among the groups and organisations comprising this movement, which has strong links with the southern segregationists and is in other signi- ficant respects more broadly based than the rightism of the McCarthy period.

In some measure this new rightism is a reaction to chronic domestic economic strains—high taxes, high prices and technological unemploy- ment. Its primary stimulants, however, are un- questionably the hazards, frustrations and ten- sions of life in today's ideologically cloven world. The Russians score on us in the space game; the Berlin crisis beats on the nerves day after. day; in Korea, Laos, Cuba, the Congo and elsewhere everything seems to go wrong. Notts sonunes uahis This idea of betrayal is the strongest motivat- ing force in the new rightism. Our troubles, it is said, are due to false friends abroad and traitors in our midst. The chief ingredients of this rightism are a general condemnation of inter- nationalism in all its forms, including the United Nations (especially since the Communist powers are members), diplomacy (because our repre- sentatives are pinkish cookie-pushers), treaties (which will be broken, leaving America holding the bag), sharing information with our allies (most of whom are ungrateful and unreliable); and an historical thesis that the foreigri dangers we confront today—a vastly strengthened Soviet Union, supported by China and the European Communist satellites—are the product of treason and bungling stemming from Communist and fellow-travelling sympathies in high places, as among Roosevelt's advisers (hence we allied ourselves with the Soviet Union against Hitler, instead of letting the two tyrannies chew each other up), at Yalta (hence Russian dominion over Eastern Europe), in the State Department (hence the fall of Chiang Kai-shek and the success of Communism in China), and among our scientists (hence Soviet mastery of space travel and nuclear warfare).