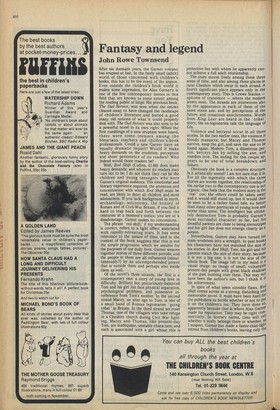 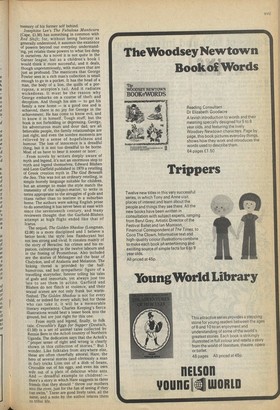 After six dormant years, the Garner volcano has erupted at last. In the fairly small (adult) world of those concerned with children's books, this has to be the event of the season. Even outside the children's book world it makes some impression, for Alan Garner's is one of the few contemporary names in this field that are known to some extent among the reading public at large. His previous book, The Owl Service, was seen when the smoke cleared away to have changed the landscape of children's literature and buried a good many old notions of what it could properly deal with. The Owl Service was also seen to be a powerful novel in its own right. When the first rumblings of a new eruption were heard, there were some tremors among the librarians, teachers and children's-book professionals. Could a new Garner have an equally dramatic impact? Would it make heavy demands on the erudition, perception and sheer persistence of its readers? Who indeed would those readers be?

Well, Red Shift (Collins, £1.60) does make heavy demands; and whoever its readers may turn out to be, I do not think they can be the children and young teenagers who were Garner's original audience. The emotional and literary experience required, the attention and concentration with which Red Shift must be read, are likely to deter all children and most adolescents. If you lack background in myth, archaeology, astronomy, the history of Roman and of Civil-War Britain, if you find it hard to leap back and forth between the centuries at a moment's notice, you are at a disadvantage. Garner makes no concessions.

The phrase 'red shift,' if my understanding is correct, refers to a light effect associated with rapidly-retreating stars. It has some relevance to the nature of time, and in the context of the book suggests that this is not the simple progression which we assume for the purposes of our daily lives. Garner weaves together stories of three different periods; and the people in them are all influenced (simultaneously?) by an uncomprehended power that is outside them and perhaps also inside them as well.

Of the novel's three strands, the first is a • contemporary one: a story of young love in difficulty. Brilliant but precariously-balanced Tom and his girl Jan face physical separation, psychological problems, and possessive interference from Tom's mother. In the second strand Macey, an alter ego to Tom, is one of a small band of Roman legionaries 'going tribal' in Britain. In the third strand we meet Thomas, one of the villagers who take refuge in a Cheshire church during Civil War fighting. Macey and Thomas, like present-day Tom, are inadequate, unstable characters; and each is associated with a girl whose rble is protective but with whom he apparently cannot achieve a full adult relationship. The story moves freely among these three areas of time, and also among three places in rural Cheshire which recur in each strand. A fourth significant place appears only in the contemporary story. This is Crewe Station — epitome of transience — where the modern lovers meet. The strands are interwoven also by the appearance in each of them of the

same stone axe, and by perceptions of the future and conscious anachronisms. Words, from King Lear are heard in the 'tribal story; the ex-legionaries talk the language of GIs.

Violence and betrayal occur in all three stories. In the two earlier ones, the violence is bloody massacre; but Macey and Thomas survive, keep the girl, and save the axe to be found again. Modern Tom, a disastrous per'son, betrays Jan by selling the axe, and murders love. The ending for this couple appears to be one of total breakdown and failure.

Obviously the book is a complex structure. Is it artistically sound? I am not sure that it is. For all the ingenuity with which the three stories are woven together, the relationship of the earlier two to the contemporary one is not organic. One feels that the modern story is the ' real ' one; the others could be taken awaY and it would still stand up, but it would then be seen to be a rather banal tale, no better than many other portrayals of young love and worse than some. The intelligent but ultimately destructive Tom is probably Garner.5 most successful character so far, but his dreadful parents are close to being stereotypes and his girl Jan does not emerge clearly as a person. Nevertheless, Garner may have turned his main weakness into a strength. In past books his characters have not matched the size of his stories. In Red Shift, Tom, his girl and his parents match the size of their story, because it is not a big one; it is not the size of the whole book. The image left in my mind is 3 visual image: an image of small, vulnerable present-day people with great black shadovis of the past looming over them. This may nat have been the author's aim, but I think it is his achievement. In spite of what seem sizeable flaws, Red, Shift comes across as a strong, disturbing and memorable novel. It must have been hard far the publishers to decide whether or not to pat it on the children's list. They have done SO, apparently because that is where Alan Garner made his reputation. They may be right corn: mercially. In literary terms, time will tel whether it really belongs there or whether, as, I suspect, Garner has made a faster-than-le' retreat from children's books, leaving only the

memory of his former self behind.

Josephine Lee's The Fabulous Man ticora (Cape, £1.50) has something in common with Red Shift; for, without being fantasy as generally understood, it assumes the existence of powers beyond our everyday understand' ing, yet relates these powers to what lies deep in ourselves. As a novel it is not quite in the Garner league, but as a children's book I would think it more successful, and it deals, though unpretentiously, with matters that are just as profound. The manticora that George Fowler sees in a rich man's collection is small enough to go in a pocket. It has the head of a man, the body of a lion, the quills of a porcupine, a scorpion's tail. And it radiates wickedness. It must be the reason why George embarks on a course of theft and deception. And though his aim — to get his family a new home — is a good one and is achieved, there is no joy for George in the achievement. He has come to know evil, and to know it in himself. Tough stuff; but the book is not forbidding or depressing. George, his adventurous mum and dour dad, are all believable people, the family relationships are just right, and even the sombre moments are relieved by a sense of hopefulness and humour. The loss of innocence is a dreadful thing, but it is not too dreadful to be borne. Most of us have to bear it sooner or later.

From novels by writers deeply aware of myth and legend, it's not an enormous step to myth and legend themselves. Edward Blishen and Leon Garfield published in 1970 a retelling of Greek creation myth in The God Beneath the Sea. This was not an ordinary retelling, in simple homely language suitable for children, but an attempt to make the style match the immensity of the subject-matter, to write in terms appropriate to the struggles of gods and titans rather than to teatime in a suburban home. The authors were asking English prose to do something it has never been at ease with since the seventeenth century, and Many reviewers thought that the Garfield-Blishen attempt at high flight ended like that of Icarus.

The sequel, The Golden Shadow (Longman, £2.00) is a more disciplined and I believe a better book: the style less flamboyant but not less strong and vivid. It consists mainly of the story of Heracles: his crimes and his expiation, culminating in the twelve labours and in the freeing of Prometheus. Also included are the stories of Meleager and the boar of Chalydon, and of Atalanta and Melanion. The linking thread is provided by the halfhumorous, sad but sympathetic figure of a travelling storyteller, forever telling his tales of, gods and immortals, yet always just too late to see them in action. Garfield and Blishen do not flinch at violence, and their sexual scenes are not only frank but warmfleshed. The Golden Shadow is not for every child, or indeed for every adult; but for those who can take it, it will be a memorable literary experience. Charles Keeping's fierce illustrations would beat a lesser book into the ground, but are just right for this one.

From myth and legend, finally, to folk tale. Crocodile's Eggs for Supper (Deutsch, £1.50) is a set of animal tales collected by Rennie Bere in the Acholi country of Northern Uganda. The dedication says that the Acholi's "proper sense of right and wrong is clearly shown in this collection of stories." But I wonder. Like folktales from anywhere else, these are often cheerfully amoral. Hare, the hero of several stories (and obviously a man in fur) tricks Lion out of a dish of beans, Crocodile out of his eggs, and even his own wife out of a plate of delicious white ants. And — dreadful example to children! — there's a story in which Hare suggests to three friends that they should "throw our mothers Into the river, just for the fun of seeing if they can swim." These are good lively tales, all the same, and a note by the author relates them to tribal life.